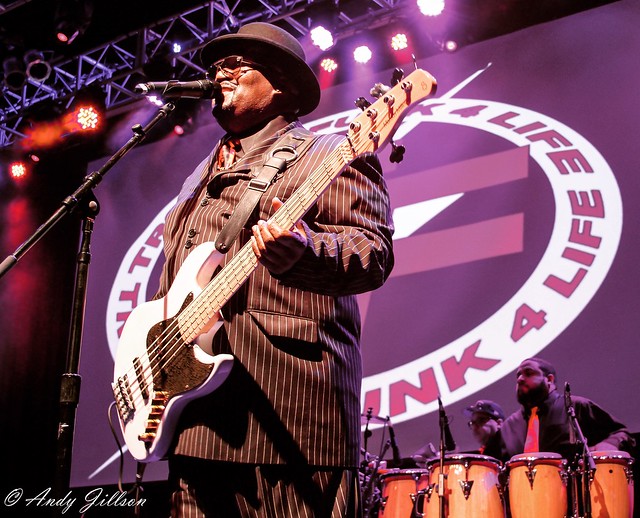 Trouble Funk have done it again, folks. This time they brought their pioneering DC go-go sound to The Fillmore Silver Spring recently, and they did not disappoint.

DC native Tony “Big Tony” Fisher and the other members of Trouble Funk played yet another funk-fueled set of go-go classics to a packed house at The Fillmore on Sunday, Feb. 17 for the “Presidents’ Day Throwback Throwdown.”

Trouble Funk seemed to still be buzzing following their recent performances at Blind Whino (where they were also inducted into the Official Hip-Hop Museum) and The Anthem (where they opened for George Clinton & Parliament Funkadelic and Trombone Shorty & Orleans Avenue).

I was fortunate enough to be spend some time with the band backstage at The Fillmore prior to their performance. The members of Trouble Funk (12 in total) were in high spirits, seemed relaxed, and said they were “more than grateful” and “excited” to be playing on a bill alongside their friends, and other highly-influential bands, Experience Unlimited (EU) and Rare Essence (RE).

Trouble Funk were dressed to kill when I arrived in their dressing room. Every member of the group was sharply dressed, ditching their usual casual attire (which features them in black and gold Trouble Funk shirts).

When being called to the stage I walked alongside with the band onto an elevator at the back of The Fillmore Silver Spring. About six of us were all quickly lifted to the stage entrance where I walked onto the stage with Trouble Funk and was greeted by at least 1,000 cheering fans. The room was loud and electric. The sound of the crowd hit me hard and their enthusiastic vibes were contagious. It was truly a unifying celebration.

Trouble Funk funked up the crowd and left their fans in awe. They played a near flawless 12-song set featuring fan favorites and go-go anthems, “Hey Fellas,” “Pump Me Up,” “TF Express,” “E Flat Boogie,” “Drop the Bomb,” and “Don’t Touch That Stereo.”

I crotched behind instruments, amplifiers, drum sets, and lighting gear to obtain the shots I wanted. Once in the photo pit, I ran back and forth, trying out multiple lenses and different angles since the circumstances were right and the opportunity was there. All of that while Trouble Funk’s driving beat and infectious grooves were making shake my moneymaker. I found it extremely difficult to refrain from gettin’ down in between taking my photos. I was tired and soaked in sweat, but loved every moment of it!

Overall, this whole experience was a lot of fun. Trouble Funk was funking amazing! It was surreal for me. I have attended hundreds of concerts throughout my life, and have photographed quite a few at this point too, and I have never been allowed this type of access before (well other than with The Flaming Lips).

Hats off to Trouble Funk for keeping go-go and great live music going for so many years. They played from their hearts and it showed.

Here are some photos of Trouble Funk performing at The Fillmore Silver Spring on Feb. 17, 2019. All photos copyright and courtesy of Andy Jillson.