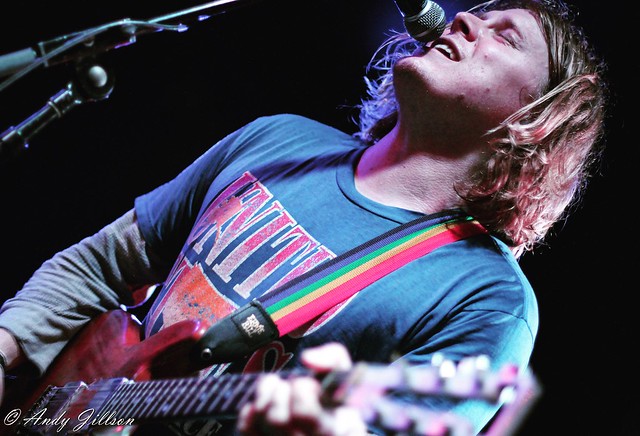 As a rule, I never miss an opportunity to catch a performance by prolific garage rocker and rock ‘n’ roll slave Ty Segall. This time around, he paid a visit to Ottobar in Baltimore with fellow musical genius and American musician/singer-songwriter Tim Presley aka White Fence.

I’ve seen Ty Segall four times in the past, but those shows were mainly Segall as a solo artist. This was my first time having the pleasure of seeing Ty Segall & White Fence perform. I wasn’t exactly sure what to expect or how the energy of the music would translate, but of course I was not one bit disappointed.

The sound and energy of Ty Segall & White Fence in some ways seems to be tailormade for me. It’s a clever mix of folk, psychedelic, stoner, garage, punk, and pop rock. Their songs are well-crafted, short, and to the point. The sound of Ty Segall & White Fence has all the epic fuzzy-ass guitar noises you can dream of careening into sweet angelic harmonies, slithering bass and drum rhythms, and a somewhat purposely sloppy delivery from all four musicians involved. Even the fans were somewhat purposely sloppy. The venue wreaked of beer and stale cigarette smoke. The band were drinking beer and a good amount of the audience were joining along.

Ty Segall & White Fence decided to team up again recently and released an album of new material titled Joy. This album is the follow-up to their 2012 collaboration Hair. These are both great indie rock albums in my opinion. Music that makes you feel high. You can just close your eyes and drift off into a druggy nirvana. Be careful though. Drift too far into euphoria and the album will be over. Ty Segall & White Fence newest record Joy clocks in at only 31 minutes. Don’t nod out or you’ll miss out, kiddies.

The show at Ottobar was sold out. The bar itself was really busy. The merch booth was busy, too. Ty had several different vinyl records for sale and a few t-shirts as well. After thoroughly scanning over all the vinyl, I wiped away the drool and began identifying my photographic vantage positions. Once zeroing in on my spots, I made my way through the smiling crowd. I was pressed firmly up against the stage for the whole show. Tim Presley aka White Fence smoked half a cigarette on stage, stomping it out on the floor right before the start of the first song. What followed was an electric church service and the best lot of concert photos I ever took at Ottobar.

For the first half of their set, I was directly in front of Tim. For the second half of the set, I bounced my way through the largely drunk crowd over to the side of the stage directly in front of Ty. Their entire set was electric and white hot. No acoustic guitar here folks. It was mainly straightforward heavy guitar-driven Captain Beefheart/The Electric Prunes-esque trippy garage rock songs. Songs that seem to be geared toward stoners and beer guzzlers with ADD. It’s plain for me to see after their live performance at Ottobar that Ty Segall & White Fence are a duo for a reason. That reason, I believe, is that they are simply two good-spirited/like-minded LA rock veterans who play well off each others musical strengths.

Basically what happened was Ty Segall & White Fence beautifully sped through an hour-long set of varied jangly power pop songs intertwined with fierce punk rock attitude and a laid back sunny California vibe. Songs they played that stood out to me were “Time,” “Please Don’t Leave This Town,” “Body Behavior,” “Other Way,” “Easy Ryder,” “Scissor People,” “Do Your Hair,” and “Good Boy.”

If you know about Ty Segall & White Fence, I would assume you already own a copy of their newest record, Joy, and that you have bought a ticket to see them at a venue near you. If not don’t waste anymore time. It would be wise of you to check this band out.

Here are some photos of Ty Segall & White Fence performing at Ottobar in Baltimore, MD on Feb. 25, 2019. All photos copyright and courtesy of Andy Jillson.