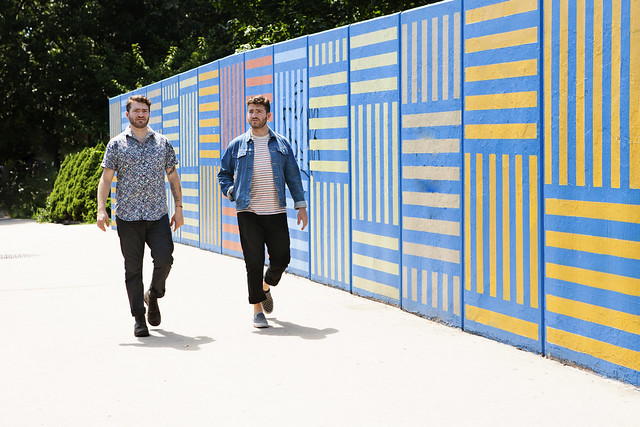 The Brother Brothers, identical twins Adam and David Moss, brought their folk duo act to The Hamilton on Tuesday night, where they were enthusiastically received.

The duo has recently opened Shakey Graves and Lake Street Dive, and has received positive reviews for debut LP Some People I Know. As identical twins, their voices matched perfectly, allowing them to achieve to impeccable two-part harmony in the finest tradition of brother bands. The beautiful, minimalist instrumentation — Adam on fiddle, David on guitar (and a little cello) — provided just enough embellishment to highlight their fine voices.

Steam Some People I Know by The Brother Brothers on Spotify:

The Brothers said that DC is the “heaviest” town they play. All the issues they see throughout the country lead back here, they said. The last song of their set addressed gentrification. The Brothers have spent a lot of time in DC over the last 15 years, and they’ve seen it change. One of them was bartending in their now-homebase of Brooklyn at a bar that’s more than 100 years old, and watching the people who’d made the neighborhood what it is driven out by rising rents and property values.

The natural world has a strong influence on The Brother Brothers, as it does for many folk artists. After “Bird in a Tree,” “a song about a tree,” they told the audience they were looking forward to spring, as they get the winter blues. They find beauty in all the seasons, however; “Red and Gold” was written on one of the most beautiful days of fall by Lake Winapasaki.

Based on the twins’ last name, I had suspected that they were Jewish like me, and they confirmed this during the show. Living in New York now, they hail from Peoria, Illinois. Opening act Dead Horses also come from the Midwest — from Wisconsin. The Brothers noted they had one dynamic with the Horses, as fellow Midwesterners, and another, being Jewish Midwesterners. I related very much to that statement; as much as I can relate to my fellow native Ohioans, I am also defined by my difference from the majority of them.

Little ghost towns dot the landscape of southern Illinois along the Mississippi River. These towns, The Brothers told the audience, enjoyed prominence as shipping centers, but the railroads have long since made them obsolete. In “Cairo, IL,” they sing about the poverty and racism that pervades these towns today.

Besides being Midwesterners, The Brother Brothers and the Dead Horses share a love for the music of Townes Van Zandt. For their encore, The Brothers had the Horses join them onstage to perform Townes’s “simplest” song, “If I Needed You.” With one of the twins’s encouragement, the audience sang along with the chorus. It was a fitting end to a fine show indeed.