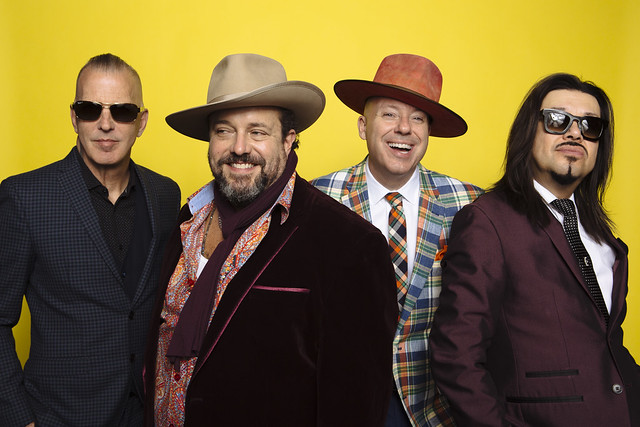 The Mavericks (Photo by David McClister)

Not long ago, The Mavericks released Brand New Day, their ninth studio album and their first on their own label, Mono Mundo Recordings. Founded in 1989, the quartet continue to celebrate their newfound freedom with a show at the Lincoln Theatre on Friday, March 8.

The new collection — co-produced like its immediate predecessors by the band’s golden-voiced singer Raul Malo and Niko Bolas (Neil Young, Warren Zevon, Melissa Etheridge), who is partnered with the band in the new Mono Mundo imprint — features the core members of the group since their reformation: Raul, drummer Paul Deakin, guitarist Eddie Perez, and keyboardist Jerry Dale McFadden, along with auxiliary members “the Fantastic Four” filling out the set’s brawny sound with their signature accordion and horns. The band took its time recording the new record.

Raul said, “My thinking is always that you can make the best record you can make if you really labor over the parts, the editing, the songs, take your time. I wanted to specifically get to the point where you’re trimming the fat off the songs and making as succinct and as concise a good little pop record as you can make. That was really the goal.”

Watch the official music video for “Easy As It Seems” by The Mavericks on YouTube:

In a review for AllMusic, Mark Deming said the latest studio record from The Mavericks exhibits craftsmanship, style, and playfulness.

“There are more vintage pop and Latin influences at work on this LP than the group’s biggest hits of the ’90s, but anyone who has been following their post-Trampoline career will have no trouble recognizing this as The Mavericks, and Raul Malo’s voice is still smooth as silk and big as all outdoors,” Mark wrote.

As Raul said, “I live in Nashville, but I’m still as Cuban as if I was in Miami. But American music is such a beautiful landscape, and there are so many things to draw from. As a Latino, you’re trying to assimilate into this culture, and you’re taking it all in, and some of it grabs you by the throat and you can’t let go of it. All of it is part of your vocabulary. It’s all Americana, and now more than ever those differences, and that inclusion, need to be celebrated and need to be talked about.”