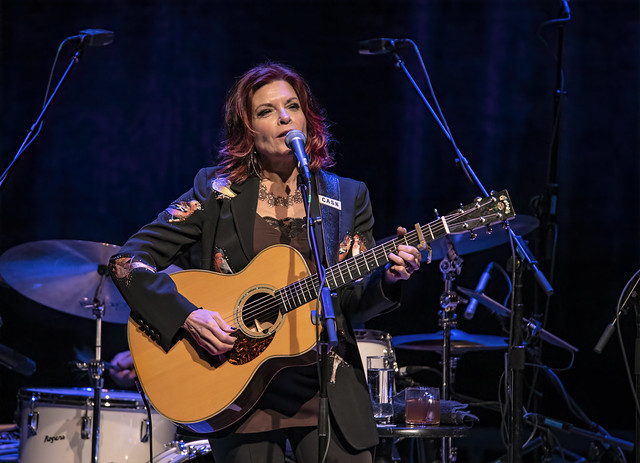 Rosanne Cash played a phenomenal concert of gorgeous, sophisticated songs and wonderful stories to a packed house of engaged and highly appreciative fans at Bethesda’s Strathmore Music Center on Friday night with her husband and musical partner John Leventhal at her side as bandleader.

The scion of the Cash family delivered a spellbinding performance more than worthy of the family name. It was perfect music for a Friday night, thoughtful and reflective with flavorings of southern Americana, enhanced by the stateliness of the venue.

Rosanne began the show with a trio of songs from her Grammy-winning 2014 album, The River and The Thread (which won Best Americana Album). The album, she told the audience, is about “the dark, mysterious south,” especially the Mississippi delta.

First, she sang “A Feather’s Not a Bird,” a double Grammy winner for Best American Roots Song and Performance. Rosanne experienced a minor technical difficulty, and after the song she said, gesturing to the equipment on her backside, “I need my friend to come out and see what’s wrong with my pack.” Taking in an eyeful, John suggestively quipped, “There’s nothing wrong with your pack,” and Rosanne replied, “Thank you, John.” Throughout the evening, Rosanne and John displayed such warmth and playfulness with each other, and their dynamic had undeniable charm.

After the tech fixed Rosanne’s equipment, she spoke about the next song, “Sunken Lands.” In 1811, the New Madrid earthquake felt as far away as New York burst open land in several Arkansas counties, submerging large portions of it in water. In the 1930s, FDR’s New Deal created a farming settlement, and the Cash family moved to it. Rosanne’s song celebrates her grandmother, Carrie Cash, “who was married to an unkind man.” A lot of the songs on The River and The Thread are set in and around Memphis, Rosanne said. “Etta’s Tune” tells the story of the marriage of Johnny Cash’s bassist, Marshall Grant, and his wife, who were together for 65 years, “a record for a touring musician touring.” The song begins with the first thing they said to each other every morning: “What’s the temperature, darling?”

Season Two of the HBO series True Detective opens with the song “The Only Thing Worth Fighting For.” Rosanne wrote the lyrics, and T Bone Burnett wrote the music. Lera Lynn sang the version recorded for the show. Rosanne liked the song so much, she recorded it on her most recent album, last year’s She Remembers Everything. “These are the most personal songs I’ve written in a long time,” Rosanne said of the album. “Women my age still have a lot to say, and less time to say it.” She described She Remembers Everything as “gothic, feminine, time travel, rage-filled songs.”

Introducing another song from that album, “The Undiscovered Country,” Rosanne told the audience that she’s been married to John for 24 years and, “When you’re in a long-term relationship, things become more precious because you realize that you one of you will die and leave the other.” John chimed in, “I’m not planning on leaving.”

Stream She Remembers Everything by Rosanne Cash on Spotify:

Introducing “Not Many Miles to Go,” Rosanne said, “Here’s another song about about mortality, but fun with mortality.” After playing the song, John remarked on the irony of playing a song about a Telecaster on a Stratocaster. Soon, the band left the stage, leaving Rosanne and John together to play what she called “a centerpiece of American roots music,” “Long Black Veil.” After the song, Rosanne said, “they don’t write them like that anymore. You don’t words like ‘scaffold’ in Top 40 songs.” While “Long Black Veil” came from a famous list of essential roots songs given to her by father, Johnny, “Ode to Billie Joe” came from Rosanne’s list.

The band came back, and Rosanne told the audience, “Sometimes I think all I need is the Delta and the Beatles,” launching into “Things We Said Today.” The next song, “Blue Moon With Heartache,” she wrote at 23, younger than her youngest daughter is now, and she got the copyright back last year.

Rosanne said she was thinking about her daughters a lot lately. She said, “We need the voices of young women at the table, sometimes even deciding what’s on the menu.” Rosanne told the audience that in “She Remembers Everything,” she explores how it would be both a burden to remember everything as well as a “comfort to have it locked away.”

Several years ago, Rosanne had brain surgery for a Chiari malformation, an entrapment of the cerebellum in at the top of the spine. She couldn’t get out of working a show in Germany, and she felt absolutely awful. In “Rabbit Hole,” Rosanne sings about how Billy Bragg and Joe Henry lifted her up at a time of need. Rosanne asked, “Can you take one more song about mortality?” before John switched to the piano for the “Everyone But Me.”

John and Rodney Crowell originally wrote “When the Master Calls the Roll” for Emmylou Harris. When they wouldn’t let Rosanne have the song after Emmylou continued not to record it, she really enjoyed learning where she was in the pecking in the order, Rosanne joked. Around the same time, her son Jakob, who just released his own first album, was studying the Civil War in the eighth grade. Members of the Cash family fought on both sides of the war. Rosanne did her own research into family history, and she discovered two unconnected Cash family members, William and Marianne. Eventually, Rodney and John relented, agreeing to let Rosanne have “When the Master Calls the Roll.” Rosanne then rewrote many of the lyrics to make it a song about the Civil War. In the song, she unites William and Marianne.

One day, on their trip through the Delta, Rosanne and John started in Greenwood, Mississippi, and drove to Mt. Zion Church, the site of Robert Johnson’s grave. Within walking distance is Bryant’s Grocery, the site of the brutal lynching of teenager Emmett Till, a critical event in the American Civil Rights Movement. Nearby, too, are Tallahachee Bridge, the farm where Howlin’ Wolf and Charlie Patton picked cotton, and the place where BB King was born and raised. Rosanne captured all of this in “Muddy Road.”

To close her set, Rosanne sang her biggest hit, “Seven Year Ache,” and it was met with a standing ovation. For her encore, John accompanied her on the piano for the traditional folk song “500 Miles Away From Home.” At the conclusion of the song, the audience rose again to show their appreciation. It was well deserved, as Rosanne put on an absolutely terrific show.

Here are some pictures of Rosanne Cash performing at the Strathmore Music Center on March 1, 2019. All photos copyright and courtesy of David LaMason. 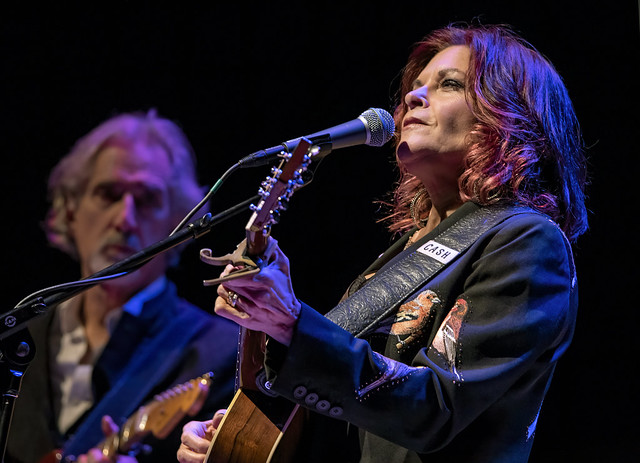 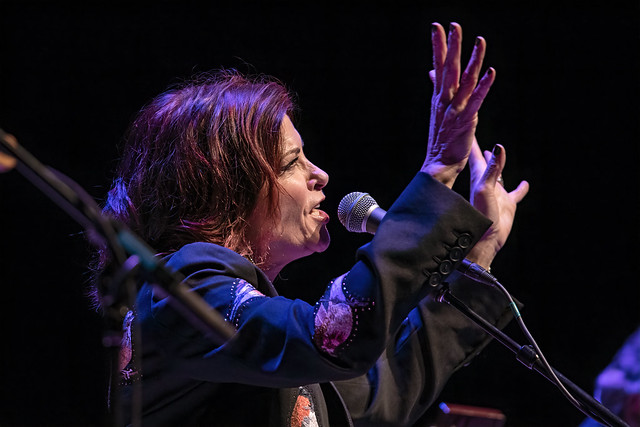 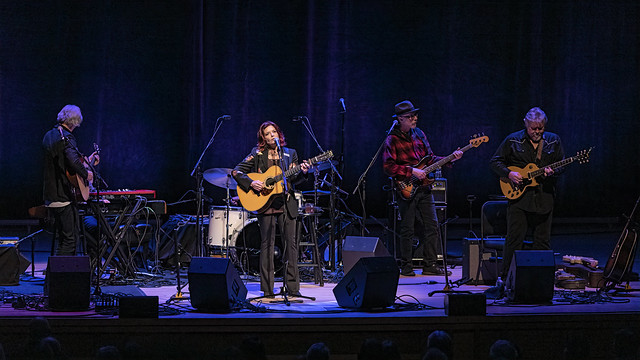 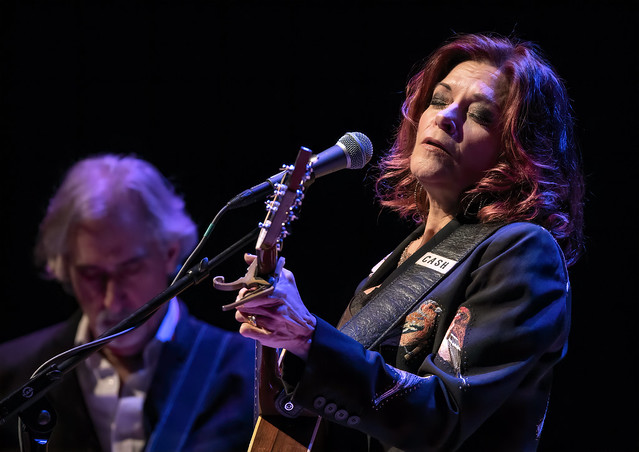 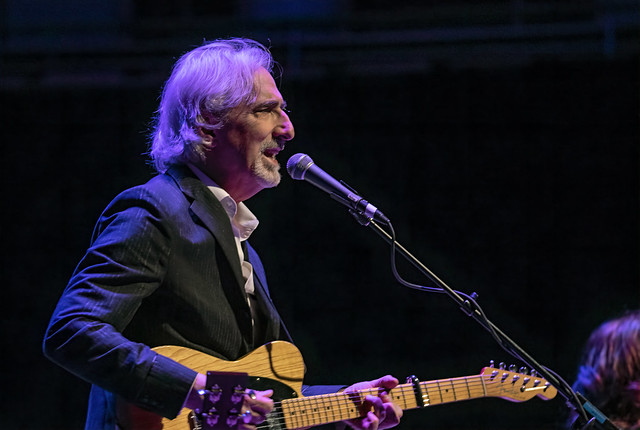 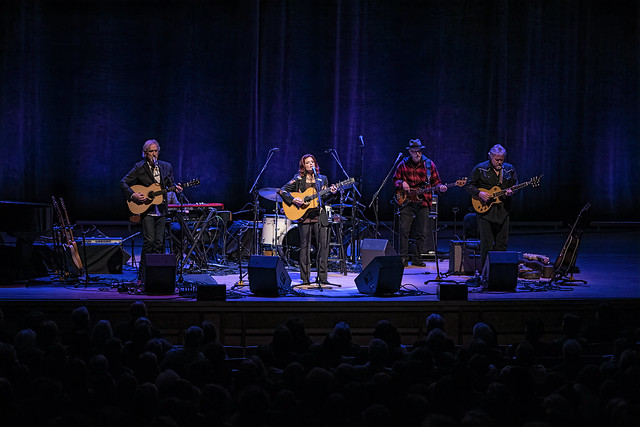 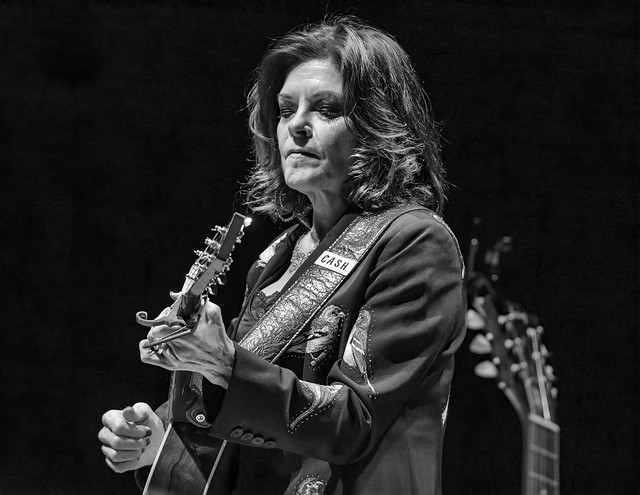 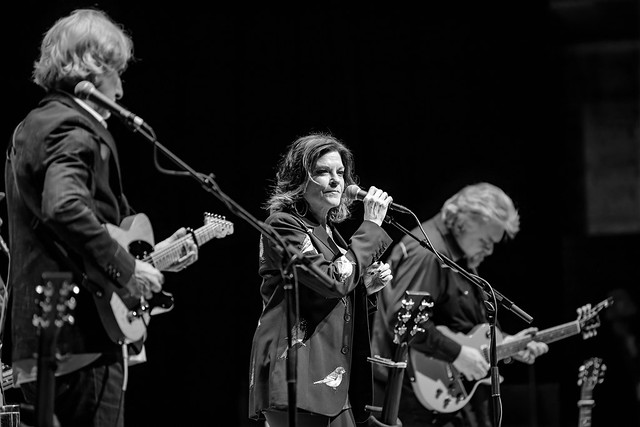 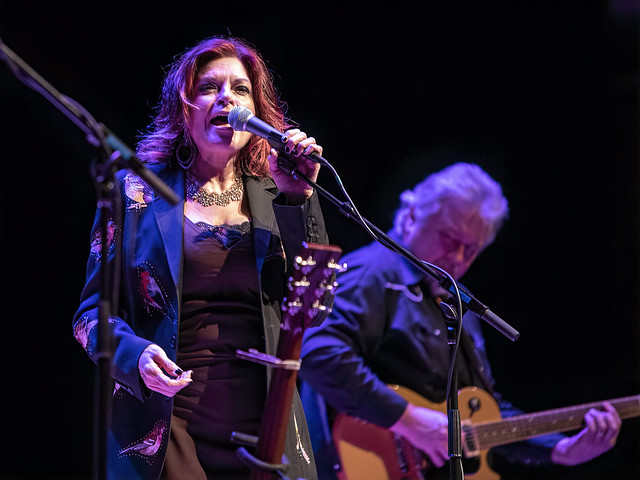 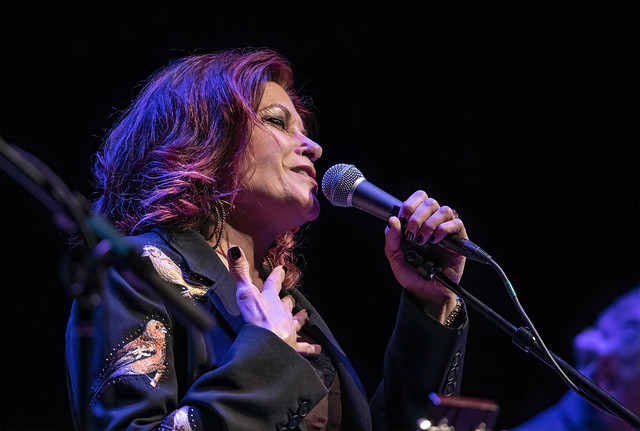 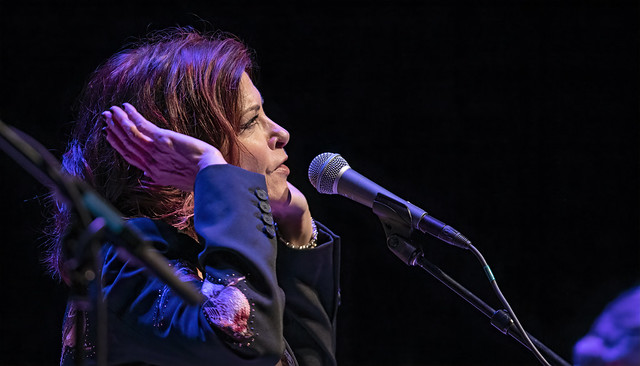 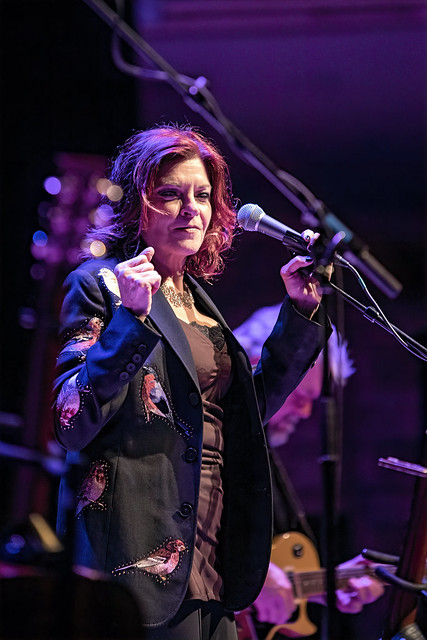 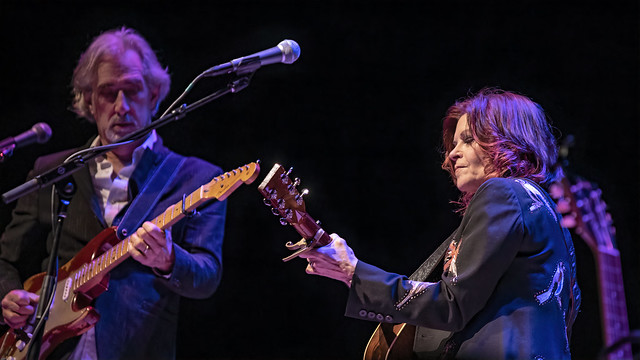 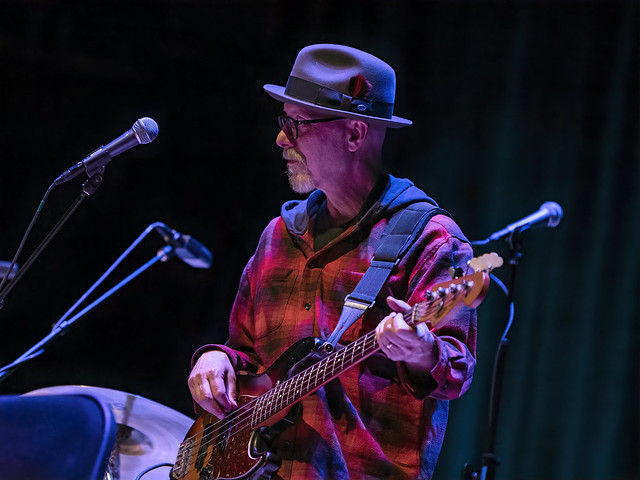 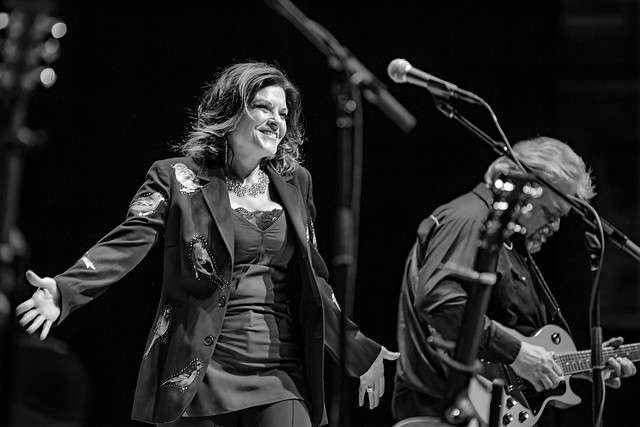