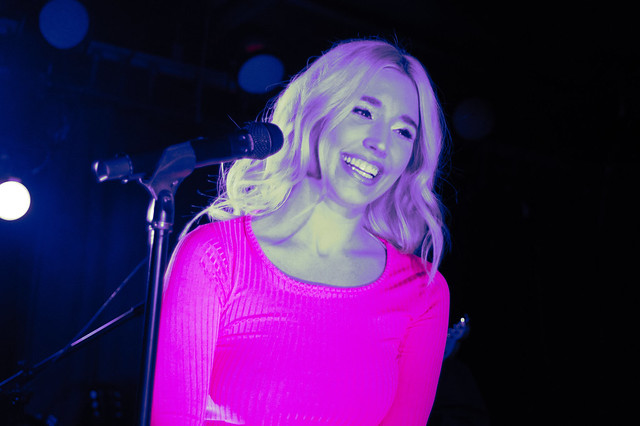 Chelsea Lee of SHAED performs at U Street Music Hall on March 2, 2019. (Photo by Brenda Reyes)

Recently at U Street Music Hall, SHAED (pronounced shade) took the stage to a packed crowd. It was a hometown show, and so it is always nice to come home and play with your closest friends and family. Interestingly enough, the first time I saw SHAED was not in DC but all the way in Chicago at Mamby on the Beach in 2017. So, I was glad to see them closer to home.

SHAED consists of Chelsea Lee (lead vocals) and Max and Spencer Ernst (vocals and producers). The band recently had wonderful success by being featured in the latest MacBook Air commercial with their song “Trampoline.” Their current Trampoline Tour is in support of the latest EP Melt, which was released in September 2018.

Chelsea, Max, and Spencer burst on stage to make DC proud. Their stage setup was minimalistic with a neon triangle right in the middle. They played some older singles like “Too Much” and “Perfume” to warm up the night.

My first impression of Chelsea on vocals was that she would a soft and tender voice as an electropop singe — electropop mainly supporting a soft-light range. But I was wrong in the best way! Chelsea can belt out some notes — especially in “Just Wanna See” — that blow you out of the water. Max and Spencer equally shared responsibilities for keyboard, synth, and guitar — and they kept everything flowing smoothly for their set.

It was amazing night for SHAED on March 2. It’s only a matter of time before SHAED will drop a full album after releasing two EPs to date. The future is bright for this electro trio.

Their US tour continues March 6 through 24, when it ends in St. Louis, Missouri. To catch SHAED again in DC, you can see them at DC101 Kerfuffle in May at Merriweather Post Pavillon. Buy your tickets online.

Here are some pictures of SHAED performing at U St Music Hall on March 2, 2019. All photos copyright and courtesy of Brenda Reyes.