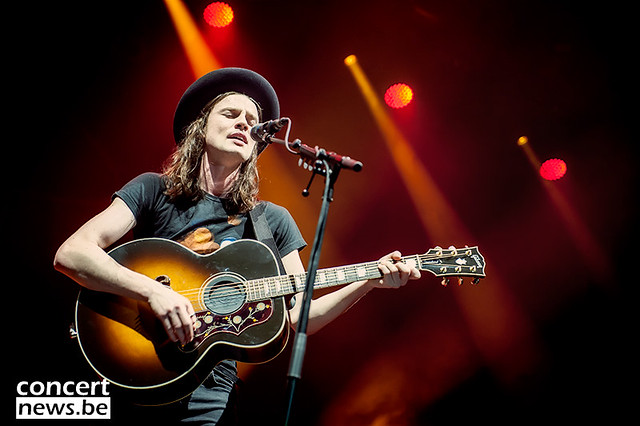 James Bay took to the stage for a long-awaited performance at The Anthem recently, and he proved without a doubt that he’s more than just a pretty face.

The English singer-ongwriter was scheduled to play in DC this past fall before he took to twitter last summer letting fans know that the tour would be re-scheduled to the Spring of 2019. That tour started earlier this month and the 3rd stop was DC’s The Anthem on March 8.

James took an interesting step with his new album Electric Light, which was released last year. It’s safe to say James took a lot more chances on this one, and I think he hit a home run. Between the strategically placed vocoder, synth, and electronic drum beats, it’s clear to see James wanted to branch out. He played a mix of songs from his first album and Electric Light on Friday night.

I only recently started closely listening to James Bay. I knew his more popular songs before I even knew who he was. That’s a good sign for a pop star. And a lot of people would classify James as a pop musician. Upon seeing him play live and reading some of his quotes, I’d like to think he’s more complex than that. Don’t let the catchy songs fool you, James is a true maestro at heart and I took notice of that throughout his performance on Friday.

First, I noticed that he was playing a different guitar for every few songs. I lost track after the first few, but I would say he used well over six guitars throughout the evening. A pop artist merely concerned about radio play wouldn’t likely use a different guitar in order to get the perfect sound in each song. It’s important to recognize the musicianship in an artist’s work, especially when it’s so clear how much pride they take in that aspect of their music.

As the evening progressed, I was more and more impressed by James’ guitar chops. There really aren’t guitar solos in his studio recordings, but he managed to break out a few during the show and that’s really when I took notice of how good of a guitarist he is.

His vocals are probably what he’s known best for but don’t write him off as a vocalist who only strums a few chords. This dude can play guitar. He also seemed to really draw energy from the fans. Numerous times he put his hand on his heart as if to show how much it meant to him to hear the crowd singing his songs back to him. He capped the evening off with a fantastic encore including the Beatles’ “Come Together” and his most well-known hit “Hold Back the River.” He got an enormous cheer as he took the stage and the electricity in the audience did not stop until he had played his final song.

James is still in the early stages of his music career, but he’s already managed to make a good name for himself with some solid songs that people have fallen in love with. I fully expect him to continue experimenting and adjusting his sound and making more interesting albums with songs that people will enjoy singing and performances that people like me truly appreciate. Check out some of his music below including his latest single “Peer Pressure” featuring Julia Michaels.