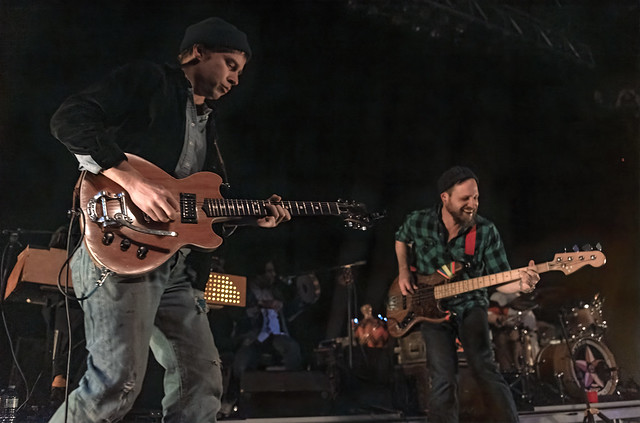 Dr. Dog is a powerhouse. Their most recent LP, Critical Equation, which was released last year, is their 10th album. Since releasing Critical Equation, Dr. Dog have been touring constantly, the band recently brought the house down to a sold-out Rams Head Live.

Now, Dr. Dog and Baltimore have some serious love for each other. The Philadelphia-based band has been coming back to the city for the past 15 years and playing to bigger and bigger audiences along the way. In fact, the last time they were in town they played with the Baltimore Symphony Orchestra.  This time around it was a rowdier affair but no less epic.

Part of the band’s magic comes from having two principal songwriters in Scott McMicken (vocals/guitar) and Toby Leaman (vocals/bass), who draw as much from sounds of bands like the Beatles than they do from folk and funk (seriously, listen to those drums and bass on “That Old Black Hole” or “Coming Out of the Darkness” and you’ll see what I’m talking about).  And the songs on that new album have a very cool vibe that is replete with warm harmonies, groove, and excellent song craft.

The band — which includes Toby, Scott, Zach Miller (keyboards), Frank McElroy (guitar/vocals), and Eric Slick (drums) — were joined by another percussionist/guitarist in front of a curtain of smoke as the stage was ringed with neon strips that changed color throughout the set.

Starting off their set with “Where’d All the Time Go?” from 2016’s Shame, Shame, Dr. Dog played through a heavy set of some of my favorites (and clearly the crowd’s favorites too) like the folkier “The Breeze” (by the way, I can’t remember how many mix tapes I made that included this gem 10 years ago) and “How Long Must I Wait?” In fact, some of the songs like “Lonesome” were transformed into a massive sing-a-long with shouted “Hey” from the entire venue. This was one of my personal highlights of the evening.

For the encore, the band played an additional five songs, including the aforementioned “Lonesome” (really it was that good!) and “That Old Black Hole.”

Dr. Dog continues their tour through September. Definitely check them out here!

Here are some more photos of Dr. Dog at Rams Head Live performing on March 9, 2019. All photos copyright and courtesy of David LaMason.