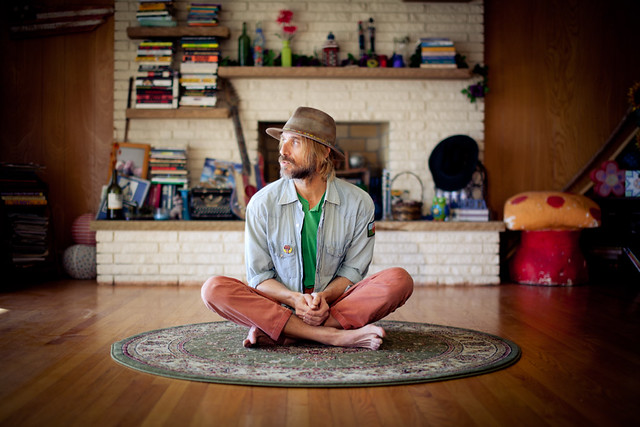 Todd Snider came to The Birchmere stage on Monday barefoot, accompanied by his adorable dog, Cowboy Jim, who also answers to “Bear.” As Cowboy Jim laid down, Todd said, “If you think he’s trained, just wait until he licks his balls.”

(Jim never delivered on that prediction, although he did, later, wander to the front of the stage by my table, where he received pets from some very friendly audience members.)

Todd continued, “If that’s not folky enough, I start with a song that begins ‘gather round,’ knowing full well that we are gathered, and not intending for us to huddle any closer.” Todd played a new song off the Cash Cabin Sessions, Vol. 3, “Talking Reality Television Blues.”

Todd chatted a bit, insisting that his are not serious, saying “Even the sad songs are not serious.” He talked about how he had started a song all the way back in Texas, and while he had never finished that song, his returning to that song over the years had led to “a song about about a song you’re working on,” called “Working On a Song.”

After that song, Todd said, “I’m to start playing shit I know.” He proceeded to tell a story about meeting a songwriter in Texas — Aaron Allen, who had written for Willie Nelson. Todd asked Aaron how he could be a better songwriter, and Aaron told him that he’d write better songs if he always kept his life set so that he could pack up and move in 15 minutes. Todd said that if you follow Aaron’s advice, you may never get better at being a human being, but you will write more interesting songs. “It takes a lot of discipline,” Todd said, “to keep my life as fucked up as I do.” Todd dedicated “Ballad of the Devil’s Backbone Tavern” to Aaron Allen, wherever he is.

Todd played several more songs — “DB Cooper,” “Too Soon to Tell,” and “Just Like Overnight” — before opening the floor to requests, which made up most of the rest of his show. They came in fast and furious from the hot crowd. “The other day I did an interview with who’s younger than my first album,” Todd said, before playing “Better Than Ever Blues, Part II,” and clarifying that there is, in fact, no Part I.

The next request Todd played, “Play a Train Song,” was covered by Robert Earl Keen at his appearance last at The Birchmere in June. Todd wrote this song about his late friend who road managed him for a while. That late friend became infamous in his East Nashville crowd for, some might say, heckling bands with demands that they “play a train song.”

Todd introduced “Horseshoe Lake” by saying that he wrote it on his first long tour, when a friend in Memphis was complaining about a job. He followed that with a long digression about his tour several years ago with the jamband supergroup The Hard Working Americans, describing ingesting a large quantity of a liquid hallucinogen that he’d been given at a show. After all, he’d had a bit the night before, and that had gone fine. The substance kicked in while Todd was in the shower, and he had trouble getting out, as the door seemed to move every time he almost had it.

Todd spent several minutes struggling to leave his hotel room but managed to make to it the lobby, where he once again faced doors that would not stay put. As Todd ran around in circles, a friendly doorman asked him what was going on and helped him leave the building. At this point, Todd couldn’t really remember what was going, and he ended sitting around with some homeless people. Eventually a couple of teenagers came up and said, “Aren’t you Todd Snider?” Todd looked up and said, “Yes! There’s somewhere I’m supposed to be!” One of the teenagers said, “We’re on our way to see you,” and Todd replied, “You’ve got to take me with you.”

The teenagers got Todd to the venue, where he met up with the rest of the band. Todd wanted to cancel, but the band said “that’s not how jam works.” (Todd prefaced this story by saying that all the jam bands are high as though this is news.) One of the other guys in the band gave him a banana, telling him it would help. Todd held onto that banana the whole show. While it did help, apparently, Todd told the audience at The Birchmere, it helps even more if you eat the banana.

After that long digression, Todd played several more requests: “Conservative Christian, Right-Wing Republican, Straight White American Males,” “Statistician’s Blues,” “Beer Run,” “Old Times,” “Carla.” Before playing “Alright Guy,” Todd digressed into another story, this time about how once, when he was out driving, he saw two cars getting closer and closer, until they hit each other and spun off the other the road.

Todd ran up to help, even as he heard sirens in the distance. He asked the driver of the first car, “Are you alright?” “I’m fine,” she said.” Todd ran up to the second car and asked its driver, “Are you alright?” She said, “Fuck no, I’m not alright.” “What’s wrong?” Todd asked. “You don’t look hurt.” The woman held up a pillowcase-sized bag of weed. “Ma’am,” he said, “I am here, and everything is going to be alright.” He took that weed and drove away.

“Alright Guy,” Todd said, he wrote when he had just broken up with a girlfriend, or “become homeless.” He just kept he repeating to himself to that he was an “alright guy.” His girlfriend wanted him to pawn his guitar and get a job. Calling back to earlier in the evening, Todd say, “I thought to myself, I can be out of here inside of 15 minutes.”

Todd closed his set with a song from the new album, “Like a Force of Nature.” Todd and Cowboy Jim left the stage, but a round of applause and a standing ovation brought them back for an encore. He began with “Can’t Complain.” The audience finally found out why he had a banjo when he said that he had heard that you can’t play the blues on a banjo, because it’s too happy. Todd talked for a minute about the blues: how the songs tend to start in the morning, how Townes Van Zandt said “There’s two kinds of music: the blues and Zippity Doo Da.” Todd then proved that you can play the “Blues on Banjo.”

In finishing his encore, Todd talked about the late Col. Bruce Hampton, a figure in the southern music community who died on stage while performing at his own 70th birthday tribute last year. Hampton, invented the Zambi religion, named after John Zambi, a kid from his hometown with perfect grades and SATs who wanted to break the speed record for driving backwards and broke every bone in his body, Todd said.

This likely apocryphal story bespoke genius, according to Col. Hampton. The tenets of this religion include the goal of dying on stage, and the saying of a secret, private prayer before every performance. Todd played a brief harmonica tune “For Col. Bruce E. Hampton, Ret.” to end the evening, and the audience came back to its feet, rewarding Todd for an exceptionally fun evening.