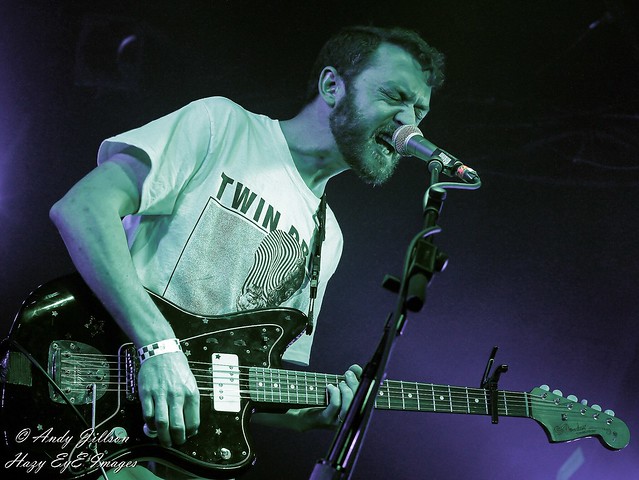 Prisms perform at Rock and Roll Hotel on March 26, 2019. (Photo by Andy Jillson)

I’m a fan and supporter of local music, and generally a fan of noisy/gloomy guitar driven rock songs accompanied by a splash of joy, positive vibes, and high energy. Strange combo I know, but that’s pretty much how I would describe Prisms sound and live presence.

Prisms, formed by three friends in 2007, played a short but powerful set to a handful of fans and dreamy onlookers at the Rock and Roll Hotel on March 26. I met with the singer and guitar player prior to their set and was granted full access to photograph the band from all angles. The audience left me plenty of space to move back and forth while taking my shots; and of course I was stopping every few minutes to absorb the music and allow myself to to swept away with Prisms nod-out sound.

The venue was quiet and still. I was immediately drawn to their music from the first note. Their music is subtle yet intense and produces somewhat of a natural high. Prisms played about a 30-minute set which included songs off their most recent album, Noise.

Listen to selected tracks from Noise by Prisms on Bandcamp:

Obviously by my opening sentence, I hear a bit of early- and mid-’90s Smashing Pumpkins in Prisms’ sound. I’m not big on comparing bands to other bands, but in this case it makes sense for me to do so. I heard nods to My Bloody Valentine, Sunny Day Real Estate, and Hum. Remember Hum?!? Anyway, Prisms definitely sounded pleasantly unique to my ear, and they seemed to have carved out their own musical style and path. Throughout their set, Prisms appeared to be enjoying themselves and sounded well-practiced. Some of their songs were slow and somewhat sad; other songs were more upbeat and optimistic. A fine mix in my opinion.

Prisms are a band well worth investing a little time and money into seeing perform live. Next time they’re around do yourself a favor and check ‘em out! Next, Prisms open for Starterjacket at the Velvet Lounge on Wednesday, May 1.

Here are some pictures of Prisms performing at the Rock and Roll Hotel on March 26, 2019. All images copyright and courtesy of Andy Jillson.