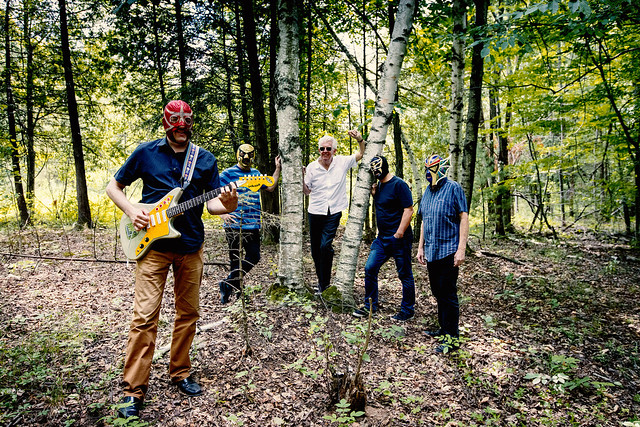 On May 17, Yep Roc Records will release the EP, the latest collaboration between the “master songwriter who never takes himself too seriously,” according to Rolling Stone, and Los Straightjackets, “America’s beloved masked men of surf-and-spy guitar instrumentals,” said a press release.

Recorded in upstate New York during a short break from touring, the collection features three new Nick Lowe originals and a cover of the Phil Spector-produced “Raincoat in the River.” Said Nick of this EP, “The Straightjackets definitely influenced these new songs. ‘Love Starvation’ was written very specifically with them in mind. It has a kind of Ritchie Valens feel to it that I thought might suit them.”

Listen to “Love Starvation,” called by Rolling Stone “Nick Lowe’s lovelorn new song with Los Straightjackets” that is “a twangy account of romantic fallout” on YouTube:

“That’s what’s really cool about a guy like Nick, that he’d agree to something like this,” Los Straightjackets guitarist Eddie Angel told Rolling Stone about the instrumental rockers’ collaboration with the veteran singer-songwriter. “We had nothing to lose. But he did: his reputation!”