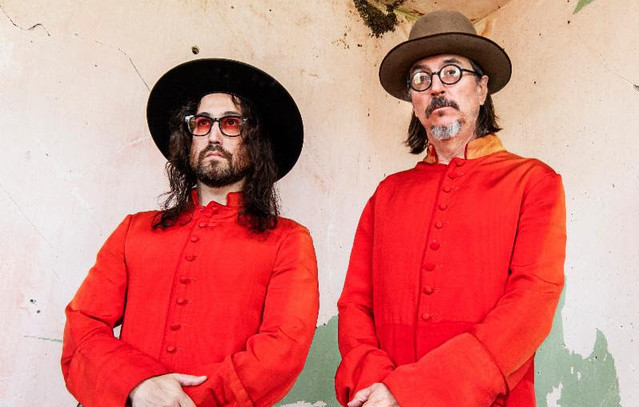 Primus bassist Les Claypool and multi-instrumentalist Sean Lennon have come together once again as the Claypool Lennon Delirium for their second collaborative album, South of Reality, and they will perform at the 9:30 Club on Wednesday, April 17.

“Music so potent it could repel an asteroid impact from space, these seasoned warriors of psychedelia have crafted timeless songs that may as well be chiseled in stone,” reads a press statement about the Claypool Lennon Delirium’s epic sophomore album. Says Rolling Stone, South of Reality “feels like an organic extension of Monolith of Phobos, blending the wildly surreal and psychedelic with satirical social commentary.”

Rolling Stone calls the six-and-a-half-minute “Blood and Rockets” “a sprawling epic that finds Lennon and Claypool crooning and snarling, respectively, over spacey synths and chiming guitars.”

Watch the Claypool Lennon Delirium perform “Blood and Rockets” on The Late Show with Stephen Colbert:

Les and Sean wrote, recorded, and co-produced their latest album themselves, with the Primus frontman engineering and mixing at his Rancho Relaxo studio in Sonoma County, California. “Basically it was the same setup in the same place,” Les told Rolling Stone about their process. “I am a creature of habit and have all my old vintage gear dialed in the way I like it, so I like to helm from the same spot.”

“Ideas always come quick for us,” Sean said, “and I think that’s why we like working together. But playing with Les is like knowing you’re gonna be playing tennis with Rafael Nadal — it makes you wanna brush up on a few things before you get on the court.”