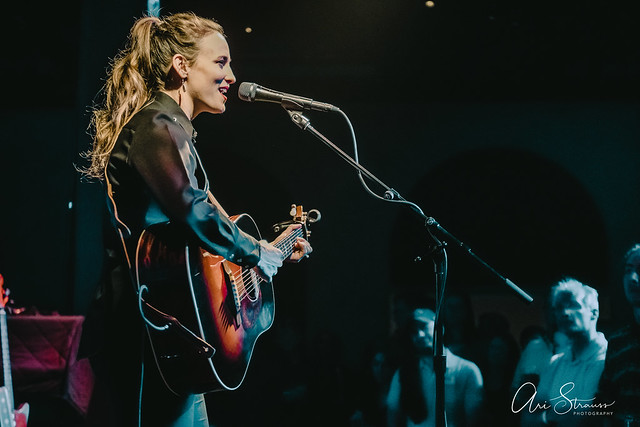 Dawn Landes performs at The Hamilton Live on April 7, 2019. (Photo by Ari Strauss)

In her fourth show touring with Nick Lowe’s Quality Rock & Roll Revue, Americana singer-songwriter Dawn Landes put on a stunning opening set. The Nashville resident played tracks from her last two albums, as well as a forthcoming EP and a musical she’s creating.

Playing solo with acoustic guitar, Dawn demonstrated her chops as a skilled player, with some sophisticated chords, drawing on sources like Mississippi John Hurt.

Dawn’s musical style differs from most of Nick Lowe’s work, but it should be remembered that Nick’s discography includes one of the best Americana albums ever made, The Impossible Bird. Johnny Cash covered one of the tunes from it, “The Beast in Me,” on his American Recordings, and the Travelin’ McCourys, who just won a Grammy for Best Bluegrass Album, covered “I Live on a Battlefield.” What Dawn does falls within the scope of the Nick Lowe corpus.

Opening her set, Dawn said, “Here’s a song for anyone who ever wondered why they name whiskey after men,” and played “Why They Name Whiskey After Men,” from last year’s album, Meet Me at the River. Dawn recorded the album with legendary producer Fred Foster, who made records with Roy Orbison, Dolly Parton, and Willie Nelson. She told the audience that Fred didn’t seem to think that she’s a songwriter, seemingly believing that she was just a “singer from New York.” He thought he was supposed to “get her some songs. That’s what they used to do.” She told him, “No, Fred, this is my sixth album.” Still the collaboration proved fruitful, as the album received widespread critical acclaim, and holds an impressive 86 percent rating on Metacritic.

Stream Meet Me at the River by Dawn Landes on Spotify:

Dawn played several more songs from the album, including “Keep on Moving,” “Traveling,” “What Will I Do,” and “How to Say I Love You.” Going to the Women’s March here in DC influenced “Keep on Moving.” “It’s a long drive from Nashville,” Dawn said. In “Traveling,” she sings about moving from New York City to Nashville with her husband and her dog. Dawn quipped that she moved to get a yard for the dog.

After “Keep on Moving,” Dawn played her most streamed track, “Make a Fire Burn Again,” from her 2014 album, Bluebird, which won the 2015 14th Annual Independent Music Award for Folk/Singer-Songwriter Album of the Year. Later, she played the title cut, which is built around some really nice Mississippi John Hurt blues chords. Before she played the song, she asked for a dollar. She explained that, according to legend, when Johnny Cash first went to play at the Grand Ole Opry, he was told there no drums allowed, so he put a dollar bill through the strings of his guitar.

The next two songs, “Twilight” and “I’m Your Momma,” came from Dawn’s upcoming Mother’s Day EP, “Tiny Twilight,” which is inspired by her two-year old daughter. Before “I’m Your Momma,” she asked if there were any parents present, and said how much she appreciates what they do, now that she is one. She then gave a soulful, a capella performance.

“Oh, Amelia” comes from the musical that Dawn is writing about Tori Murden McClure, the first woman to row across the Atlantic. In 2015, Dawn gave a TED talk about the subject. In the song, a bird lands on Tori’s boat, and she hallucinates that the bird is Amelia Earhart; the two have a conversation. Dawn said that an album of songs based on this project are coming. She finished her set a cover of “Moon River.”

Here are some pictures of Dawn Landes performing at The Hamilton Live on April 7, 2019. All photos copyright and courtesy of Ari Strauss. 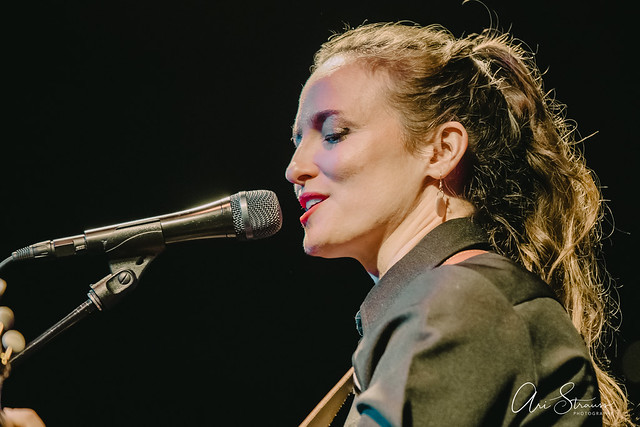 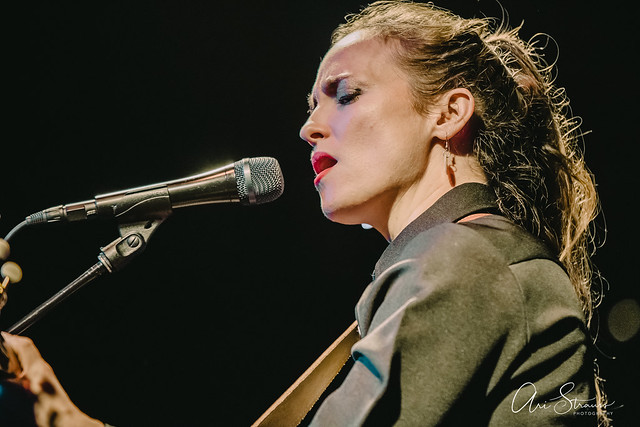 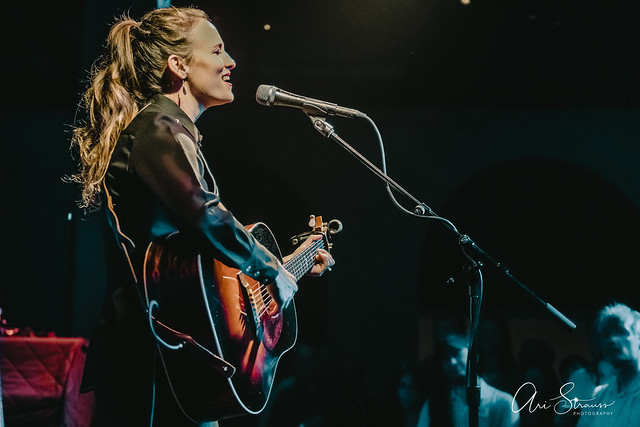 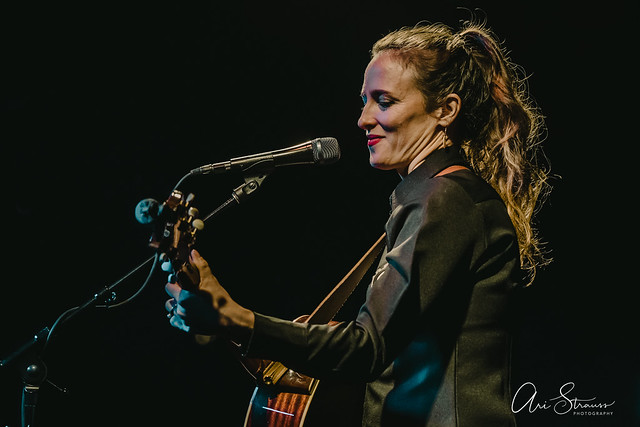 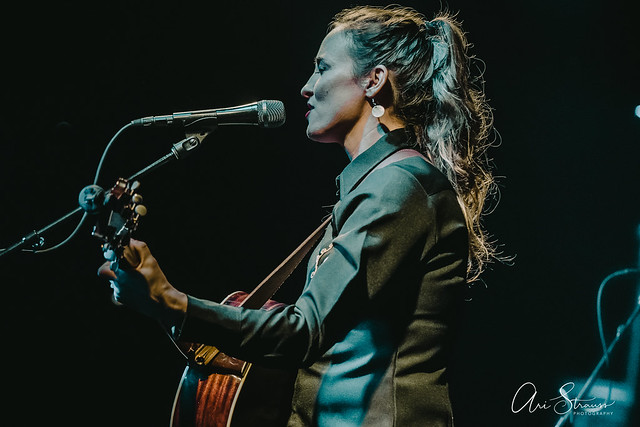 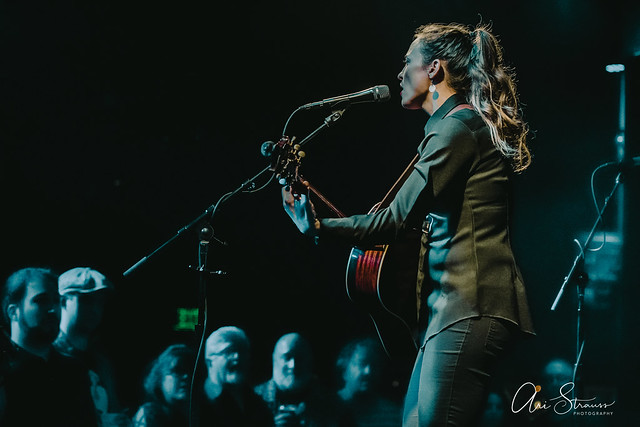 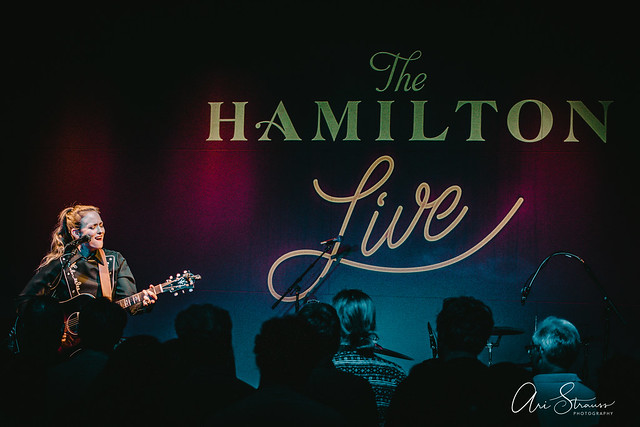 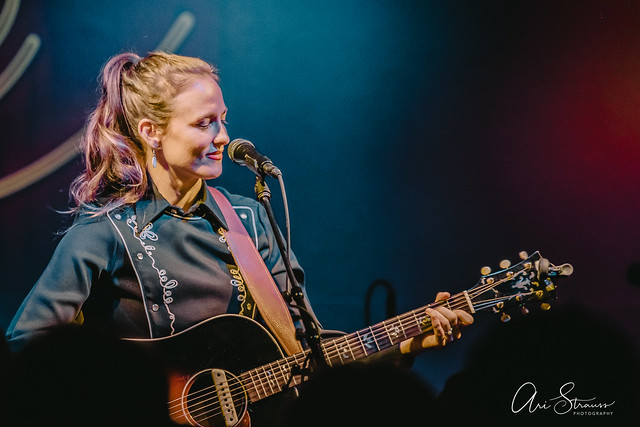 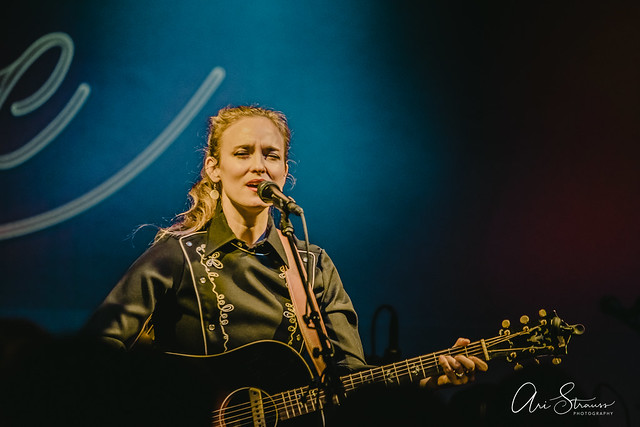