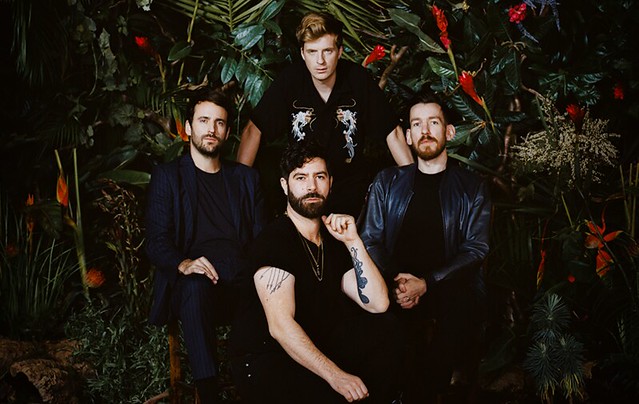 English rock quartet Foals are back with a new album, Everything Not Saved Will Be Lost – Part 1, released in March via Warner Music, and Yannis Philippakis and company headline two nights at 9:30 Club! The first night is sold out, but you can see Foals at 9:30 Club on Thursday, April 18.

“Big and adventurous…vibrant and versatile,” said NPR Music. “Post-punk thrust, math-rock patterns and splintered lyrics mirror the daily dystopian media barrage,” said The New York Times, as The FADER writes that Foals’ latest album “feels like the band taking stock of what works and amplifying each element — embossing their sound and creating something more themselves than ever before.”

Watch the official music video for “Café D’Athens,” which Noisey called a “rollicking journey through several mind states; full of dreamy vocals but pinned down with strong percussion”:

About the track, Foals lead vocalist and lead guitarist Yannis Phillipakis said to Noisey: “‘D’Athens’ was the outcome of me trying to teach myself how to use Logic properly. I wanted to break away from loop pedals and cassettes, which was how I was demoing stuff for the last ten years, and try and record myself in a more modern way. I stumbled across that marimba loop which threads throughout the track and ‘Cafe D’Athens’ was the result. The band jammed it a couple times, and added some bits, I worked on it in Paris separately, and used a fretless bass for the first and probably last time.”

Every pair of tickets to Foals’ second-night show at 9:30 Club on Thursday, April 18, purchased online includes your choice of a CD or digital copy of Everything Not Saved Will Be Lost – Part 1, released just last month. Part 2 is slated to be released this autumn.

“They’re two halves of the same locket,” Yannis said about the two-part releases — separate but related. “They can be listened to and appreciated individually, but fundamentally, they are companion pieces.”

The 20 tracks of Everything Not Saved Will Be Lost – Part 1 and the forthcoming Part 2 are said to “defy expectation” and “are exploratory, progressive-tinged tracks… alongside atmospheric segues which make the music an experience rather than a mere collection of songs.”