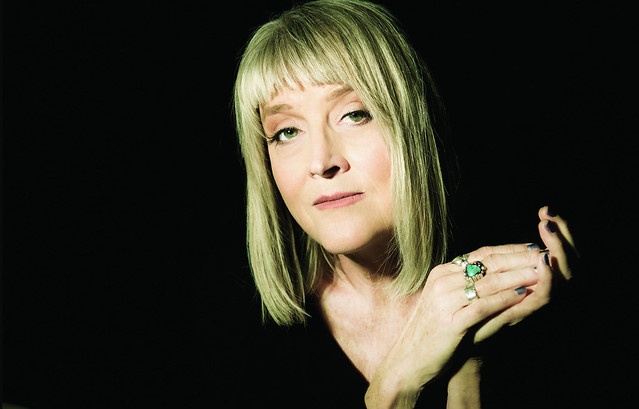 Originally from Dayton, Ohio, Kim Richey travelled the world even before she launched her music career. That journey led her to Jammin’ Java recently.

After college, Kim passed through Colorado, Boston, Europe, and South America, stopping in Bellingham, Washington, before moving to Nashville with her then-boyfriend. She worked a stint as a cook at the renowned Bluebird Cafe, “before I learned how to cook,” for which she sincerely apologized. Kim was almost 40 when she released her critically acclaimed self-titled debut LP in 1995. By this time, however, she already established her reputation as writer, co-authoring Radney Foster’s hit song “Nobody Wins.” In the past several decades, Kim has consistently released well-received her own albums, written with numerous other songwriters, and served as a vocalist for distinguished artists such as Rodney Crowell.

On April 17 at Jammin’ Java, Kim performed in a trio with a pair of Aussies, Jordie Lane and Claire Reynolds. Kim played the acoustic guitar, while Jordie played electric guitar and Claire played the keys. The duo from Down Under contributed harmony vocals to Kim’s stunning leads. They also opened the show. During the intermission, I had a short but pleasant chat with Claire and another patron about one of their songs that involved the Australia coal town of Bulleye that blew up, and the related issue of the Centralia, Pennsylvania mine fire, which has been raging for close to 60 years, and shows no signs of slowing down.

As one of my fellow audience members had said before the show, Kim is an entertaining performer who knows how to interact with the audience. She got things warmed up with a few songs: “Every River” from 1997’s outstanding album, Bittersweet, the title cut of 2013’s Thorn in My Heart, and “Come Around” from 1999’s Glimmer. After her third song, Kim gestured at a tabled section of seating that was somewhat isolated and jokingly asked, “What are you back there? Are you cordoned off?”

Kim told the audience that she moved to Nashville in 1988. While she has mostly lived in Nashville since then, she spent five years in London, “but my money ran out and now I’m back in Nashville.” This served to introduce the fourth piece of the evening, “Londontown,” co-written with Nate Campi and released on Thorn in My Heart.

Being from Ohio, Kim said, she looked at the magazine Garden and Gun ironically. As it turned out, it gave her inspiration for the song “Angel’s Share.” The title refers to the portion of whiskey that evaporates when it ages in a wooden barrel. Kim and her co-writer agreed to write a song with this title; he had come up with a happy take on it, hers was sad, and she “won that argument.” She said, “That’s my superpower, I can make anything sad.” Kim mused about how reflecting on songwriting can take her to where she worked on a piece; “Angel’s Share” takes her back, every time, to a cup of coffee at her kitchen table.

After the trio played “Jack and Jill” from 2007’s Chinese Boxes and “The Way It Never Was” from 1999’s Glimmer, Kim remarked that Glimmer is 20 years old. She said that she is in the process of an all-acoustic remake of the album. Kim released Edgeland, her most recent album, via Yep Roc in 2018.

A rather interesting incident followed. Kim introduced “Something More,” co-written with Neilson Hubbard, telling a story about the songwriter at a show with a bunch of young performers eager to “break out.” As Neilson knew, this was it — they **had** made it. As the trio went to play to the play the song, an audience member near the stage said she had Neilson on the line, holding up her phone for Kim. Unfortunately, the signal dropped before the story could get any juicier.

While Kim didn’t dwell overmuch on Edgeland, she did play a series of three series from the album. The second was “The Get Together,” co-written by Mando Saenz. Mando cuts an unusual figure in Nashville. While Chicano groups such as Los Lobos and the Mavericks have ventured into the Americana spaco, Mando is a Mexican country singer-songwriter, and a very talented one at that.

Kim co-wrote “Pin a Rose on Me” with Chuck Prophet, a talented singer-songerwriter who I’ve seen several times. He first made waves in the ’80s with the Paisley Underground band Green on Red, cited as an influenced on Uncle Tupelo by Jeff Tweedy. In addition to Kim, Chuck also co-wrote Alejandro Escovedo’s excellent album Real Animal.

Kim tied up her set with three more songs: “Those Words We Said” from her debut album, “I’m Alright” from Bittersweet,” and “Leaving 49,” a rocker from 2010’s Wreck Your Wheels. She explained that she doesn’t believe in making a production out of leaving the stage for her encore, and she transitioned seamlessly into “Straight as the Crow Flies,” the words that adorned her t-shirt. Jordie and Claire left the stage, and Kim played the tender ballad “A Place Called Home,” which had aired on the TV show Angel. Jordie and Clarie returned for the last song of the night, the upbeat, “This Love.”

After her show ended, Kim made a beeline to the merch table to sign and interact with fans. I had barely stood and found myself looking up at Kim, who is quite tall. She had already come down from the stage and traversed the tabled section of the venue. “Hi,” she said, and I think I responded in kind. In that brief moment, Kim came across as friendly and engaging, as well as an extremely talented songwriter with a golden voice. You’ll be equally as charmed when you catch her next show.