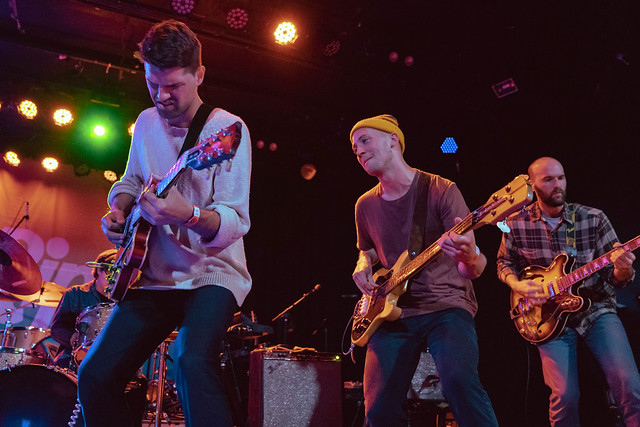 Seattle-based soul group The Dip took DC’s Union Stage back to the ’60s recently with their passionate and authentic performance that left the audience wanting more.

Before I get into the band, let me just mention that Union Stage is a fantastic little venue to catch a show. Right near DC’s waterfront, they’ve got a nice selection of craft brew to go along with some delicious pizza. My wife loved the pizza and that’s saying a lot considering she generally feels pizza in the DMV doesn’t hold a candle to that of her home state of New Jersey.

The Dip caught my attention as soon as I heard them. If you were to listen their music without knowing when it was from, they could pass just as easily as a band from the ’60s or ’70s as they could a band in 2019. Being a ’90s child, I missed out on bands like The Temptations, The Supremes, etc. Sure I can still enjoy their music, but seeing them in their prime has never been an option. With bands like The Dip, Motown fans in their 20s and 30s can catch a glimpse of what live music was like during that era.

Not only do The Dip have a delightful throwback sound, they have the live performance to match it. The three horn players moved back and forth, stepping to the music. A few times the whole band danced together in unison giving the performance an old-school feel. Lead singer Tom Eddy’s vocals were spot-on and sounded just as good as their studio recordings. He spoke briefly throughout the evening, mostly to thank the audience. I feel like I say this all the time, but he genuinely seemed grateful for the turnout and support they received. I actually got the sense they were surprised by how many people were there and how into it the crowd was. Say what you want about DC, one things for certain — people know good music when they hear it.

And that’s really the best way to describe The Dip. You can call them soulful, bluesy, throwback, and so on. Really, it’s just good music. It’s the kind of music you could turn on without worry of complaint from anyone in the room. I thoroughly enjoyed The Dip’s performance and I know it was a good show when the songs are still stuck in my head days later.

The Dip recently released their second album The Dip Delivers, and they drew heavily from it on Tuesday. “Sure Don’t Miss You” seemed to be a favorite of the new album and it sounds like a tune plucked straight from Motown’s glory days. My personal favorite is “Advertising,” a straightforward song about, well, advertising. The album is solid all the way through, take a listen below and see what you think!

Stream The Dip Delivers by The Dip on Spotify:

If you’re a fan of straightup good music, you’ll love The Dip! The gents have a busy touring year, so odds are good they are performing somewhere near you. Visit the band’s website to see where they will be next and to hear more music by The Dip.