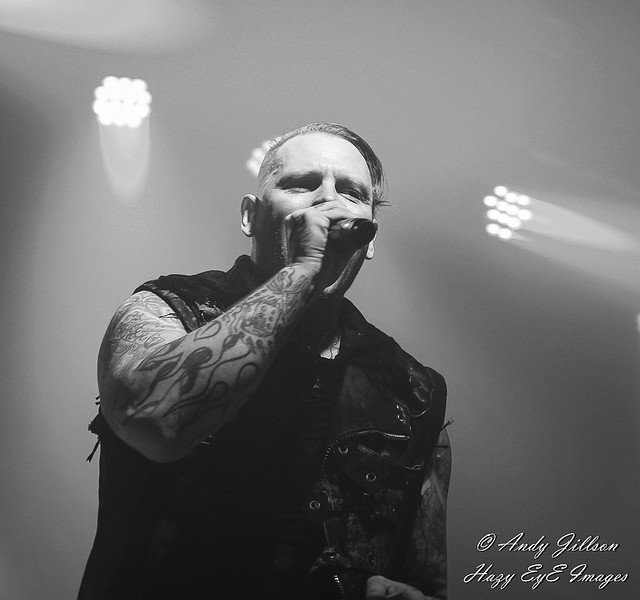 The powerful electro-industrial metal band Combichrist stopped at Baltimore Soundstage recently while on their  “One Fire World Tour,” and I was there taking photos and rocking out. Combichrist, led by Norwegian vocalist Andy LaPlegua, played an intense set of songs consisting of hard-hitting male aggro-infused industrial beats, electronic mastery, and plenty of punk rock attitude and nightmarish theatrics.

Not being familiar with their music, I was pleasantly surprised by how much I enjoyed the show and by the positive vibes and loving gratitude that was being communally expressed by the fans and band members alike on April 22.

The crowd were obviously extremely devoted fans of Combichrist and were familiar with most all the songs as evidenced by the constant dancing, singing, and yelling I was subjected to. It was actually quite nice to witness and be a part of this musical event. It felt very warm and familiar to me. I found myself headbanging and toe-tapping along with the audience for a fair amount of the songs performed.

Combichrist definitely have a sound I found similar to some of my favorite Wax Trax! Records bands of the 80’s and 90’s. Personally I would describe their sound as a mixture of KMFDM, Front 242, Revolting Cocks, Skinny Puppy, Pigface, Misfits, The Cramps, Lords of Acid, and Rammstein. That’s my honest opinion and first impression after hearing and seeing Combichrist for the first time. They are uniquely doing their own thing though, and lovers of that style of music may very well love Combichrist too.

Stream This Is Where Death Begins by Combichrist on Spotify:

Songs Combichrist played that stood out to me were “Guns at Last Dawn,” “Exit Eternity,” “Can’t Control,” “Satan’s Propaganda,” and “What The Fuck.” These were all great songs that translated well live. These same songs, and several others, seemed to stand out to their fans as well. Most of the audience were pressed firmly against the metal barricade while they raged to the music. Combichrist are scheduled to release One Fire, the band’s ninth studio album, on June 7 via Out Of Line Music.

It was a small, but seriously devoted and passionate group of concert goers in attendance. The members of Combichrist all performed extremely well and looked like they had a blast playing at Baltimore Soundstage.

Here are some photos of Combichrist performing at Baltimore Soundstage on April 22, 2019. All images copyright and courtesy of Andy Jillson.