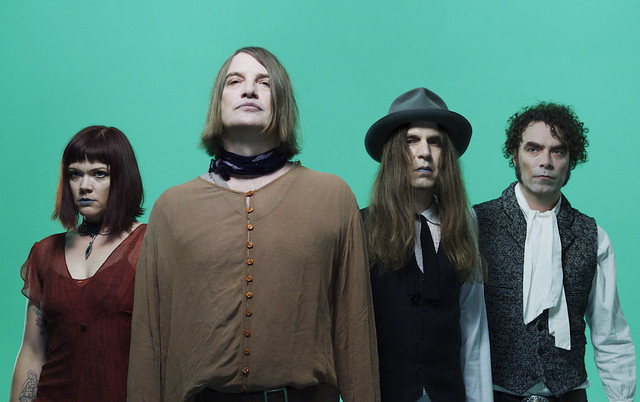 Celebrating 25 years of making gritty and glittery music, the veteran Portland four-piece Dandy Warhols performs at the 9:30 Club on Monday, May 6.

“The weirdest thing about it being ‎our 25th anniversary is it doesn’t feel like 25 years. Feels like about six. Or five,” mused frontman Courtney Taylor-Taylor in a press release, while keyboardist/bassist Zia McCabe said, “Get ready for a massive concussion of rock and roll that’s been a quarter of a century in the making.”

Their recently released 10th studio album, Why You So Crazy, signals a return “in singularly freewheeling fashion, careening through classically off-kilter psych-pop, country-fried Americana, and gothic piano-propelled rumbas. Packing in references as far flung as Fred Astaire and Ginger Rogers, Don MacLean’s ‘Chevy,’ and the church of Bowie’s ‘Modern Love,’ the 12 songs reflect the band’s surrealist visions of an alternate reality,” explained a press release.

Watch the official music video for “Be Alright” by The Dandy Warhols on YouTube:

The tracks on Why You So Crazy have been called “dementedly delightful modern psych classics…enough to make you hope the entire planet isn’t controlled by the dark forces of greed and banality” by Flood, while NPR praised the album as “a real return to form… lots of great turns and surprises.” Said Billboard, “With a robotic, futuristic sound added into their traditional mix of stoned rock soul, the band hypnotizes, washes away your transgressions and just flat out get down.”

The Dandy Warhols are moving into the next chapter of their self-described “25-year act of sonic rebellion.” Said Courtney, “We’ve always been driven to create art with emotional clarity. That’s what the world needs more than ever right now. I’ve never felt so strongly that people are losing their minds…. It doesn’t feel like a natural progression of insanity, it just happened. Most people are behaving in a manner that can only be described as batshit crazy.”