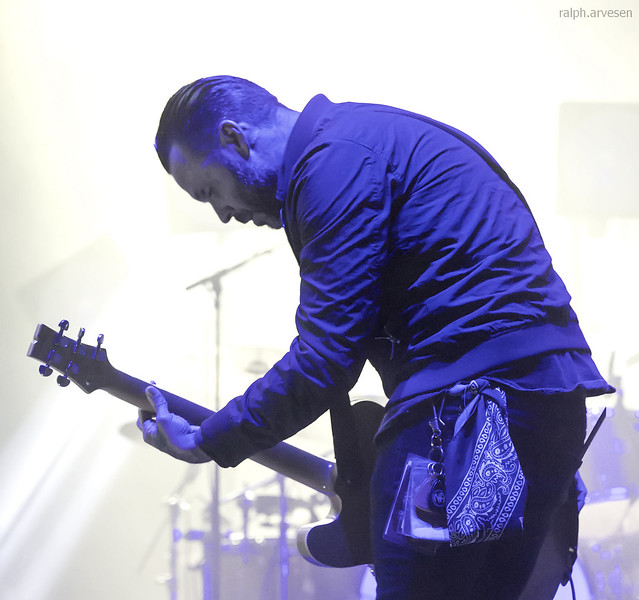 I recently had the privilege of going to see one of the great bands of the aughts at 9:30 Club — Blue October. This was a band I listened to in high school and got back into recently. And Blue October is now on tour promoting their most recent album — I Hope You’re Happy.

If you’re unfamiliar with the name of the band, take a listen to “Hate Me” or “Into the Ocean” and I’d be willing to bet you’ll know the songs. While those are arguably Blue October’s most well-known singles, they do not represent who the band is today.

Don’t get me wrong — those are good songs, and the band did not shy away from playing them at 9:30 Club on April 25, but the band as a whole — and more specifically lead singer Justin Furstenfeld — has gone through a transformation in the past decade. Justin spoke about this after they played “Into the Ocean” talking about how 10 years ago, he wrote that song about jumping off a ship and how he’s come so far since then. Justin then proceeded to tell a heartwarming story about his wife and his kid, a simple moment he had with them recently that so clearly meant the world to him. He concluded the story by telling the audience how he was blessed.

You could feel the emotion in the room and the collective appreciation for the journey Justin has been through. Justin also began one of their new songs “How to Dance in Time,” a song about his wife Sarah, by yelling her name and proceeding to gesture to his heart throughout the performance. I mean, how often to you see the frontman of a rock group talking and singing about his wife in such a loving way? It was a great example of how Blue October creates and performs with real and raw human emotion.

Stream I Hope You’re Happy by Blue October on Spotify:

Justin performed a stripped down acoustic version of “Hate Me,” which the crowd loved. It was awesome to see a slightly different take on the band’s hit song. This was a smash hit that went platinum, so some might say it’s fine as-is, but when you’ve played a song hundreds of times, it’s understandable that there is an evolution and sometimes it’s time to mix it up. If artists cannot connect to songs emotionally, music loses its purpose.

Throughout the show, Justin told the audience how he loved them and appreciated them. It was easy to see how much his fans’ support has meant to him over the years. They appreciated what he’s been through and loved the band despite their changes. Not only did this speak to the loyalty and support of the fans, but it spoke to Blue October’s song-writing and music-making abilities. I have seen bands change and water down their music as they get older and continue trying to produce hits. While Blue October’s music has changed into a more positive style, the sincerity and emotion in it hasn’t gone away.

Thursday night’s concert was one of the most emotional concerts I have ever attended, and I did not want it to end. Oftentimes when a concert ends, even if I’ve enjoyed it, I am ready to get going home, but not this time. I could’ve stood there and listened to another whole set. While my unspoken desire to hear more music did not result in the band deciding to play us another 10 songs, the night wasn’t over yet. Upon standing in line to buy a t-shirt, we noticed that Justin would be signing autographs for anyone who bought merchandise. How cool is that!? No VIP experience or backstage passes needed, just buy a shirt and you can meet him. Naturally, we stayed to have him sign our stuff along with bassist Matt Noveskey.

We didn’t have a lot of time to talk but Justin was very warm and friendly, and we all appreciated the chance to meet him. I will certainly be waiting for Blue October to come back to the area. While the band is getting a bit older, it seems pretty clear they aren’t ready to stop making music and I can’t wait to see what type of album they put out next. Keep up with Blue October yourself by following their website.