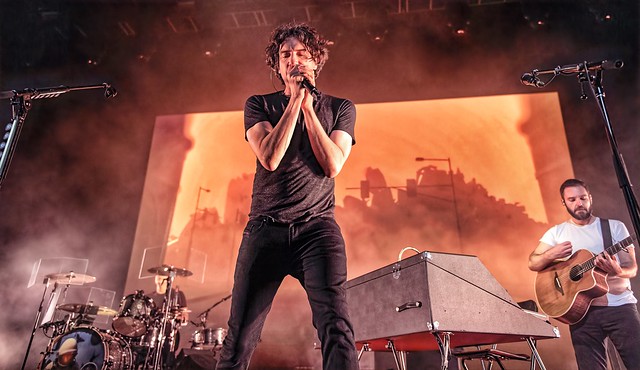 
In 2011, Snow Patrol released their sixth LP, Fallen Empires, but as frontman Gary Lightbody has mentioned in interviews, a combination of writer’s block and struggles with sobriety delayed the release of last year’s return, Wildness. But this time away seemed to have invigorated the band, giving fans another dose of the big sweeping anthems we love.

After missing them during their last tour, I was more than thrilled to see they were coming back to DC and headlining at The Anthem on April 26.  And to a crowded club, Gary, Nathan Connolly on guitar, Paul Wilson on bass, Johnny McDaid on keys and guitar, and Jonny Quinn on drums started heavy and kept the momentum throughout the evening.

As the lights went down and a huge snowflake was projected behind the stage, Snow Patrol took the stage and immediately launched into “Take Back the City,” a song about Belfast, Northern Ireland. As Gary took the mic and sang out to the crowd, the audience loved it!

As a band that has been producing music for now 25 years, Snow Patrol looked like a band perhaps half that age. Watching the band members smiling and playing to the crowd, it gave you a good feeling just watching this band perform. Taking a pause between songs, Gary introduced the lead track to their most recent album, Wildness, by saying, “this is a song that took five years to write and five minutes to play,” before performing “Life on Earth” with visuals of a satellite coursing over the planet projected on the massive screen.

It was heartwarming to hear the audience take over singing on songs like “Run” and the “Chasing Cars.” And one of the most astonishing projected visuals was for “The Lightning Strike” as stars exploded across the backdrop. It was a brilliant return for a band that I’m hoping will return again very soon!

Here are some more photos of Snow Patrol performing at The Anthem on April 26, 2019. All photos copyright and courtesy of David LaMason.