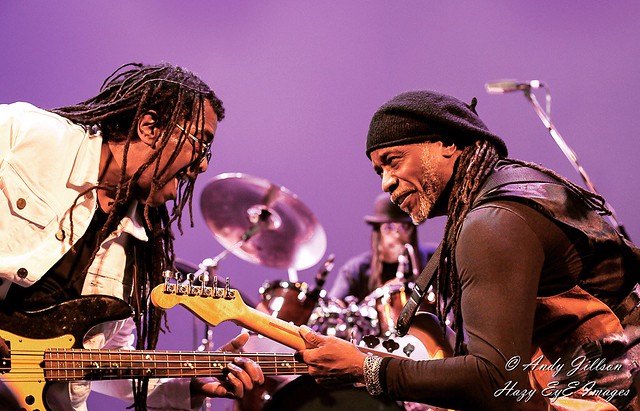 Death performs at the Howard Theatre on April 25, 2019. (Photo by Andy Jillson)

The legendary proto-punk rock band Death stopped at the Howard Theatre in DC recently, and I cleared my calendar to catch these revolutionary rockers in action.

Also known as Detroit, Michigan’s “DEATH FROM DETROIT,” this band of three brothers played a flawless set at the Howard Theatre on April 25. The setlist consisted of a mixture of their raw mid-’70s classics and also a few songs off their most recent studio album N.E.W. (which was released in April 2015). They were great in the ’70s, and it was great seeing them for myself in the present.

Against all odds, these groundbreaking musicians are out on their Final Curtain 10th Anniversary Tour. Death graciously took the stage and played a dream set for a large crowd of anxious fans. The band were in DC celebrating the 10th anniversary of the release of their album …For the Whole World to See, which was released on Drag City Records in 2009 and unleashed Death songs recorded during their 1975 demo sessions.

Stream …For the Whole World to See by Death on Spotify:

Death were well-rehearsed and appeared to be having a blast playing these songs for their fans in DC. The band sounded to me like an innovative blend of garage, funk, punk, and hard-hitting classic rock. Having never seen Death perform live, they made it abundantly clear to me that they are “the real deal.” They never sold out and never gave in to the music industry’s demands. They are uncompromising, and it has suited them well. Death plainly demonstrated what years of hard work, honesty, and unwavering dedication has done for them.

Fans of Death in attendance demonstrated their love and appreciation of the music and positive vibes. The crowd went crazy when the band played their classic “Politicians in My Eyes” toward the end of the set. It was a great ending to an even greater musical celebration.

Here are some photos of Death performing at the Howard Theatre in DC on April 25, 2019. All images copyright and courtesy of Andy Jillson.