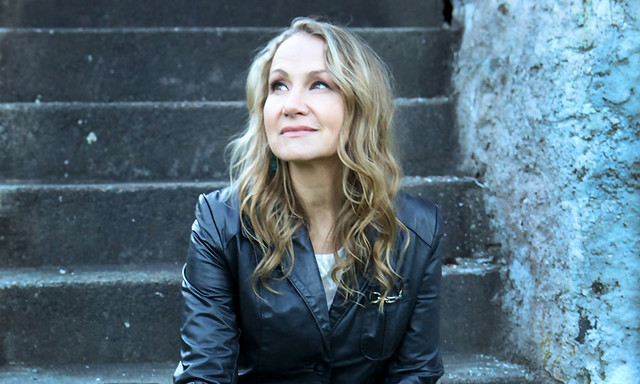 In 1995, Joan Osborne’s hit song “One of Us” was inescapable. Joan’s powerful vocals imprinted on teenagers like me, and I can see still her face from the music video on MTV rotation. That face appeared again to pay homage to Bob Dylan at City Winery recently.

While the hit song represented a popular breakthrough for Joan, it came on her second album (albeit her major label debut). Joan had put in many years in the clubs of New York City, and she was already into her 30s. In the past 25 years, she’s found a comfortable groove using her vocal gifts for original material and as an interpreter. Her work as an interpreter has earned glowing critical praise, with 2012’s Bring It On Home, a blues collection, nominated for a Grammy.

On Saturday night, Joan brought her Songs of Bob Dylan Tour to City Winery. In 2017, Joan released the album Songs of Bob Dylan; two of the producers, Keith Cotton and Jack Petruzzelli, accompanied her for the DC concert tour. Keith played the piano and keyboard, and Jack played acoustic and electric guitar. Joan herself provided various forms of percussion on some songs — the tambourine, a small drum — played acoustic guitar on a few, and just sang on others.

Joan began her set with “Quinn the Eskimo (The Mighty Quinn).” As she sang, it struck me that, with lines like “You’ll not see nothing like the mighty Quinn,” Dylan had composed a song in the tradition of old folk-hero ballads. Dylan’s lyricism, his turn of phrase, takes this old genre and raises it to a new artistic level. The arrangement used Saturday night, with Keith on the piano and Jack on the acoustic guitar, really brought out the lineage of the song. I’d certainly heard it, but I’d not connected Dylan’s lyrics to the proper tradition before.

For “Highway 61 Revisited,” Keith switched from the piano to the keys. The interplay between the keys and the guitar created an apocalyptic feeling perfectly suited to the song, with its biblical timbre and lines like “kill me a son.” Against the driving, eerie instrumental accompaniment, Joan’s delivery of the lyrics sent a chill down my spine.

Joan emphasized the size and quality of quality of Dylan’s catalog. She told the audience that she and her band had learned several songs that they didn’t record. While most of the evening’s songs, including the preceding, as well as “Spanish Harlem Incident,” appeared on the album, Joan also included two live-only Dylan numbers in the show: “Don’t Think Twice, It’s Alright,” and “Gotta Serve Somebody.”

One of Joan’s favorite songwriters, Lucinda Williams, does a fantastic cover of “Tryin’ to Get Heaven to Heaven.” Lucinda also covered the next song, “Masters of War,” in concert with Charles Lloyd and the Marvels at the Library of Congress last December. Joan said it’s a testament to the power of Dylan’s writing, and to the strangeness of the times we live in, that a song like “Masters of War,” written more than 50 years ago, seems like it could’ve been written only yesterday. With the continuing expansion of private defense contracting, the song’s condemnation of war profiteering sadly only becomes more biting.

In addition to writing incredible political songs like “Masters of War,” Dylan has also written heart-stopping love songs like “Buckets of Rain.” “Tangled Up in Blue,” followed appropriately, burying a love song in a song about endless travels. This led to a respite from the Dylan songs, as Jack picked up his electric guitar, and Joan sang Muddy Waters’s “I Wanna Be Loved,” which she recorded on Bring It on Home. Joan played an original song she’ll be recording for new album, “Take It,” and covered Brit singer-songwriter’s Wreckless Eric’s “Whole Wide World,” before closing her closing out her set with “Gotta Serve Somebody.”

A standing ovation brought Joan, Jack, and Keith back to the stage. For her encore, Joan went with two songs from 1995’s career-making Relish. Joan co-wrote “Spider Web,” while Eric Brazilian penned the megahit “One of Us.”

About a year ago, I attended another show that consisted of Dylan covers: Bettye LaVette’s concert at the Hamilton. It’s a testament to Dylan’s catalog that Betty and Joan both released such critically acclaimed records, and both had excellent tours, while covering none of the same songs. They each had very different takes on Dylan and brought out different aspects of the songs. Joan’s musical arrangements (at least on Saturday) largely fell in the rock category, while Bettye went with an R&B style and tinkered more with the lyrics.

Dylan’s songs have the same quality as Shakespeare’s plays: open to interpretation, musicians can present them in an endless variety of presentations. Just as Joss Whedon’s film version of Much Ado About Nothing used contemporary costuming and gesture to provide insight into that classic work, the different ways that musicians present Dylan’s songs allow the audience to gain a new appreciation for the brilliance of his lyrics.

I left Saturday’s concert with a few major insights. I understand “Quinn the Eskimo” as a folk hero song now. I really felt the darkness of “Highway 61 Revisited,” and I see what “Tangled Up in Blue” owes to Homer’s Odyssey. I hope that a concert will provide me with beauty and meaning, and this concert absolutely succeeded in that. I heartily recommend this show to fellow music lovers.