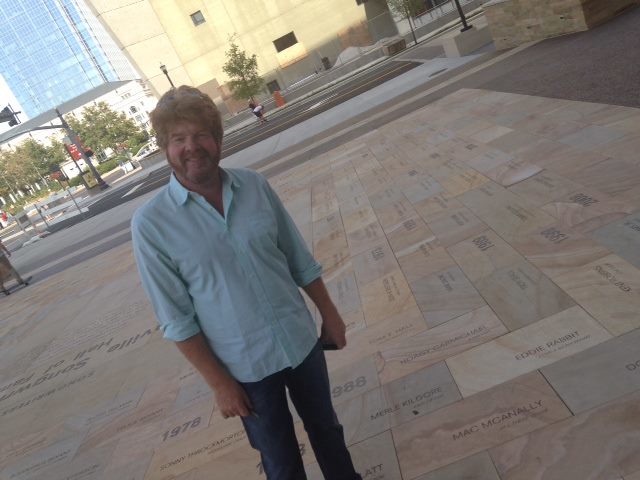 You may not have heard Mac McAnally’s name, but you’re likely familiar with his with work. If you’ve listened to Jimmy Buffett, you’ve probably heard Mac’s songs, and you’ve definitely heard Mac; he’s played for decades in Jimmy’s Coral Reefer Band. Mac played a great solo show at The Birchmere on Friday.

For all the success of his songs and the critical acclaim he’s received, Mac maintains a certain down-home, small-town humility and a wonderful sense of humor. Mac radiated warmth and charm at The Birchmere on May 10. A natural storyteller, he surrounded his songs with bold, colorful details, with turns of phrase that added an extra dimension. Mac’s show was intimate and engaging, and he left the audience buzzing with praise on the way out. This was a master class in how to perform at a venue like The Birchmere.

Coming out to applause, Mac broke the ice with humor. “I’m very envious of whoever you guys have mistaken me for,” he joked. Mac told the audience about his hometown of Belmont, Mississippi, a town of 900, which he described as having “one wild girl, one traffic light, and one yellow page.” The traffic light, he said, “has been going 20 years, and they don’t make yellow pages anymore, but the wild girl is still going.” In his small town, he told the audience, people blame all the ills of the world on the big city, the big city is New Orleans.

At the age of 19, Mac met Jimmy Buffett, and Jimmy took him to NOLA for the first time. Mac and Jimmy “listened to music and ate about four or five meals a day.” Mac discovered that a lot of the small-town prejudices he’d grown up with about NOLA were simply wrong, and he wrote “Blame It on New Orleans” as an apology to the city. Playing bouncy Dixieland piano, he sings of the good things that New Orleans can be blamed for: Mardi Gras, the Preservation Hall Jazz Band, and Cafe du Monde, among others. Mac also explained that he has a bit of superstition about opening his set with this song.

Mac’s mother was a gospel piano player, and she made him take piano lessons. She also taught music lessons, but “never took a dime” for them. She felt that the piano “adds a cultural content that is otherwise clearly lacking” in his show. During “The Opposite of Love,” a multi-colored disco-ball flashed during the “Over the Rainbow” intro segment. Mac commented that his favorite song vacillates between these first two.

Mac got a record deal at 19. He went to Los Angeles to record, and it was his first time on a plane. When his record came out, he got a lot of really good reviews in prestigious publications. But, he said, “we write songs to impress somebody, and initially, I was failing miserably.” He couldn’t get anything going back in Belmont, until three years later, when he got a write-up in Progressive Farmer for his song “Cafe on the Corner.”

Mac’s father taught school, but he came from a family of displaced fathers. “We’ve been looking at everything in an economic way the last three or four generations,” Mac said, and he suggested that this just isn’t the way to look at farming. Farming, he argued is a noble calling, and it’s value can’t be measured purely in dollars and sense. He sings about this in “Cafe on the Corner.”

Stream Live in Muscle Shoals by Mac McAnally on Spotify:

Jimmy Buffett and Mac co-wrote “When the Coast in Clear” at the end of a trip together to NOLA. Mac was getting ready to leave, and he’d been avoiding writing. He had a few hours, though, and he wasn’t hungry “because I’d already eaten everything in Louisiana.” Mac and Jimmy discovered that they both like to go down to the saltwater at the end of tourist season, and that was the genesis of the song. Mid-set, Mac played another co-write with Jimmy, “Changing Channels.”

Mac wrote the #1 hit “All These Years” for Sawyer Brown. He told the audience, “I don’t write a lot of cheating songs because that’s a competitive field in Nashville.” He said that Nashville songwriters will get up in the morning, go to work, write a cheating song, have a few beers at at lunch, and write a drinking song in the afternoon. Mac said that he’s never been able schedule himself like a songwriter. He was just very lucky, he that one night, he was up late playing a A minor chord, and “All These Years” fell out. The song is unusual for exploring the perspectives of both characters in the relationship.

Pointing to the unusual looking stringed instrument on the stage, Mac explained it that was an octave mandolin. He told that audience that songs just fall out of songwriters until about the age of 35; after that, he said, you have squeeze. Mac described an unusual technique he has for squeezing out the songs: he likes to drive with his knees, so that he can play mandolin and compose. While the audience laughed, Mac emphasized that this is objectively quite dangerous and terrifying.

Sawyer Brown needed another song from Mac one time, so they handed him the mandolin and the keys, and off he went. It worked. Mac wrote a chorus and verse. He came back to the studio and finished composing “This Time,” which Sawyer Brown rode to #2.

Once Mac asked Waylon Jennings if he’d ever done anything like driving around and playing the mandolin. Waylon said that he and George Jones used to load up a car with guitars and alcohol and drive west. If they needed four songs, they would turn around after they’d finished two.

Kenny Chesney has an album out, Songs for the Saints, with all the proceeds from going hurricane relief in the Virgin Islands. He invited Mac to sing a duet with him. Mac chose to cover Jimmy Buffet’s topical “Trying to Reason with Hurricane Season.”

In 2008, Mac had his ninth chart appearance as a guest vocalist when Kenny went to #1 with his “Down the Road.” Kenny called Mac up and said, “We’re going to cut one of your songs. I don’t care which one.” When Mac got to the studio, Kenny asked which song he wanted to do, and assured him that he knew a lot of his songs. With typical humor, Mac joked that he know a lot of his own songs, too. He turned the question back on Kenny. Kenny relented and said that, while he didn’t have any children, if he did, he’d want to say to them what Mac said to his kids in “Down.”

Mac had charted, but only reached #70, 18 years earlier, with his original recording of the song. He wrote it in the early morning hours of Christmas 1987, after staying up all night working on a gift for one of his children that had been advertised as “no assembly required.” At about 3am, he discovered that he needed D batteries, and had to go out to get them. When he got back home, he had an hour and a half before daylight, so he wrote a song to his daughters. While he got a Grammy nomination in addition to the #1 hit, he said the best thing about the song is the still feeling he had that Christmas morning with his family.

Mac played a medley of three songs he’d major with hits for other artists: “Old Flame” for Alabama; “Two Dozen Roses” for Shenandoah; and “Thank God for You” for Sawyer Brown.” He threw in the wacky “Junk Cars,” about what he explained as the Southern custom of keeping junkers on the lawn, which NASCAR put on their first album. A cover of “Heard It Through the Grapevine” came as a pleasant surprise, and “Back Where I Come From” saluted his hometown.

Two songs really captured Mac’s positivity. Settling in at the piano, he dedicated “On Account of You” to the people who made his life better, and spoke about how he views life as a continual striving for improvement. He invited the audience to think about the people who make our lives even a little bit better.

Mac wrote “It’s My Job” before he broke into the music business. At the time, he was really just a kid, working a job that sucked on the highway. His first day, he said, he made the mistake of wearing tennis shoes, and they melted right in the liquified asphalt. It was, he acknowledged, a terrible job, and he hated it. But the lesson, he is, that “it’s important to do your best, because that’s the shortest path to a job that sucks less.”

With that, Mac closed his set and received a standing ovation. He came back to the stage for an encore, playing Jimmy Buffett’s “A Pirate Looks at Forty.” After he finished, the audience rose once again, giving him a completely deserved second ovation. Any music lover will thoroughly appreciate Mac McAnally, and any aspiring musician can learn a great deal from watching him perform.