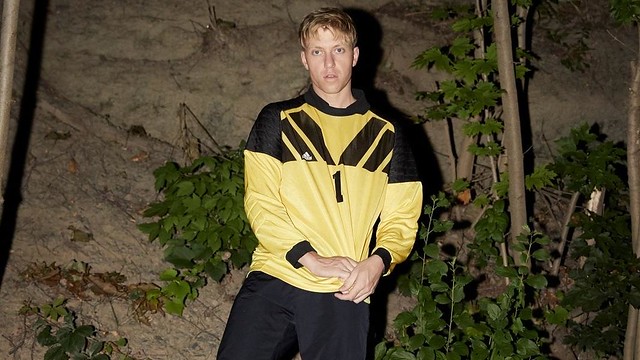 Jonny Pierce of The Drums (Photo by Nicholas Moore)

Indie crooner Jonny Pierce led The Drums to a performance high with his irresistible new wave hooks at Black Cat recently. The resulting concert was so damn good that the audience was struck giddy to witness it.

Promoting a new album, Brutalism, released earlier this year via Anti- Records, The Drums synthesized all of the right elements into one very satisfying show. Jonny danced and sang, rollicking from one side of the stage to another, while the band rolled along with smartly crafted surf pop, setting a foundation of New Order-inspired synths and covering it with a splash of guitar seemingly inspired by California surf punk.

All the while, Jonny was very much in his element. Sharply clad in a black outfit with red racing stripes, he appeared ready to take on the world. At the very least, he took on Black Cat, delivering a sharp act that kept the very full Black Cat dancing for the entire evening.

You might have thought The Drums hit a low after their third record, Encyclopedia, brought them to smaller stages, in our case at DC9, in 2015. (Editor: We are reminded this was a promotional show, but geez small stage for a big name.) Then The Drums’ fourth album, Abysmal Thoughts, turned out to be a Jonny Pierce solo project after the departure of the band’s Jacob Graham. But the apparent musical reinvigoration of Mr. Pierce continues adroitly on Brutalism, which lent five tracks to the terrific 17-song set on May 11.

Stream Brutalism by The Drums on Spotify:

Honestly, the audience, ourselves included, loved everything they heard as Jonny covered ground from all five albums by The Drums, going back to the band’s self-titled debut album for three numbers, most notably the addictive “Let’s Go Surfing.” The band performed four numbers from its excellent 2011 sophomore record Portamento, including crowd-pleaser “Money,” which serves as a great showcase for Jonny’s distinctive voice. The Drums pulled only one song from 2013’s Encyclopedia, presenting the admittedly very catchy “I Can’t Pretend” from the last of the Jonny Pierce/Jacob Graham collaborations.

Another four songs from the show flowed from Abysmal Thoughts, including the encore numbers “Rich Kids” and “Blood Under My Belt.” The latter declaration of growth and independence made for a fitting end note in an altogether entertaining concert.

The Drums continue on tour tonight, May 15, in Atlanta, and remain on the road through May 23 in Austin. More West Coast and Southwest dates are on the schedule for the summer, so keep your ears open for The Drums near you! You will love this show, particularly if you are a fan of melodies that could have sprung from new wave acts in Manchester in the mid-’80s coupled with chords that would have played well with ’70s California surf rockers. Beyond that, Jonny makes for an appealing and watchable frontman. It’s a winning combination of elements.