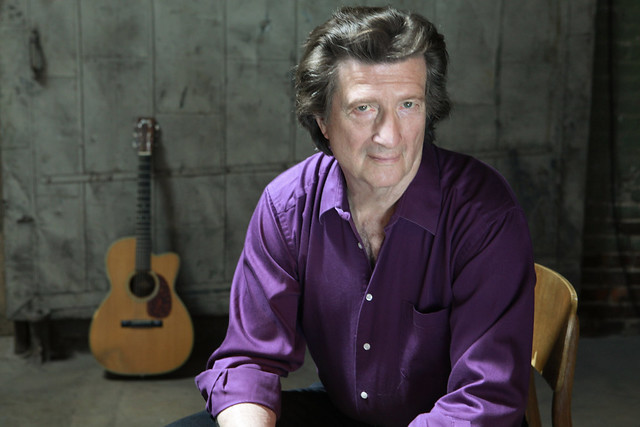 Singer-songwriter Chris Smither performs at The Hamilton Live on Friday, May 17. Chris released Call Me Lucky, his latest record, last year via Signature Sounds/Mighty Albert with distribution by Redeye. Recorded at Blue Rock Studio in the Texas foothills and packed with Smither trademark songs that offer commentary on the human condition with a wink of an eye, the album pulls from deep in the soul and a couple of surprise covers that remind us of Chris’ deftness as a song interpreter as he makes the songs his own.

Prior to his DC concert, Chris took a phone call from Parklife DC’s Mark Engleson, who asked him about his relationship with New Orleans and the blues, meeting your heroes, and his advice for the younger generation. [This interview has been edited for length and clarity.]

Mark Engleson: I understand your parents were academics?

ME: What field were they in?

ME: Did you pick up languages yourself?

CS: Yes, I did. You weren’t allowed to grow up speaking only English. [Laughs]

ME: What languages do you speak?

CS: French and Spanish. Mandarin, too.

ME: I imagine French was useful in New Orleans.

CS: Not particularly. Everybody wonders that. I learned it going to school in Paris.

ME: How much of your life growing up did you spend in Paris?

ME: But mostly you grew up in New Orleans, right?

ME: New Orleans has a very unique culture, especially when it comes to music. How do you feel that it influenced you and your musical style?

CS: It’s undoubtedly there. Other people recognize it. I don’t recognize it so much. But to tell you the truth, when I was living in New Orleans, I was totally immersed in trying to learn country blues stuff, and everybody thought that was very quaint. Why didn’t I get an electric guitar? Why was I into all this old music? People ask me why I left New Orleans and wound up in the Northeast, and I say, “For the music.” [Laughs]

ME: I read that you went up to Boston, you were looking for a different scene. Was that a big adjustment, going up to Boston?

CS: Not really, because it’s an academic-oriented city, and I grew up on a university campus.

ME: I know Tulane…, well, the whole the city got hit hard by Katrina, but I’ve heard that it’s just not the same.

CS: I think so, yeah. It’s given them kind of renewed purpose. It was a devastating storm, of course. They’ve come through with flying colors. They’re kind of in a nice position now.

ME: I just remembered that a certain number of faculty got poached because the university was, like everything else in the city, shut down for an extended period of time.

ME: Are you based in New Orleans now?

CS: I live in Western Massachusetts.

ME: I assume it affected you somewhat emotionally but not directly, then.

CS: That’s right, because none of my people were there.

Watch Chris Smither play “The Blame’s on Me,” “By the Numbers,” and “Everything on Top” from his latest album in a session for Acoustic Guitar Magazine:

ME: How do you conceive of the relationship between blues and folk music?

CS: Well, it’s a form. That’s a difficult question. The kind of blues that I was listening to.. it was folk music of a particular kind that eventually developed into rock ’n roll. When I was first doing it, I didn’t distinguish between them except that one was predominantly Black, very African-influenced; the other kind of folk music was predominantly White, northern European. Folk music in America developed largely from Irish, Scottish, and English music. And then, of course, country music formed when it met Black music.

ME: And then one of the wild things that people don’t even think about is that the steel guitars are Hawaiian.

CS: Well, it was adopted by Polynesians. It’s quite funny, the fact that Hawaiian music is played on a guitar at all. [Laughs] Western influence did that.

ME: You’re worked with some very interesting people, like Dr. John. Could share some impressions and memories of him? Because he is a character.

CS: He is a character. I had a great time with him. The only time that I interacted with him professionally was on my third album. And there were a bunch of people on that record that I was very impressed by. Lowell George, for example.

ME: Yeah, from Little Feat…

CS: They would come in and dominate the whole scene without seeming particular obvious about it. But I don’t think I could give you too many details.

ME: I’d just heard that he has a very pronounced way of speech. I was reading a book by this session guitarist and sideman, who said that when he played with Dr. John, he said, whatever makes you “com-for-ta-bla.”

CS: I was talking to him, one time, I ran into him at the airport, he didn’t forget me after that session. He said, “Hey man, how you doin’?” and held up one finger. He finishes his telephone conversation and looks at me and says, “That was my daughter. She is doing a history of New Orleans. She wanted to ask me all the questions about what it was like playing for the strippers in Orleans.” I said, “What’d you tell her?” “I told her it was mostly ho-hum, you know. Mostly pretty ho-hum. But every once in a while… you remember Splash McKenzie?” I said, “I can’t say I do.” “You got to remember her at the Boom Boom Room. She used to take her clothes in off in a big tank while sucking on an air hose, or something of the like that was more interesting.”

ME: [Laughs.] Oh god, that is funny. The interesting thing about New Orleans accents is that I find it’s one the one place in America where White and Black accents seem to merge the most.

CS: Absolutely, you’re right. The predominant accent is actually created by a huge influx of Irish from Brooklyn.

CS: Yeah, Irish laborers came down to dig the canals. For somebody in Brooklyn, the word B-I-R-D, the Brooklynites say “boyd,” instead of “bird.” It’s a distinction, but the origin is very clear. But they’ll say “boyrd.”

CS: It’s a big city accent. It’s not really so much Southern. It’s unique to the South.

ME: Bonnie Raitt has been very complimentary of you. She once referred to you as “my Dylan.”

CS: “My Eric Clapton” is what she actually said.

ME: Oh, okay. Things get misquoted. Can you talk a little about your relationship with her?

CS: She’s just been a really good friend before either one of us ever made it in records. She lived around the corner from me in Cambridge for years. I knew her for about three years before I knew that she played the guitar. And when I finally found out that she played, and not only played but played well. My jaw dropped. I didn’t expect it. I should have known, because she was hanging around with Dick Waterman, who was managing all these old blues guys.

ME: Did you get to see a number of the old blues guys back in the day?

CS: Oh, I sat around and played with them in living rooms.

ME: Is there anyone you missed out on you have regrets about?

CS: That I didn’t see live, you mean?

ME: And he would’ve still been alive–

ME: I’ve heard Steve Earle talk about seeing him in Houston.

CS: My friend Townes Van Zandt used to talk about him at times.

ME: Townes had that quote, “There’s the blues and there’s zippity-doo-da.”

ME: When did you meet Townes?

CS: I met Townes early after I signed with Poppy Records. The reason I went to Poppy is because they had Townes Van Zandt. I figured if they liked Townes, they’d like me.

ME: So while country has never been your wheelhouse, you have a respect for it?

ME: Did you know any of his running buddies?

CS: I did. Who’re you thinking of?

ME: Blaze Foley — did you ever meet him?

CS: I did, I did. But only briefly once.

ME: I was just curious. He’s become sort of a big figure with the movie that came out about him last year. Who do you think are some of the more talented or interesting acoustic blues players on the scene at the moment?

CS: I have a hard time with that, because I started playing blues, and it’s not really what I do anymore. I’m basically just an acoustic singer-songwriter.

ME: Are you more attentive to songwriting these days?

CS: I’m more attentive to my own songwriting. [Laughs] I was just talking to a friend of mine, Peter Mulvey. Have you ever heard Peter Mulvey?

ME: I’m going to take down the name.

CS: He’s a wonderful songwriter. There’s a community of people who write in the Connecticut River Valley.

Stream Call Me Lucky, the latest album by Chris Smither, on Spotify:

ME: Do you have a regular routine you use?

CS: Yeah, I do. Having said that, I don’t write a whole lot, except when I’m getting ready to make a record. I think to myself, “Time to make a new record,” and I write the songs. That’s not entirely true, but in between I work on the guitar. I write nine or 10 songs, add a couple of covers, and I’ve made a record.

ME: Do you have any sage advice for young folks coming into the music game?

CS: Yeah. Don’t lose sight of the fact that it’s supposed to be fun. If you’re serious about it, don’t learn how to do anything else. If you learn how to do something else, you’ll go do that. It’s a business that rewards longevity. That’s hard advice to tell young people, but it’s a job like any other job. If you’re any good, the payoffs become better as you go along. I’m not talking about pop stardom.

ME: Well, Chris, it has been a pleasure speaking with you. You have a nice day.

CS: Thanks, you too.

Catch Chris Smither in concert at The Hamilton!
Buy your tickets online.