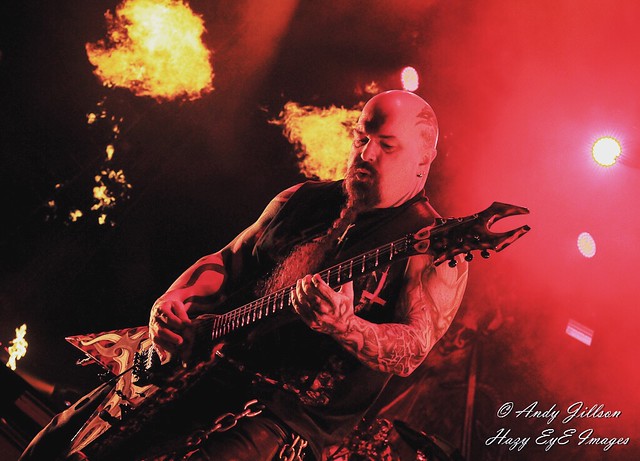 Slayer performs at Merriweather Post Pavilion on May 14, 2019. (Photo by Andy Jillson)

The almighty fast, aggressive, and nightmarish Slayer rained blood and fire during their recent performance at Merriweather Post Pavilion. The divine “Big Four” thrash metal gods fucking pummeled the audience with some of the most intense and moving music known to man.

Likewise, Slayer’s stage set and pyrotechnics were fucking amazing! Fuck KISS! Seriously. Slayer just “bitch-slapped” KISS and just about every other artist out there that thought their concerts were the best in the business. Hahahahahahaha!!!

Covering their entire career, Slayer played a killer set of classic material covering the ’80s, ’90s, and some of their more recent material as well. The feeling of being in the photo pit for this particular show was quite surreal. Slayer is a band I’ve admired since I was an angry, confused, and twisted teenager. Now I admire them in a much different way (though I’m still twisted).

Slayer dedicated about a quarter of the show to Seasons in the Abyss, the band’s widely hailed fifth studio album, loading the last half of their set with “Temptation,” “Born of Fire,” and the title track, among others.

Stream Seasons in the Abyss by Slayer on Spotify:

The hair stood up on my arms and on the back of my neck during the performance of certain songs. I attempted to be as mindful as possible and really enjoy the moment, which I did despite having my face melted by insanely loud shredding thrash metal guitar, drums, and vocals. I could literally feel my eardrums vibrating and buzzing. I could plainly feel the heat from the flames on my face as Slayer slayed their instruments to the frenzied crowd’s delight. The stage set was like a scene straight out of Hell. And I loved every fucking second of it! This was a musical spectacle and celebration unlike any I have ever witnessed.

This is going to be Slayer’s last go around from what I understand. If you’re not an idiot, you’ll buy yourself and all your favorite friends and family tickets to see Slayer while you still have a chance. I mean who wouldn’t want to have their face melted off in Hell with Slayer?!? Anyway, this shit will blow your mind. The “Final World Tour” is the ongoing “final concert tour” by these America metal music giants, and you best not miss it when it stops near your city.

Here are some photos of Slayer performing at Merriweather Post Pavilion in Columbia, MD on May 14, 2019. All images copyright and courtesy of Andy Jillson.