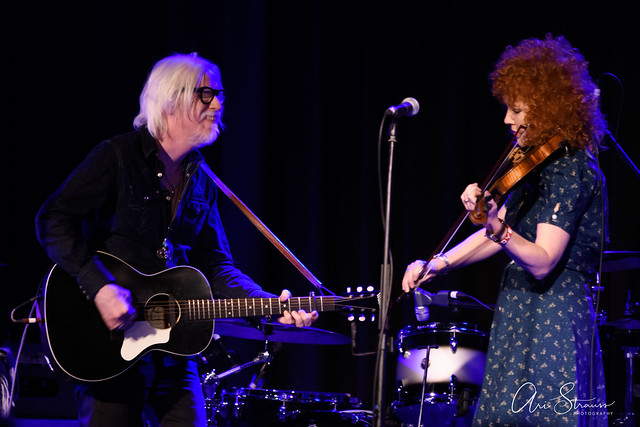 The Mastersons perform at The Birchmere on May 20, 2019. (Photo by Ari Strauss)

Married couple Chris Masterson and Eleanor Whitmore have performed, respectively, as the guitarist and the fiddler in Steve Earle’s band, The Dukes since 2010. They also record and perform as an acoustic duo, The Mastersons. They played new material at The Birchmere recently as openers for Steve.

The Mastersons have released three albums: Birds Fly South (2012), Good Luck Charm (2014), and Transient Lullaby (2017). When Steve tours with The Dukes, The Mastersons usually open his shows as they did on Monday, May 20. The duo plans to record a new album after they finish this tour with Steve.

Both Chris and Eleanor are native Texans. Chris is from Houston, while Eleanor hails from Denton, a college town north of Dallas that can claim, among others, Norah Jones, Meatloaf, and Roy Orbison as its own. Before joining The Dukes, Chris played guitar on the Son Volt album American Central Dust, released in 2009. He also played with Jack Ingram. Eleanor toured and recorded with Regina Spektor, Kelly Willis, and Bruce Robison. Eleanor comes from a musical family; her sister, Bonnie, a fixture in the Austin music scene, opened James McMurtry’s show at The Birchmere a few months ago.

The Mastersons opened with one of their older songs before moving to new material. Their new song, “Eyes Open Wide,” is about not sticking your head in the sand and facing reality, especially in these troubling times when we might want to turn away. Eleanor traded her guitar for her fiddle on the next song, and Chris took over on lead vocals.

Chris asked the audience, “You guys liking this?” The audience responded warmly, with applause and scattered cheers. Feeding off the crowd, The Mastersons got brave and debuted a song they’d never played for an audience, “It Might Not Better.” Eleanor explained, “I guess it’s about gratitude and acceptance.”

For their penultimate song, The Mastersons went with perhaps their best known song, “Don’t Tell Me to Smile.” As Eleanor explained, it’s hard to smile and stay in tune. One evening, a woman came up to the stage and pushed the corners of her mouth up, making a smile. Eleanor said, “Don’t do that, it’s rude.” The woman persisted in encouraging Eleanor to smile, so Eleanor told her to “fuck off.” The woman made a face as if to say, “Who, me?” Eleanor gave her the message, “Yeah, you.”

Stream Transient Lullaby by The Masters on Spotify (… and don’t dare tell Eleanor to smile):

Like Steve Earle, Eleanor and Chris are tough, no-bullshit Texans with a strong progressive streak. They’ll tell you how they feel, and you’ll always get their honest opinion. At one point in the concert, they flipped over their guitars to reveal the messages taped to the back. Chris’s said “Pro-choice,” and Eleanor’s said “My Choice.” While they didn’t say so explicitly, this was obviously a statement on the highly restrictive abortion laws recently passed in several states.

Chris said to the audience, “Thank you for coming early, whether you meant to or not.” The duo closed on a new song, “In the Name of God,” which, Eleanor said, “is love.” Chris said that “people do a lot of stupid shit in the name of God,” a point that can’t really be disputed. Reflecting on my own tradition, and just sticking with the harmless stuff, it always seemed goofy to me that an all-powerful, omniscient being would really care that you spent a week foregoing bread for crackers. I love matzah ball soup, but it seems trivial to focus on that rather than on poverty, hunger, violence, etc.

But to get back to The Mastersons — they are righteous souls and terrific performers who delivered a great opening set, and I cannot recommend them highly enough.

Here are some pictures of The Mastersons performing at The Birchmere on May 20, 2019. All photos copyright and courtesy of Ari Strauss. 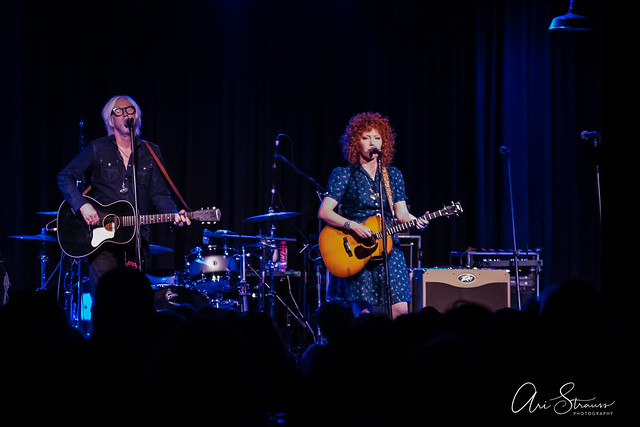 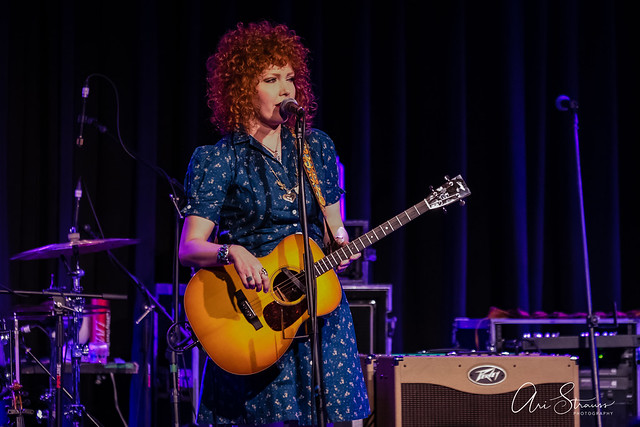 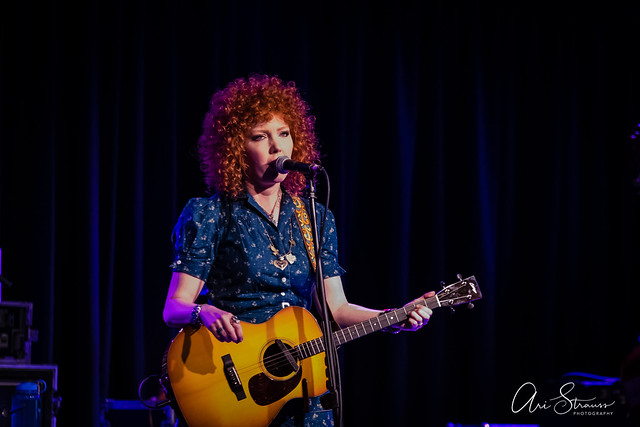 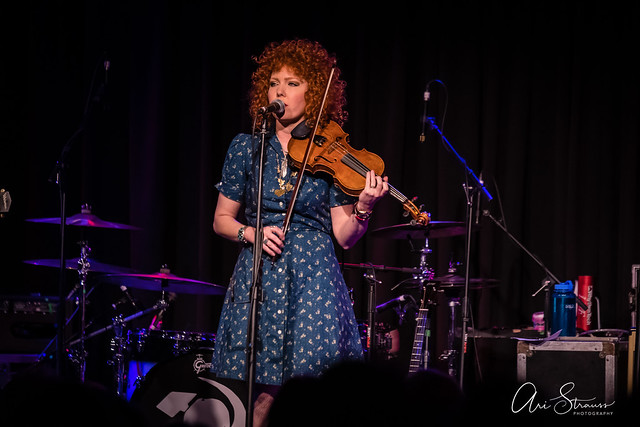 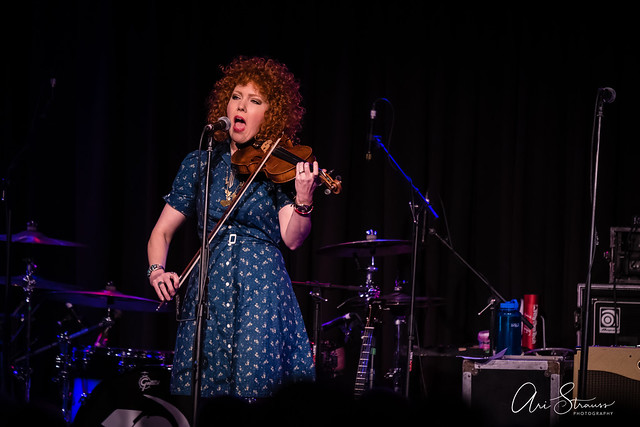 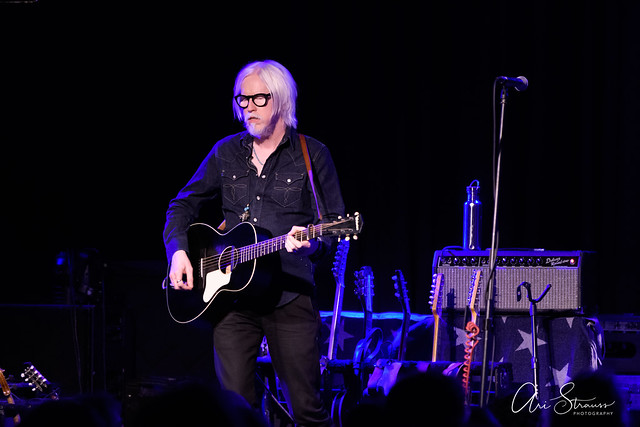 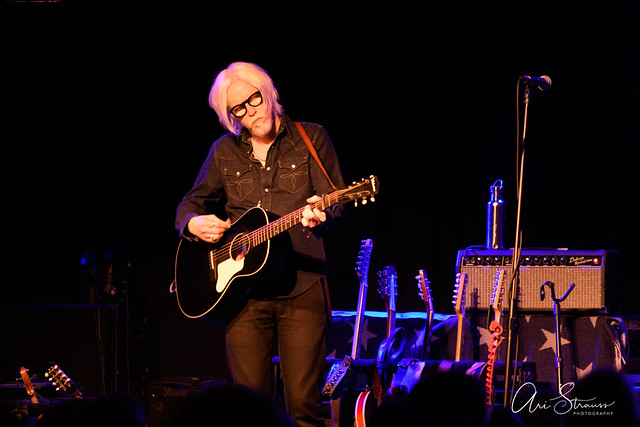 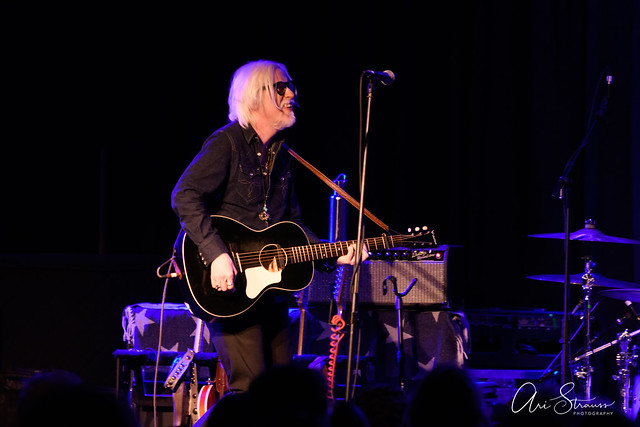 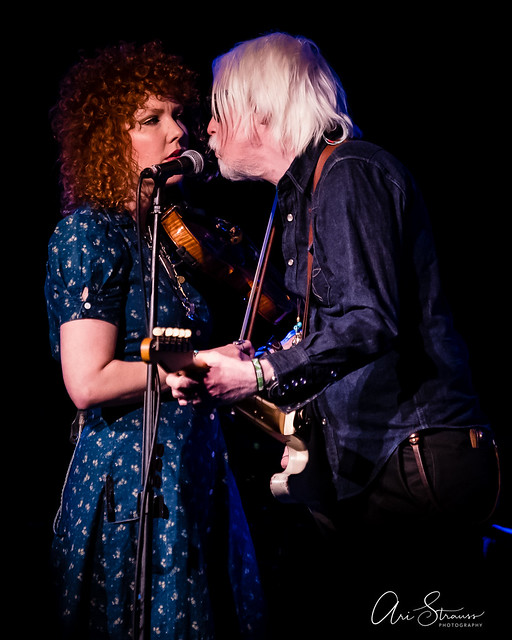