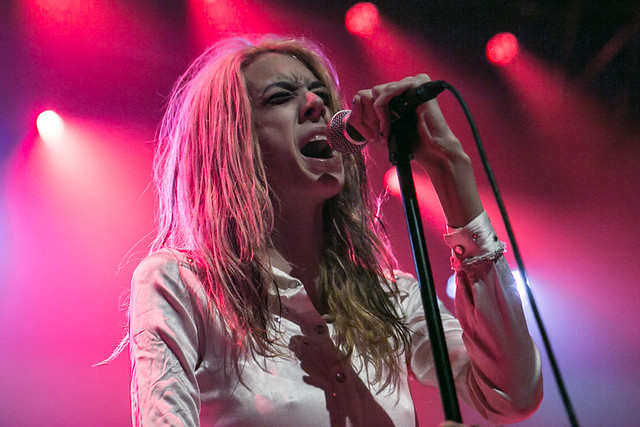 Vocalist Arrow de Wilde sang, trashed, and crawled around stage as if utterly possessed. Indeed, the spirit of rock n’ roll lives on inside her band Starcrawler, and the four Los Angeles punks struck like glam lightning in an opening set for The Distillers at 9:30 Club recently.

On May 31, Arrow and guitarist Henri Cash dominated the front of the stage, looking as if they were ready to storm a Western disco. The two musicians played *hard* as Arrow became increasingly crazed throughout Starcrawler’s set while Henri nailed massive riffs into the ground. While both are incredibly frenetic, they are a study in contrasts — Arrow moved about, often up and down, while Henri crushed sound into the floorboards.

Neither one stood still for very long, and indeed as Arrow performed, she continued to paw and scratch as if under the affects of a powerful drug. At points, she literally ripped her clothes off, flexing her gaunt body as a prop in the act that something was very wrong. The madness was punctuated by a wild-eyed Arrow running off the stage during the band’s last song, leaving the rest of the band to thrash about quite melodically. (We saw Arrow hobnobbing later at the end of the show, and she was fine despite the convincing craziness.)

Starcrawler released their debut self-titled studio album via Rough Trade Records in 2018, and they’ve continued to record this year, notably with a cover of “Pet Sematary” by The Ramones for the recent remake of the Stephen King film and “She Gets Around,” a new single that might suggest a sophomore album coming quickly.

The band have all kinds of talent and all kinds of energy, so new material would scarcely seem a surprise. Their very punk, rather glam, and a little bit country look and feel suggest they follow in the footsteps of fellow Los Angelos X,

The new track, “She Gets Around,” proved a wonderful example of how the band comes together. Arrow’s smooth and assured vocal played over pulsing guitars which in turn were backed by the clapalong rhythms of Austin Smith (drums) and Tim Franco (bass). The drums of the instrumental mix were particularly subtle and powerful throughout the entire show, and Austin deserves a lot of credit for the appealing glam sound that constitutes Starcrawler’s modus operandi.

Starcrawler played their cover of “Pet Semetary” at the midpoint of the show. Arrow’s voice got husky, and she sang part of the song close to the floor, while Henri’s hands raced over his guitar, never pausing, never breaking. Henri led from the hip, injecting a perfect dose of swagger into his amped up version of the number.

In the last selection of the set, Arrow remained wildly unpredictable, hopping from the stage and then floating into the audience to crowd surf while her bandmates pounded away at their instruments. (Arrow’s super thin appearance would suggest she may be the lightest crowd surfer ever.) After surfing, Arrow darted away and Henri stood to the side, leaving Austin and Tim to close the show with a tremendous rock crescendo.

This was a terrific gig for Starcrawler, who served as a great complement to The Distillers while not being at all the same to the headlining quartet. The opening spot demonstrated Starcrawler can more than effectively hold bigger stages, paving the way for what is sure to be a monster tour in the name of that pending second record. Check out Starcrawler’s website and catch the band live near you. You are guaranteed to enjoy the show.

Here are some pictures of Starcrawler performing at 9:30 Club on May 31, 2019. All photos copyright and courtesy of Paivi Salonen. 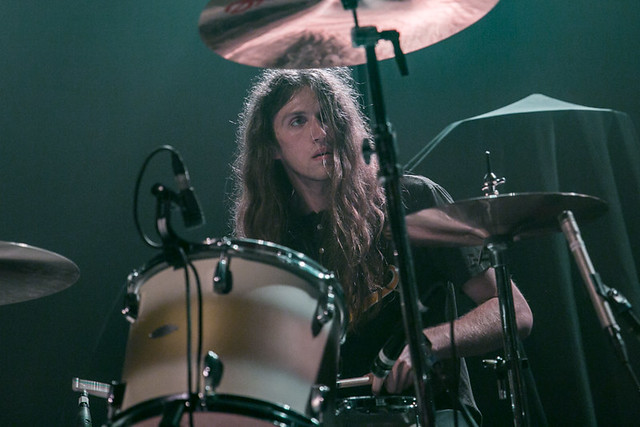 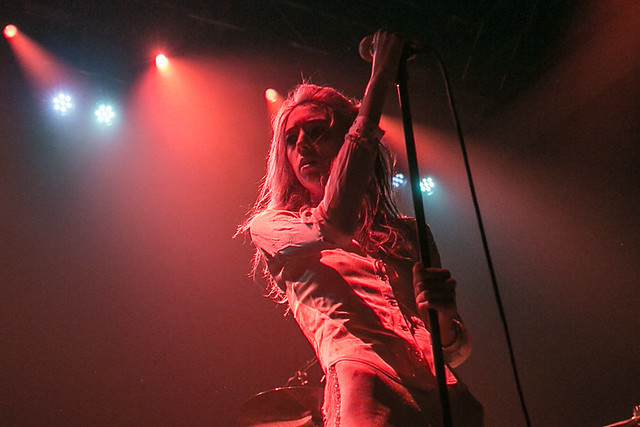 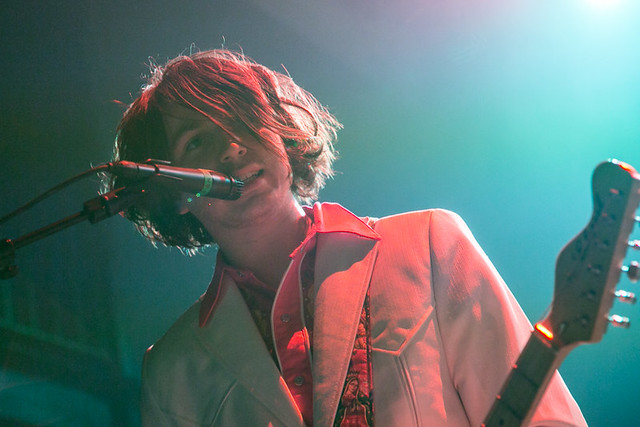 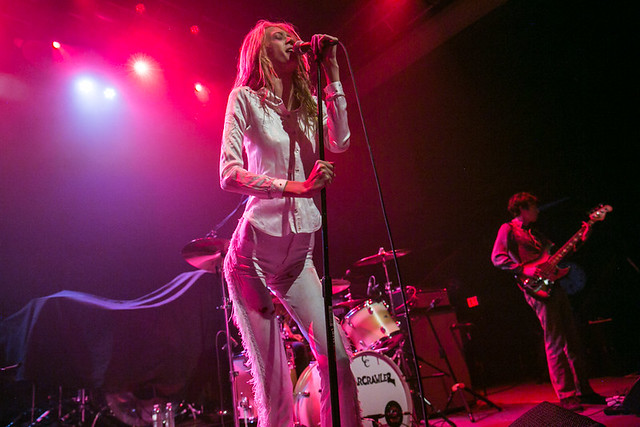 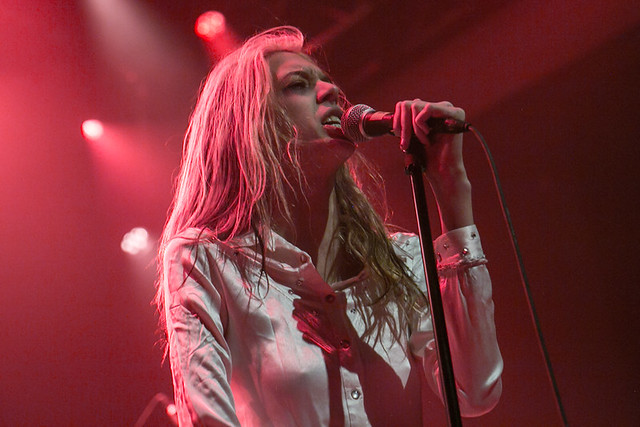 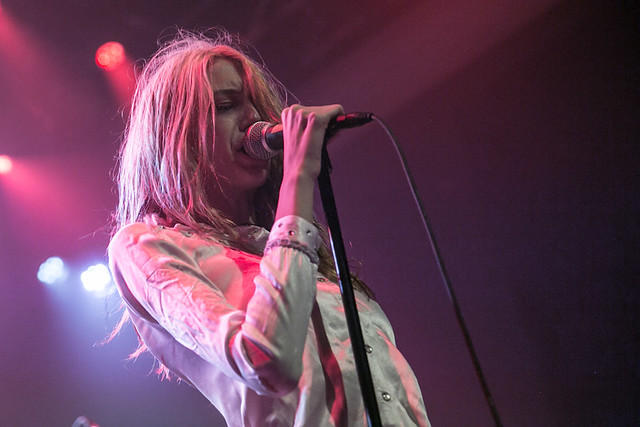 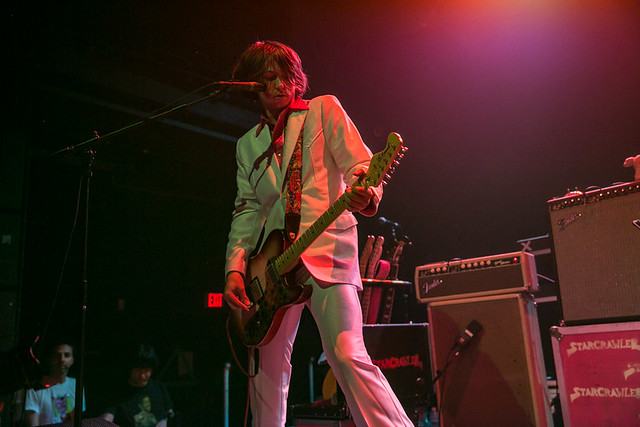 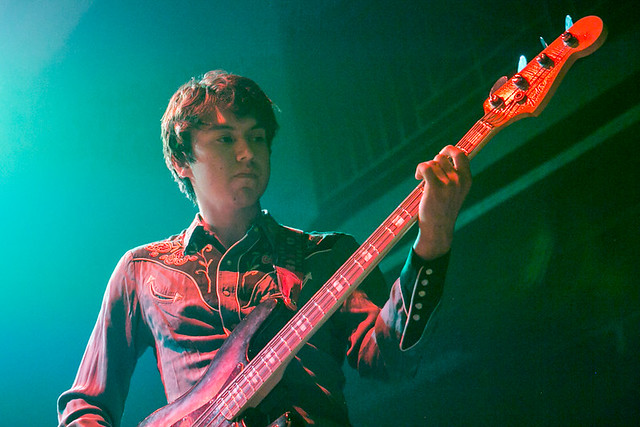 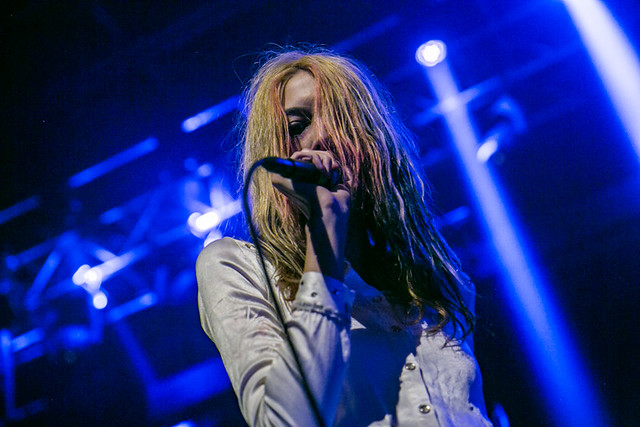 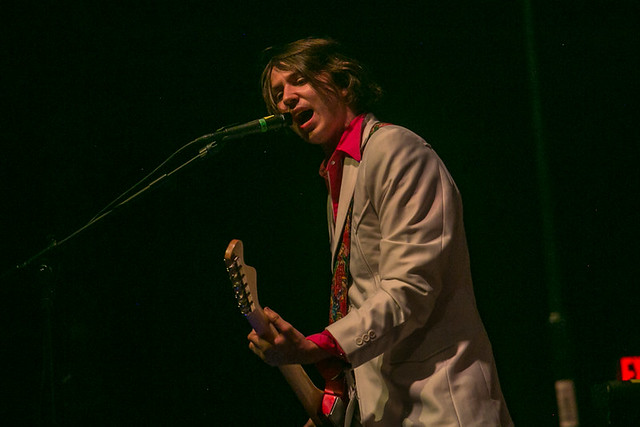 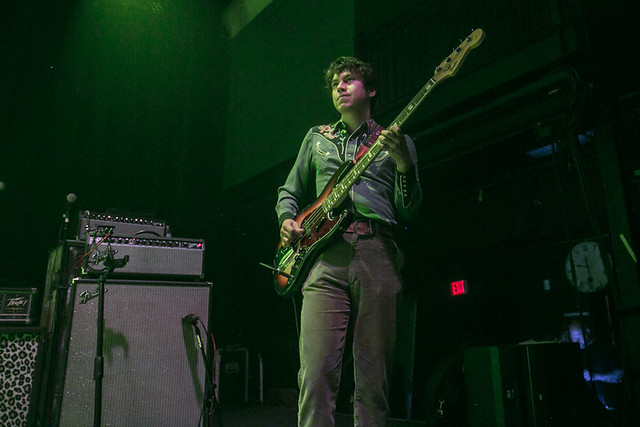 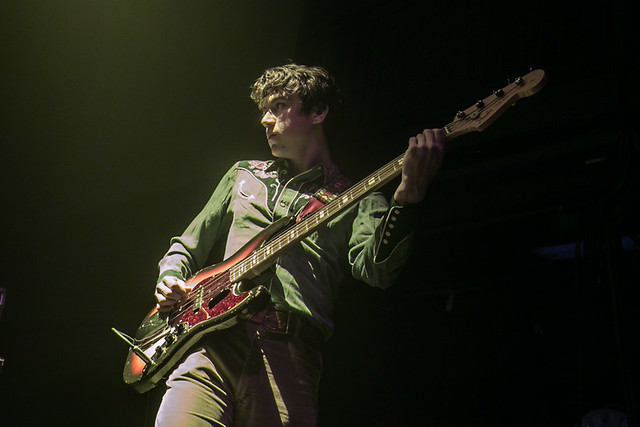 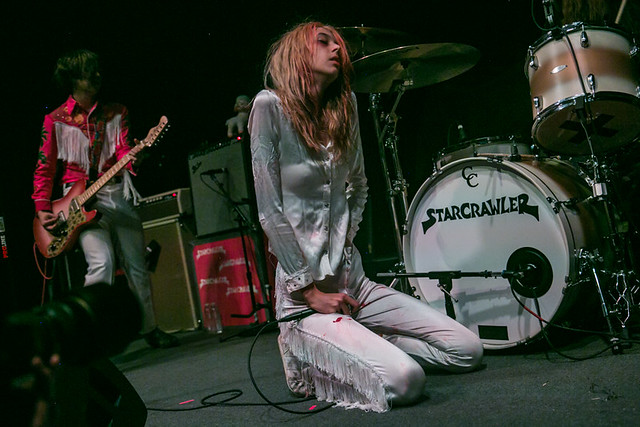 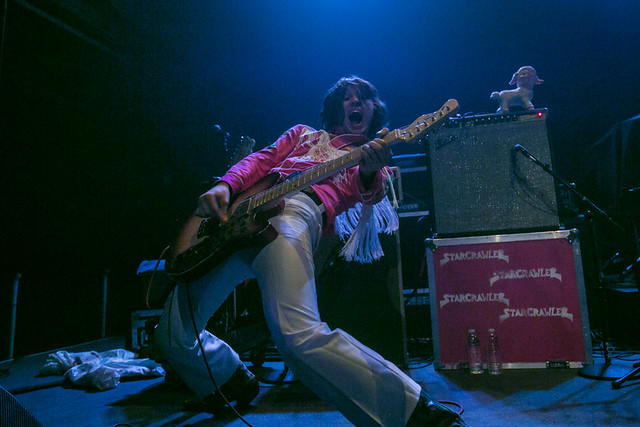 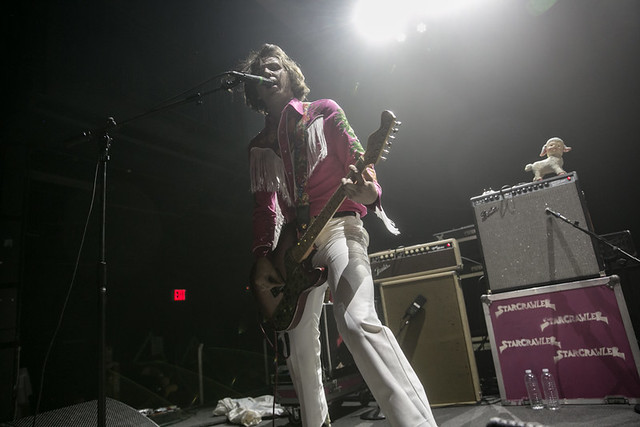 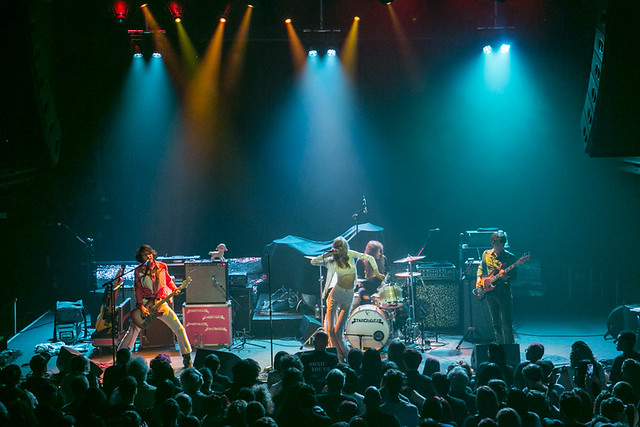 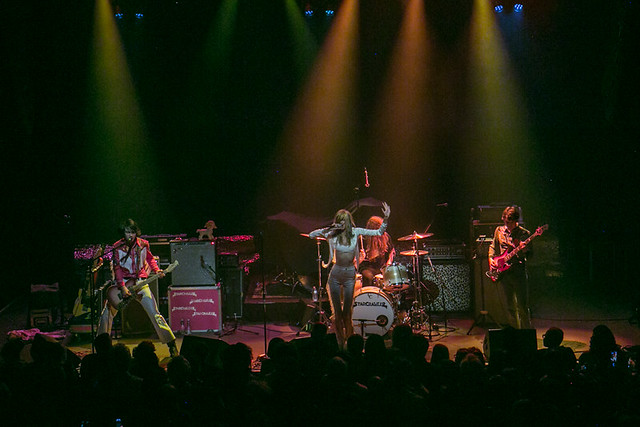 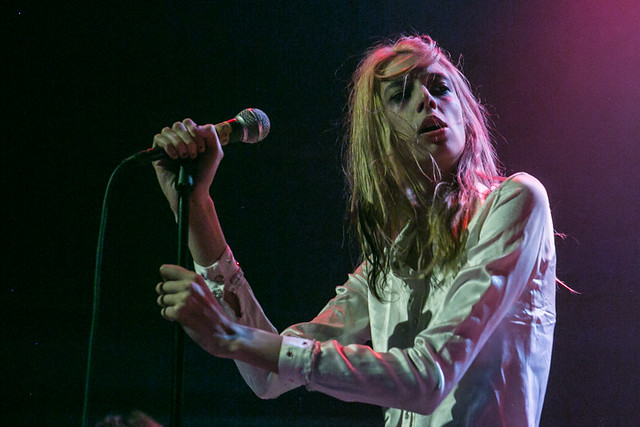