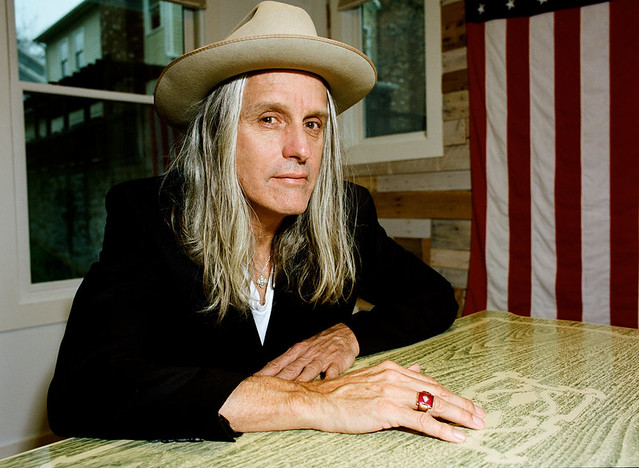 I must apologize, dear reader, but I must admit before I can continue that I cannot do justice to Steve’s storytelling. It is complex, subtle; it winds around itself; I had to capture the gist over the exact words. His elaborate storytelling style has some similarities to Todd Snider’s, and his stories are as much the highlight of his set as the songs.

For one reason or another, the lyrics that Steve and Jewel had written had ended up in the water, and they’d decided that that one song they’d written was pretty good. They got the lyrics, and then they drove back to San Diego, where they went to an all-night taco place in a seedy neighborhood at about 2am. Three prostitutes were sitting near them. One asked if they were hippies. “I guess so,” Steve answered.

Jewel and Steve each played the song. There was silence for about 15 seconds. One of the prostitutes said “Girl, you need to record that because white boy can’t play,” which was met with mmm-hmms.

Of course, Jewel did record the song. That song went to #2, and the album, Pieces of You, sold 12 million copies in the United States. Steve said that he was glad that Jewel recorded the song, because if he had recorded the song it wouldn’t have been a hit. He got to play guitar on it, and he was proud to say that that song had payed for him to send his parents on an Alaskan cruise in a suite overlooking the water. Steve said that he lost mother last year at 89, and he’d been there, praising hospice workers as incredible.

Stream Shine On by Steve Poltz on Spotify:

Before he got to the Jewel material, Steve already had the audience eating out of his hand. When Steve came out, he started with a bit where introduced himself in the third person. He started his set with his rambling, cross-continental epic “A Brief History of My Life.” The song journeys from Canada to California and into the Arizona desert, and large sections are delivered in the style of a talking blues. Most striking were Steve’s descriptions and impressions of famed radio baseball announcers: an early announcer for the San Diego Padres, Jack Buck of the St. Louis Padres, and Hary Carey of Chicago Cubs. He demonstrated not only their voices, but the peculiar way in which Carey would butcher the Latin names.

While Steve has recorded a live cut of this song, that cut differs from how Steve played it Saturday night. The recorded version doesn’t have Steve’s amazing impressions. This is something you can only see live, and it *is* well worth seeing live.

Steve co-wrote his second song, “Over the Top 40,” with guitarist and singer-songwriter Molly Tuttle. On this number, Steve really showed off his fingerpicking skills. Compared to a lot of acoustic singer-songwriters, especially, they’re quite impressive.

Steve last played The Birchmere opening two nights for Mike + The Mechanics. He said that while you might think that’s a strange combination, it was a lot of fun — and it wasn’t nearly as strange as opening for Styx. Steve was shocked, he said, when got to the call open for them, and he didn’t hesitate to take it, as he loves Styx. But the actual experience was pretty strange. A local “morning zoo”-type radio guy came out to open the show and was hyping the crowd with Styx lines and then just suddenly introduced Steve. That fell pretty flat as the audience was then hyped for Styx.

Steve played “Shine On,” the title track of his latest album, and we were back, somehow to storytime. It was 1970, and Steve was a teenager besotted with a Jewish girl he’d met in a record store. Being a Polish Catholic, his mother had forbidden him to pursue the Jewish girl, which of course only made her more appealing. One night, this girl’s parents were out, and Steve went over to her house. For no particularly good reason, he climbed in her window, when he could’ve just as easily walked in the front door.

Again, I emphasize that Steve’s details make this story something much more I can do justice. Yes, the record player was on, and these two teens were locking their braces together as they made out. And then came the revelation: The girl put on James Taylor. Steve had two buttons of her jeans undone, and was as he put it, nearing the “promised land,” when the music got to him and he stopped. He asked if he could borrow the record and ran home.

What makes this story even better is that many years later, after the big hit with Jewel, an interviewer noticed that his fingerpicking style appeared to be influenced by James Taylor. Steve told the interviewer about his moment of revelation, and the interviewer got James Taylor on the phone. Steve proceeded to tell James Taylor the story, which was met with about 20 seconds of silence. Then James said, “I certainly hope you’ve gotten laid since.”

Steve closed his set with two more original songs, “Folk Singer” and “I Want All My Friends to Be Happy.” “Folk Singer” recounted the joys and stresses and being a wandering a minstrel today, while the latter strong expressed Steve’s love and kindness. At the end of Steve’s set, something happened I’d never seen before: an opener getting a standing ovation. And I as wandered out to meet Steve and get some song titles for this review, people could not stop talking about him.

I have a habit of letting myself be surprised by openers. It allows me to just experience new music, and sometimes I make wonderful discoveries. Steve absolutely falls on into the category of wonderful discoveries. Paul Thorn also deserves to be commended for having the confidence in himself to let Steve open for him. Some performers might worry that Steve would overshadow them, but Paul, who put on a high-octane show of his own, has an assured, balanced presence, and he really put together a great evening for the audience.