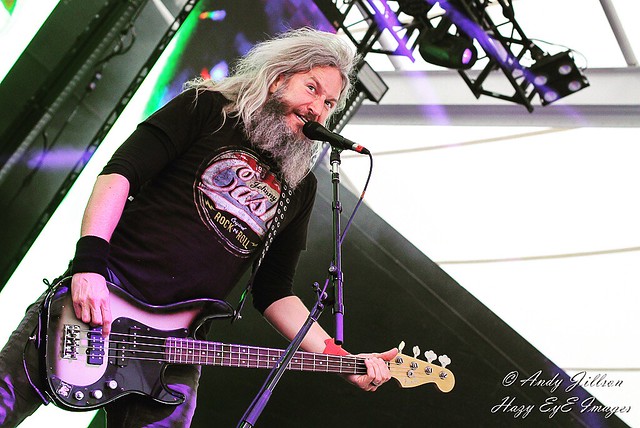 Another of my rock n’ roll dreams became a reality yet again. I had the pleasure of finally photographing one of my personal favorite rock bands. The hard-hitting progressive metal machine known as Mastodon stopped at MECU Pavilion in Baltimore recently, and I was there taking photos.

Mastodon is currently on tour with hardcore band Every Time I Die and proggy-screamers Coheed and Cambria. The Unheavenly Skye Tour features Mastodon performing their classic psychedelic prog metal album “Crack the Skye” in full, along with a few other Mastodon rockers at the end of their set. This was an excellent show at a beautiful venue. Having been familiar and well-versed in Mastodon’s music, I loved every fucking second of this show.

I can honestly say that being able to cover these rock legends has been one of my best experiences as a photographer and music fan. In my opinion this is a band that really combines that best of classic rock, prog rock, psychedelic rock, hard rock, and heavy metal. I was actually slightly nervous when I arrived at MECU Pavilion that evening; however, once I was in the photo pit standing in front of Mastodon my nerves were calmed, and nothing but pure joy and excitement flooded my system. As usual I was allowed to photograph the first three songs from the photo pit. This was a rare case when the first three songs played by a band are quite long. The first three songs on Crack the Skye run just over 14 minutes — a good amount of time to photograph a band from such a great vantage point.

The songs “Oblivion,” “Divinations,” and “Quintessence” kicked off Mastodon’s set for this tour, and what a fucking rush it was witnessing this musical mastery up close and personal. I certainly could have taken more photos of Mastodon, which consists of Brann Dailor (drums/vocals), Brent Hinds (lead guitar/vocals), Bill Kelliher (rhythm guitar/backing vocals), and Troy Sanders (bass/vocals); however, I could not help but stand in awe and really live in the moment and absorb as much of the live music as I could. I was sure to enjoy all the shredding and the accompanying visuals while also obtaining the photos I’ve worked so hard to finally snap.

Stream Crack the Skye by Mastodon on Spotify:

In addition to playing Crack the Skye in its entirety, Mastodon also played the songs “Blood and Thunder” and “I Am Ahab” off their 2004 album Leviathan, “Crystal Skull” off 2006’s Blood Mountain, and “Ancient Kingdom” off their most recent studio release, 2017’s Emperor of Sand.

The crowd was seemingly every bit as excited as I was about Mastodon playing in Baltimore, and most of the audience were rocking out and singing along to a large majority of the songs. The visuals and lights during their performance were also impressive. I just wish Mastodon had played a longer set that was later in the evening. Anyway, the time flew by. I was in and out of the photo pit, and the whole show was over in a blink. I may have blacked out in musical ecstasy while shredding along with the other Mastodon fans in attendance.

Don’t be a damn fool and miss Mastodon on this tour! And the other bands on the bill ain’t too shabby either!

Here are some photos of Mastodon performing at MECU Pavilion in Baltimore, MD on June 2, 2019. All images copyright and courtesy of Andy Jillson.