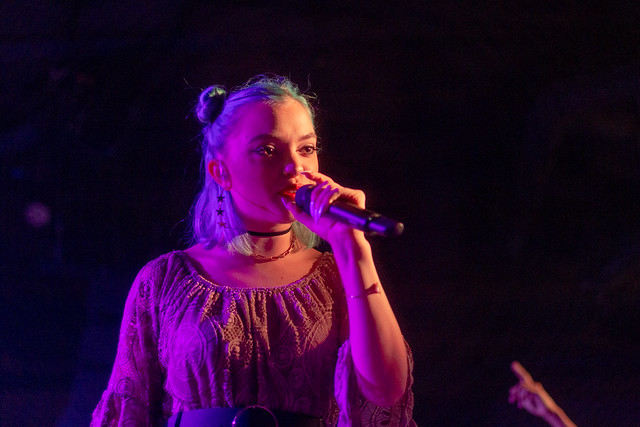 On June 6, the band played the recently released “Better By Myself” and “Close My Eyes,” along with some unreleased songs and songs from their debut album From the Outside and EP Brand New Moves.

Watch the official music video for “Better By Myself” by Hey Violet on YouTube:

Consisting of Rena Lovelis on lead vocals, her sister Nia Lovelis on drums, and Casey Moreta on guitar, Hey Violet interacted with the audience and each other throughout the show. Both Rena and Nia introduced songs, and everyone on stage, including the band’s touring bass player, talked to the audience at least once or even a few times. As much as concerts are planned and rehearsed, the on-stage banter felt sincere. At one point in between songs, Rena talked about a time the band had previously visited DC — they were on a tour of the White House when she accidentally went into a room she wasn’t supposed to enter and received a scolding from security personnel. “I was trying to hang with Obama,” she joked.

Hey Violet has its roots in rock, where Rena and Nia played in Cherri Bomb in their early teens, opening for bands like the Foo Fighters. They’ve shifted to pop music over the years, but many of their songs evoke some of their rock roots when played live. For example, the band’s most widely-known track “Guys My Age” has trap beats in the recording that aren’t used live, highlighting sounds from the on-stage instruments.

Watch the neon-soaked official music video for “Guys My Age” by Hey Violet on YouTube:

One of my personal favorite songs from the show was the currently unreleased “Queen Of The Night.” Introduced as a song about driving down the Pacific Coast Highway and “not giving a fuck,” it was a lot slower and more balladic than any other Hey Violet track. In the future, this song will definitely become that part of a concert where the audience pulls out their phone flashlights and waves them in the air as the band plays an emotional song.

Toward the end of the show, Hey Violet covered of Coldplay’s “Viva La Vida.” The song started stripped down and the rest of the band came in at the start of second verse, where it swelled into an expressive, larger-than-life melody with the crowd singing along in unison. “Viva La Vida” is the first older song (it is over a decade old, after all)  that the band has covered in some time, with their other recent covers being of more contemporary hits including Taylor Swift’s “Blank Space” and The Chainsmokers’ ”Don’t Let Me Down.” I, for one, am hoping they do more covers like this.

Hey Violet’s live shows not only brings energy to their recorded tracks — through Nia and Casey playing with visible enthusiasm and Rena’s powerful belting — but they also show the band members’ personalities that the audience can connect to. Anyone walking out of their concerts will know the band a little better, and maybe know each other better too.

Here are some pictures of Hey Violet performing at Union Stage on June 6, 2019. All photos copyright and courtesy of Angel Kim.