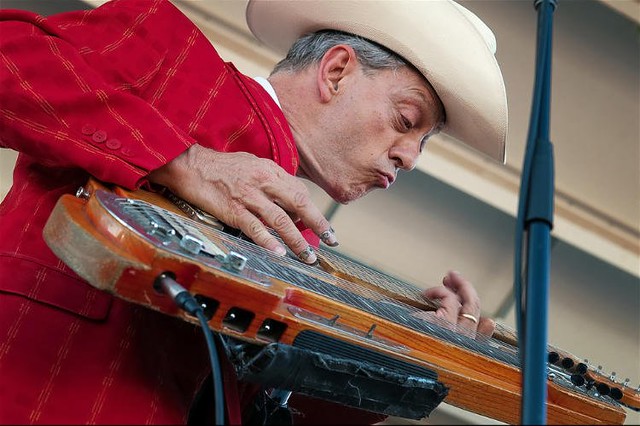 With a three-piece backing band of bass, drums, and his wife, Tanya Rae, on acoustic rhythm guitar, Junior played songs from the length of his decades-long career, including instrumentals, on June 8.

Junior is instantly recognizable for his custom “guit-steel,” a double-necked design combining an electric and a steel guitar. The unique construction of the “guit-steel” allowed Junior to switch between electric and steel guitar mid-song. Junior got the idea for the instrument in a dream he had of the two instruments melting together during his days on the southwest club circuit.

Alt-country can refer to Americana, the marriage of alternative rock and country music, or simply country music outside the mainstream. Junior falls into this third category. His brand of Bakersfield sound, exemplified on “Party Lights” falls within country music traditions, but honky tonk isn’t played on pop-dominated country radio.

Junior also took an irreverent approach to his material. He played one of his more successful songs, “My Wife Thinks You’re Dead,” a country waltz, dedicating it a couple who’ve seen 38 of his shows. Junior won a CMA Music Video of the Year with this one back in the ’90s. In the video, 6′ 7″ college basketball phenom Gwendolyn Gillingham chases and manhandles the diminutive musician. One cannot imagine George Strait or Randy Travis allowing himself to be portrayed that way.

Junior’s musicianship incorporated a variety of styles. Some hewed to country traditions, like the rockabilly of “I Hung Up It Up,” with its blazing steel guitar solo. “Running with the Wind” had a country-folk vibe. But the surf-accented country rock of “Broke Down South of Dallas” was decidedly nontraditional. One can hear some melodic similarities between Junior and fellow alt-country/surf rockers Southern Culture on the Skids although their presentations were very different — Junior wears a suit and a tie, and Southern Culture on the Skids have a white trash gimmick.

During “Long Walk Balk to San Antone,” Junior lost his reverb as his amp gave him trouble. He declared that, as the guitarists in the audience knew, “Life without reverb is no life at all.” Junior and Tanya together coaxed the amp back into functioning a few times throughout the show.

Stream Deep in the Heart of Me by Junior Brown on Spotify:

Junior highlighted his new album, playing a stretch of several songs from it midset: the title cut, “Deep in the Heart of Me” — a ballad, “Another Honky Tonky Burned Down,” and “Between Anger and Despair,” which featured a spectacular drum solo. Junior followed material from the new album with his old hit “Highway Patrol,” then he dedicated “The Better Half” to his wife Tanya, who he’s been married to 31 years. Tanya took a turn singing lead on one of her own compositions.

Junior moved into the part of the evening where he dealt with requests. The first song, “The Phantom of the Opry,” was requested the previous evening. He explained that Ryman was “where they used to play country music,” displaying his attitude about the current state of the industry.

By request, Junior played “Hang Up and Drive,” a humorous song about distracted driving. The song had several memorable lines, including “your pinterest doesn’t interest me” and “your instagram just caused a traffic jam.” For a man approaching 70, Junior seemed pretty aware of the various apps and technology that are out there.

After singing a duet with Tanya, Junior and the band played a series of instrumentals to close out the set. In the second, Junior threw Ennio Morricone in a blender with Dick Dale. For the last song of his set, Junior play a country-fried instrumental cover of “Secret Agent Man” that was on holiday at Venice Beach.

Amidst raucous applause, Junior and the band returned for an encore, and he went with classic material. First, he played “I Gotta Get Up Every Morning,” from 1996’s Semi Crazy. Junior closed out the evening with “Too Many Nights in a Roadhouse,” a tune from his first album, which Junior described as a 45 RPM “with a hole in the middle” (just think how much more music could’ve been recorded without that hole!).

However you like to call his music, Jamieson “Junior” Brown is a hell of an entertainer, and worth getting up to see. Check out his website for tour dates near you.