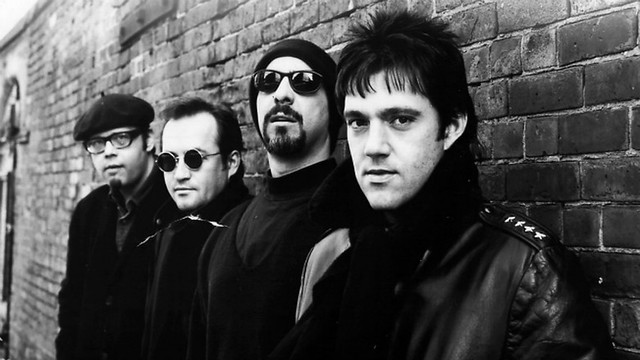 Huge fans of Buddy Holly and the ’60s British Invasion (particularly the Beatles, Kinks, and The Who), along with Elvis Costello and Nick Lowe, the band incorporated these influences and wore them proudly on their musical sleeves as they developed their own original style and sound.

Signature songs like “Blood and Roses,” “A Girl Like You,” “Only a Memory,” “Behind the Wall of Sleep,” and a raft of critically-acclaimed albums (Especially for You, Green Thoughts, 11, and many others) have cemented the band’s place in the hearts, minds, and ears of their devoted worldwide fanbase.

Watch the official music video for “Blood and Roses” by The Smithereens on YouTube:

The band is currently fronted by another famous veteran of the power-pop scene — Marshall Crenshaw! Marhshall is enjoying his time touring with the band while also having established his own noteworthy career, which includes having a Top 40 hit in 1982 with “Someday, Someway.” Marshall does a great job of carrying on the tradition and high standards of The Smithereens.

Read our Parklife DC interview with Jim Babjack of The Smithereens

Parklife DC is giving away a meet and greet, along with a pair of tickets, to see The Smithereens at The Birchmere. To win, simply leave a comment on this blog. You can leave any comment, but we would like to know your favorite song by The Smithereens.