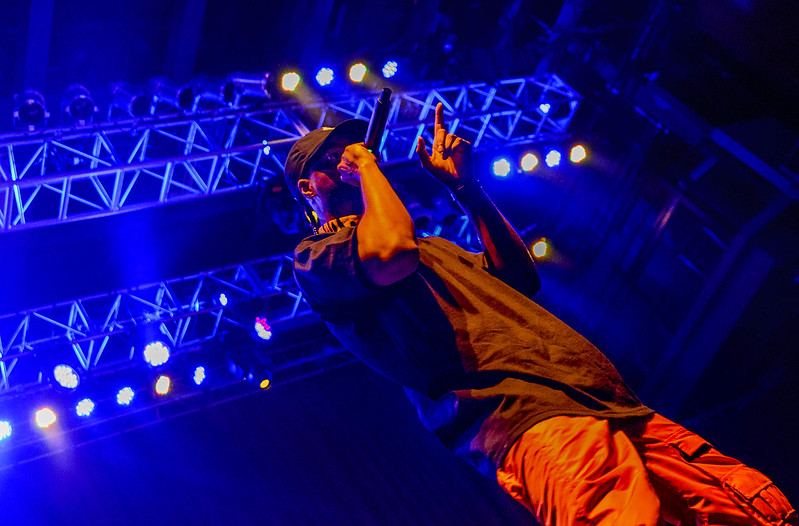 Xavier Wulf performs at The Fillmore Silver Spring on June 7, 2019. All photos copyright and courtesy of AJ Waugh (@Waufflez).

Chants of “WHO!?” rang out around The Fillmore Silver Spring recently when Xavier Wulf’s The Hollow Squad Tour rolled into the DMV.

The former Raider Klan member’s status as one of the first “soundcloud rappers” has provided him a cult following for several years — and legendary status in some underground circles. Xavier’s Southern hip-hop flow is reminiscent of his fellow Memphians Threes 6 Mafia, but also his references to things like Anime and Manga, foreign sports cars, samurai swords, and BMX biking have helped him build an extremely diverse and loyal fan base over the years — and they showed up and showed out at The Fillmore Silver Spring on June 7.

Even before Xavier hit the stage opening acts, Marty Grimes and DC’s own Beau Young Prince had the crowd partying; Marty even gave away the pizza from his dressing room to the crowd and let them know, “When I eat, everybody eats.” Once Xavier Wulf arrived, there were moshpits all over until the minute he got off the stage. He gave the love right back to the people, hopping in the crowd and giving high-5’s all set long.

Xavier even had a small confrontation with security early in to the show, when they refused to remove the barricade upon his request so the crowd could be closer to the stage. He ran through a set list of all his standout records including “Thunder Man,” “Akina Speed Star,” “Check It Out” (my personal favorite), and “Space Punks” off his newest EP , “Battlestar X Part 1” to name a few.

Watch the official music video for “Space Punks” by Xavier Wulf on YouTube:

The Hollow Squad Tour only has a few dates left wrapping up at the end of June at Lyrical Lemonade’s Summer Smash Festival in Chicago. Definitively check it out if you have the chance.

Here are some photos of Xavier Wulf performing at The Fillmore Silver Spring on June 7, 2019. All photos copyright and courtesy of AJ Waugh (@Waufflez).

Notify me of new comments via email.

Notify me of new posts via email.

To find out more, including how to control cookies, see here: