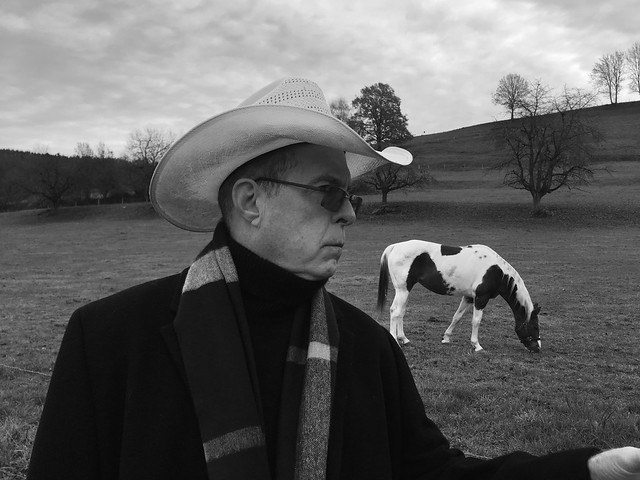 Two small paintings of equal size framed the stage at Jammin’ Java. Stage right, the face of Johnny Cash sat on one chair, and stage left, the face of Leadbelly, on the other. Folk/Americana musician Tom Russell began painting (seriously, at least) in 2003, and his work now appears in galleries and hotels. His works also appeared with him at Jammin’ Java recently.

Later in the show on June 12, Tom mentioned that his six-foot tall portrait of Willie Nelson hangs in the lobby of the Austin Hyatt.

Carrying his acoustic guitar, wearing a cowboy hat, scarf, and sunglasses, Tom came out on stage, striding to the microphone between his paintings. Only, this wasn’t Tom Russell. This was Tom’s opener, who happens to look exactly like Tom. Tom’s opener treated the audience to a medley of fragments: “Pancho and Lefty,” “Carmelita,” “Lakes of Ponchatrain,” “Carrick Fergus,” “Raglan Road,” “Wreck of the Old ’97,” a little Bill Kirchen. He mentioned running into Jimmie Dale Gilmore and Dave Alvin just the other day and played a line of Jimmie Dale’s “Dallas.”

Tom broke his schtick and made his greetings and introductions. He told the audience that he’d been reading the new Warren Zevon biography backstage before moving into his set. He started off his first set with some material from his 2015 album The Rose of Roscrae, which he described as “The Odyssey in cowboy hats.” Tom joked about its length: at 52 tracks, you’d have to drive to New York to hear the whole thing. The album tells the story of Johnny riding across the West to impress a woman that he loves back in Ireland, and it features a host of guests.

Tom started with the title track. Johnny’s drunk, and he’s been beaten bloody by his sweetheart’s father. He spends all night walking from Roscrea to Templemore. Tom related that an Irish woman told him that there are some problems with the song: He’d misspelled Roscrea, and it’s only a 20-minute walk to Templemore. Tom defended the misspelling on the grounds that Johnny is dyslexic, and he said that Johnny’s walk took all night because of his drunken, beaten state.

Tom next played “Hair-Trigger Heart.” He began the song speaking to the audience, telling them Pancho Villa’s last words to his driver: “Don’t let me die like this! Tell them I said something!” He got the audience to sing along, and at the right times, to the chorus, “I’ve got a hair-trigger heart.”

Tom recorded “Guadeloupe” on Blood and Candle Smoke with some of the members of Calexico. He wrote it after visiting the Shrine of Guadeloupe in Mexico. He felt very moved by it as a fallen Catholics, and it’s his favorite ballad that he’s written.

Tom talked about his new album, October in the Railroad Earth, which he released as an LP, his first in some time. “I guess if we’re going back to LPs,” he said, “next it’ll be cassettes, 8-tracks, then Edison discs.” As an aside, he mentioned his book, Ceremonies of the Horsemen, and his research into tequila. He said never buy tequila that doesn’t say 100% agave.

Stream October in the Railroad Earth by Tom Russell on Spotify:

The first song that Tom played from October in the Railroad Earth was “Isadore Gonzalez.” On the album, he is backed up the Grammy Award-winning Tex-Maniacs. The song uses several elements of Latin music, such as the bajo sexto. The title character “Isadore Gonzalez” was a vaquero, a Mexican cowboy, who rode in Buffalo Bill’s Wild West Show. He died after being thrown from his horse during a performance in Bristol, England.

Before playing “T-Bone Steak and Spanish Wine,” Tom spoke about opening for his friend Ian Tyson, formerly of the folk duo Ian & Sylvia, at The Birchmere. Ian and Ramblin’ Jack Elliot were the best men at Tom’s wedding to his Swiss wife a dozen years ago. Tom now has dual passports.

T-bone steak and Spanish wine was the special every time Tom played a little place in California called Irene’s. He hadn’t been there in a long, long time. A few years ago, he took a wrong turn and he found himself back at the old bar and restaurant. The special was still T-bone steak and Spanish wine. He felt like he was in a time warp. He went inside, though, and had a lovely chat with Irene.

The title track of October in the Railroad Earth is based on a prose piece written by Jack Kerouac while he was working as a brakeman in San Francisco. While he was introducing the piece, Tom mentioned that legendary guitarist Bill Kirchen, who used to live in the DC area, sat in with him Austin.

Tom finished his first set with another song from October in the Railroad Earth, “Tonight We Ride,” and took a break. When he returned for the second set, he opened with “Leaving El Paso” from Folk Hotel. Tom said that he moved to El Paso to Santa Fe for three years, and describe the latter as having a “real retirement vibe.”

Tom returned to the new album, playing “Small Engine Repair,” about the guy who used to fix his lawnmower when he lived in El Paso. Although he only recently recorded the song, he wrote it in 2001. James Dean died on “Highway 46,” and Tom was driving on it the day that Merle Haggard died. He spoke wistfully of working with Merle a few times. As he tuned up to play “Mineral Wells,” he brought up his involvement on the Haggard tribute album Tulare Dust that Dave Alvin put together.

“Finding You” led into “East of Woodstock, West of Vietnam.” Tom discussed getting a master’s in criminology at UC-Santa Barbara. He followed his mentor to Nigeria in 1969 to teach, where he landed in the middle of the Biafran War.

The next song, Johnny Cash’s “Veteran’s Day,” led Tom into another tale of his international travels. He opened for The Man in Black in Switzerland. Johnny brought him back on stage during “Peace in the Valley” and asked him to sing the last verse, only Tom didn’t know the song. Johnny sang the entire last verse into his ear so that Tom could sing it for the audience. Tom played a medley of Cash songs that included fragments of “Folsom Prison Blues” and “I Walk the Line.”

Over the years, Tom made five appearances on David Letterman’s show. In 2007, he played the now-prophetic seeming “Who’s Going to Build Your Wall?” which asks about how a wall on the southern border will be built after the United States expels all the undocumented immigrants. The staff didn’t want Tom to play the controversial song, but Dave overruled them. The song later went viral. Tom began the song with a couple of lines from the Rolling Stones’ “Honky Tonk Woman” before beginning it properly.

“Who’s Going to Build Your Wall?” was the last song of the second set, and Tom received a standing ovation. He had promised to play “Navajo Rug,” which he co-wrote with Ian Tyson, and he fulfilled that promised in his encore. The song was covered by Jerry Jeff Walker, whose version differs from Tom’s.

The night at Jammin’ Java was a lovely night of songs, stories, and art with a multi-talented Renaissance man. Musician, writer, and artist, perhaps, as Guy Clark as once wrote, Tom Russell is an “old school man of the world.” His songs reflect an incredible range of experience, from growing up in L.A. to ranching in Texas to living in Africa in wartime. He brings together Kerouac and cowboys, and he writes with a perceptive social consciousness and a keen sense of narrative. Tom Russell is a unique figure in folk/Americana, a gifted musician with a distinct perspective that deserves your attention.