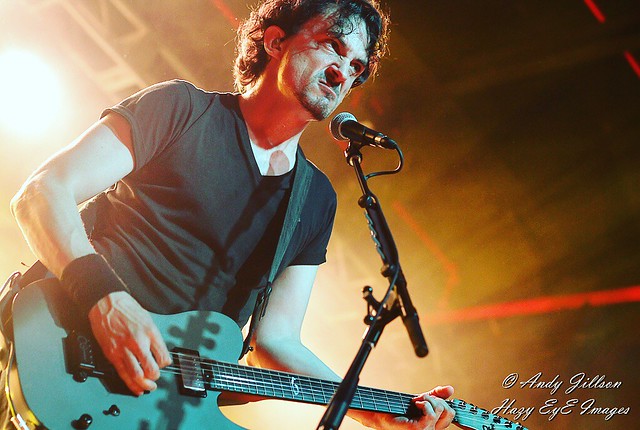 Gojira performs at The Fillmore Charlotte on June 12, 2019. (Photo by Andy Jillson)

The heaviest metal band in the universe, Gojira, stopped at The Fillmore Charlotte, in North Carolina, recently, and I was there taking photos and having my fucking mind blown.

Gojira are a progressive heavy metal band hailing from Bayonne, France. The band was formed in 1996 and the lineup consists of brothers Joe Duplantier (lead vocals, guitar) and Mario Duplantier (drums, backing vocals), guitarist Christian Andreu, and bassist Jean-Michel Labadie. I was fortunate enough to see Gojira perform as the headlining act at The Fillmore Charlotte on June 12. Their performance was other-worldly. Gojira has, in my mind, officially become the best metal band out there.

After Gojira announced a mini Road to Roo Tour with Deafheaven and All Them Witches, I was quick to fit it into my schedule somehow. Gojira has been on my musical radar for about three years. I was introduced to them by way of a Spotify and YouTube suggestion. Hahahahaha! Well done. Gojira has now become my favorite current band after catching their earth-shattering performance at The Fillmore Charolette.

I was already in a serious Gojira phase previous to this show, and I had realized how amazing they are a couple years ago, but their performance honestly blew me away and changed how I view them and heavy music forever. The energy in the room was intense prior to Gojira taking the stage. It was an overwhelming anxious, but positive feeling that overcame me as I stood stage right awaiting my opportunity to invade the photo pit. Myself and three other photographers were allowed into the photo pit to shoot songs two, three, and four. Looking back now, I can hardly recall what happened and what songs were played. I was literally covered in goosebumps and the hair on the back of my neck stood up. No shit! I did more rocking and losing my shit than photographing; though I was sure to snap a few good shots of each musician.

Despite basically blacking out in musical ecstasy during Gojira’s entire set, I held myself together for most of the show and can recall many aspects. The crowd was going crazy! Lots of head-banging, moshing, crowd-surfing, and of course drinking. This had to have been one of the drunkest crowds I’ve ever encountered. A few of the concert-goers were thrown out, and a couple were taken out by paramedics. I witnessed several near head injuries due to the amount of crowd-surfing and belligerency. Gojira was loud as fuck! It looked like they were really enjoying themselves during their performance too.

Gojira’s setlist was amazing. They played so many great songs. They are an extremely heavy band, but they’re also psychedelic, progressive, and extremely technical. I’ve never heard a tighter sounding band. And Mario Duplantier’s drumming is fucking ridiculous. So good. My new favorite drummer for sure. Songs that Gojira played that particularly stood out to me were, “Backbone,” “The Heaviest Matter of the Universe,” “Flying Whales,” “The Cell,” “Silvera,” “Ocean Planet,” “L’Enfant Sauvage,” and “Vacuity.”

Gojira played a mixture material from past albums; however they played four songs off their most recent studio album, Magma. Released on Roadrunner Records in 2016, Magma was nominated for two Grammy awards in 2016, and the band has been enjoying a much deserved boost in popularity since. Though not my personal favorite album, Magma is a great record and definitely showcases the bands musically versatility, and willingness to try out new sounds and styles.

Stream Magma by Gojira on Spotify:

What more can I say?!? Gojira are fucking amazing, and you’d be a damn fool to not immediately go out and buy some of their music and familiarize yourself. If you are at all into hard rock or heavy metal, you must listen to Gojira. They truly put all other hard rock/heavy metal bands to shame. And I just recently saw Slayer!!!

I was also fortunate enough to meet the members of Gojira. I hung out by their tour bus like a total teenage fanboy until about 2:30am. There were two other Gojira fans waiting as well. Super friendly fans, and Gojira were also friendly and approachable.

Here are some photos of Gojira performing at The Fillmore Charlotte on June 12, 2019. All images copyright and courtesy of Andy Jillson.