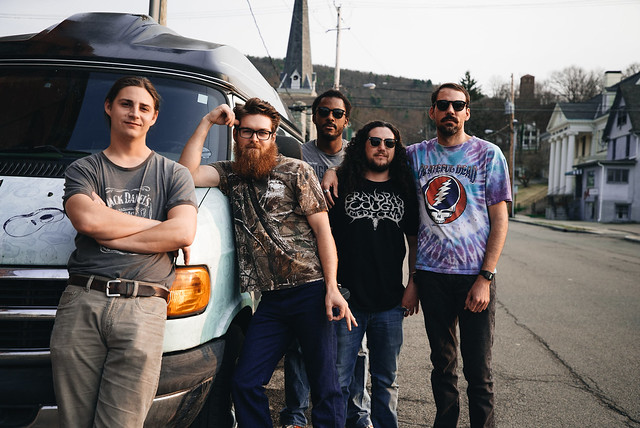 The crowd wanted to blow off steam and listen to some fun music, and the boys of Time Sawyer obliged in their recent debut headlining show at Hill Country. Even playing a murder ballad, the band kept it light and made it a good time.

Charlotte, North Carolina folk/country-rock band Time Sawyer  consists of Sam Tayloe on lead vocals and acoustic guitar, Luke Mears on electric guitar and vocals, and Houston Norris on banjo and vocals — all hailing from the Elkin foothills — and Court Wynter on bass and Jordan Nelson on drums from Winston-Salem in the Piedmont. They proved that they know how to bring the party.

That murder ballad, by the way, was “210,” and Court’s thumping bass solo was absolutely wicked. The song might’ve been about murder, but the instrumentals filled people with life: it made that audience want to dance. Time Sawyer used the old bluegrass trick of making music so bright and bouncy that the dark subject music just sneaks in there. The audience doesn’t even realize it.

Time Sawyer is nowhere near as bleak as classic bluegrass like Flatt & Scruggs, but they are able to sneak in their more serious material without spoiling the fun for much the same reason. The rhythmic chuk-chuk-chuk of Houston’s banjo accomplishes a lot of this, inserting a high lonesome Appalachian sound and an additional percussive element into the band’s music. The satisfying thunk of the instrument’s strings puts a danceable rhythm on top of the bassline and the drums.

Starting at a fast pace with their opening number, “All The Time,” Time Sawyer kept it loose, hooking their audience, before slowing down. In the finest tradition of Appalachia meeting the Dead, they raved up into “A Far Away Farewell from Rose.” A couple songs later, on “Needle in a Haystack,” Luke took over lead vocals. Between Sam and Luke, they slipped in a plaintive ballad, “Annabelle Please,” which begs a lover not to leave.

Later in the set, the band fittingly jammed its way into Todd Snider’s “Sideshow Blues.” (Snider played Dylan to the Hardworking Americans’ Grateful Dread on tour together a few years ago, and he has some great stories to tell.) Luke’s driving electric guitar intro gave a real rock ’n’ roll feel to “Anyway, All the Way.”

The audience, which had been rowdy all night, showed its appreciation and cheered for Time Sawyer to make its encore. They returned to the stage to a play couple bona fide classics. Muck oozed off of their cover of “Born on the Bayou,” and they played a ripping rock arrangement of “Rolling in My Sweet Baby’s Arms.”

Time Sawyer plays rock and roll music mixed with a little bit of a lot of things. There’s some bluegrass, folk, and country in their DNA. But if your idea of “roots music” is something stale, something downbeat and heavy, you couldn’t be more wrong. Go to a Time Sawyer show, and you’ll find out how much fun roots music can be.