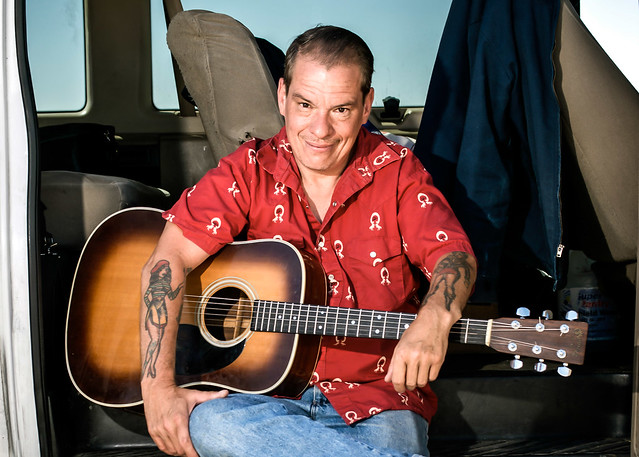 “Happy Father’s Day,” Wayne Hancock said, “unless you didn’t know. Then nice surprise!” With that, Wayne and his band launched into an instrumental during their recent appearance at Hill Country in DC.

The Texas singer — known for his brand of alternative honky tonk, mixing rockabilly, Western swing, and old timey country — put his off-kilter personality on full display at Hill Country on June 16. Working without a setlist, Wayne called songs on the fly — a brave, confident move with a full band, including electric and pedal steel guitar, bass, and drums. It lent a loose, relaxed atmosphere to the evening, and the audience got a unique, spontaneous performance.

Declaring, “It’s Father’s Day, that’s a good reason to drink,” Wayne called for “Dog Day Blues.” “Slingin’ Rhythm” was next, and Wayne told the audience to be careful not to get any on their shoes. He followed that with his first cover, the Hank Williams’s classic “Jambalaya.”

Stream Slinging’ Rhythm, released via Bloodshot Records, by Wayne Hancock in 2016, on Spotify:

Looking fantastic, healthy, and strong, Wayne told the crowd, “I don’t drink anymore.” Engaging with a fan, he asked what the man was drinking. “Pabst Blue Ribbon,” he answered. In response to a request from the audience, Wayne sang “Lousiana Blues.” Then, “in honor of my being sober,” he played “AA Daddy.”

Wayne lost one of the strings on his acoustic guitar. He pivoted by playing “Two String Boogie,” a song he mentioned that he wrote 25 years ago. After he finished singing, he left the stage to restring his guitar, and the band played a couple of instrumentals. The second was the famous and highly recognizable “Sleepwalk.”

Returning with a working guitar, Wayne played the stoner tune “Reefer Boogie,” a theme he came back to later with a cover of “You’re a Viper.” Someone in the crowd shouted for “Cappucino Boogie.” A bit of back-and-forth led to Wayne saying “I wrote it, I can do it however the fuck I want!”

“Ride” led into the murder balled “I Killed Both Them.” “Flatland Boogie” celebrated the plains of Texas. “Johnny Law” was in the outlaw spirit, as was “Breaking and Entering.” “Route 66” celebrated the freedom of highways and the vastness of the continent. “Cold, Lonesome Wind” felt like a song that should be in any and every Western movie: just the right amount of darkness and bitterness to flavor the cowboy mystique.

Hank Williams III has covered “Thunderstorms and Neon Signs” and several other songs by Wayne. Wayne is a hell of a songwriter, with authenticity and an earthy quality. He’s a genuine character, and any show he puts on is a one-time experience. His performance has never been stronger.