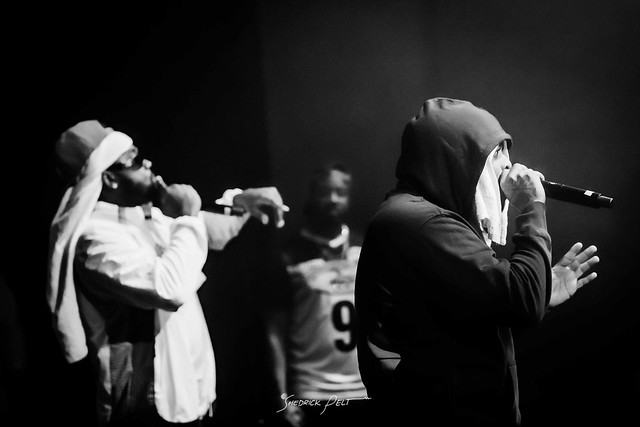 Welcome to the main event! This is a story. A story about a movement. A movement that is changing our world. This grass roots movement begins like most do, with a team. And as the team grows so does the legends. Legends of men made from machines. And others who’ve braved the coldest summers. Stories of the dead rising. And fearless leaders who came out of a cage to thrive and spread the gospel.

On June 13 at the Howard Theatre in DC, the Griselda Records artists Westside Gunn, Conway the Machine, and Benny the Butcher arrived in Chocolate City to etch their name is stone. Co-opting a movement, charged with bringing back a familiar era in hip-hop. An era when stories, of navigating the sometimes treacherous paths through life, were vivid, honest, raw and prophetic. An era when social media foolery wasn’t part of the album roll out. A moment in time when giants roamed the earth uninhibited by petty internet beefs. This is a mood we’ve all missed dearly.

A packed house at the DC landmark was primed for a great night of music. Momentum has been building since their Shady Records signing. Exclusive Griselda drip adorned the bodies of most of the attendees standing in a line outside stretching down the block. Inside, stage right of the DJ a local artist paints, a portrait of the trio, under a black light and on the big screen TVs were throwback videos of the World Wrestling Federation playing on repeat. You could feel a calm in the air as the loyal fans patiently waited for the bricks to drop, rehearsing their favorite bars with other excited fans around them. The goons proliferated the venue securing the area.

As the lights dropped the Buffalo, NY, brethren rushed the stage like a well orchestrated hit. I felt an instant chill from a considerable amount of jewels and precious metals hanging around Westside Gunn’s neck. He looked militant but with a fetish for fashion. The FLYGOD reassured the crowd that being a little under the weather wasn’t gonna slow him down — reminiscent of the Jordan flu game in ‘97! And much like that legendary game, his brothers were there to back him up.

Stream Tana Talk 3 by Benny the Butcher on Spotify:

Benny the Butcher was fresh off his Tana Talk 3 release, where he proceeds to give us a glimpse into the solid relationship between the Griselda rappers. Sprays up the whole trap with bars from some of his most popular records — inevitably relating everything back to drug dealing.

Stream Everybody Is F.O.O.D. 3 by Conway the Machine on Spotify:

Conway the Machine, with a white gym towel wrapped around his head looking like a turban, takes his customary shots at trump reaffirming why he’s the G.O.A.T. and with production from classic producers like Alchemist & Darringer blasting through the speakers overhead, you can’t tell me different. Everything about these moments felt familiar. New music music on the way!

The Almighty Tour cranks back up on July 25. Images below are from a rare night with Griselda Records at the Howard Theatre on June 13, 2019. All images and words copyright and courtesy of Shedrick Pelt.