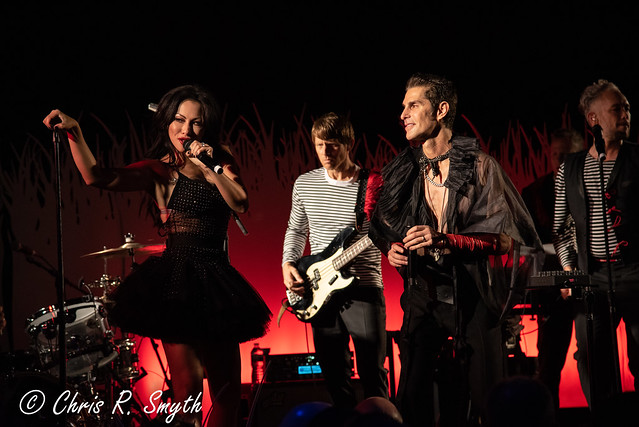 Perry Farrell (right) and Etty Lau Farrell, along with the Kind Heaven Orchestra, turned City Winery DC into a festival on June 19, 2019. (Photo by Chris Smyth)

On June 19, Perry Farrell brought his latest project, Perry Farrell’s Kind Heaven Orchestra, to City Winery in DC. In promotion of his first solo record in 18 years, Kind Heaven, Perry showcased his lovable eccentricity with a smile and swagger all his own.

While drinking wine straight from the bottle, and at one point raising his bottle of wine in the air to toast the crowd, Perry appeared at home on the City Winery stage. Throughout the show, Perry high-fived many of the fans in the front rows. And when he asked the crowd how they liked the “dinner theater” set up, the loud reaction of approval caused him to playfully respond, “I’ll turn this into a festival!”

Farrell’s Kind Heaven album was the reason for the night, and he proceeded to play the album in it’s entirety over the course of the show. The second song of the night, “Pirate Punk Politician,” is the album’s first single. Preceding the start of the song, a snippet of Donald Trump saying “Make America Great Again” played. Perry has called the song “a protest song about the rise of autocratic strong men around the world.”

On the set for our first video shoot of the first single “Pirate Punk Politician”. It is a protest song about the rise of autocratic strong men around the world… So my dancer friends and I did some free forming, and some choreography (which seems daunting but it’s really fun). pic.twitter.com/aulnNNeCBq

The pirate theme appeared to play a large part in the dress of Perry Farrell and the band. Perry was dressed like a high fashion swashbuckler, in a loose, black, button down shirt, wide black belt, black leather pants, and red, finger-less opera gloves. All of the male members of the Kind Heaven Orchestra were wearing horizontally striped shirts, looking like Smee to Farrell’s Captain Hook.

As the featured back-up singer, and often times co-lead singer, Etty Lau Farrell, Perry’s wife, played nearly as big a part of the stage show as her husband. The love song “One” allowed the pair to sing back and forth to each other, and it showed off a connection between the couple that could be felt throughout the venue.

Along both sides of the stage, projection screens played videos to each song. While all were outrageous in their own ways, the video for “Spend the Body,” a not-so-subtle song about having sex, was most titillating as it featured Etty dancing in a risque outfit, while she and Perry sang about the topic to each other on stage.

While the new music was well received by the the City Winery crowd, most people had purchased tickets based on their love of Perry’s former bands, and their desire to hear a few classic songs did not go unfulfilled.

Here are some pictures of Perry Farrell performing at City Winery on June 19, 2019. All photos copyright and courtesy of Chris Smyth. 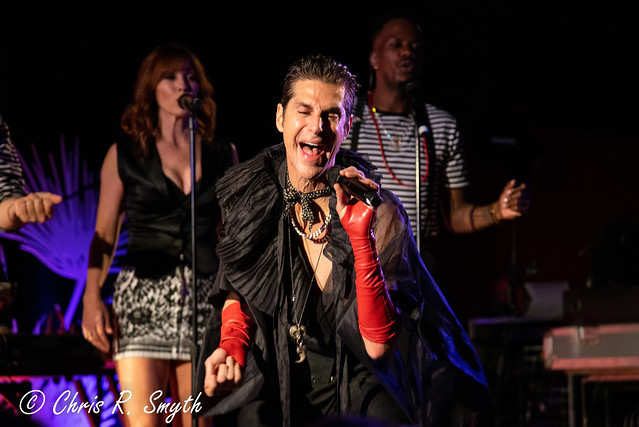 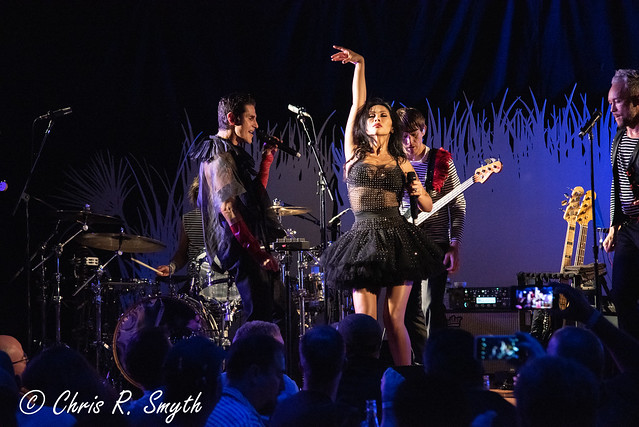 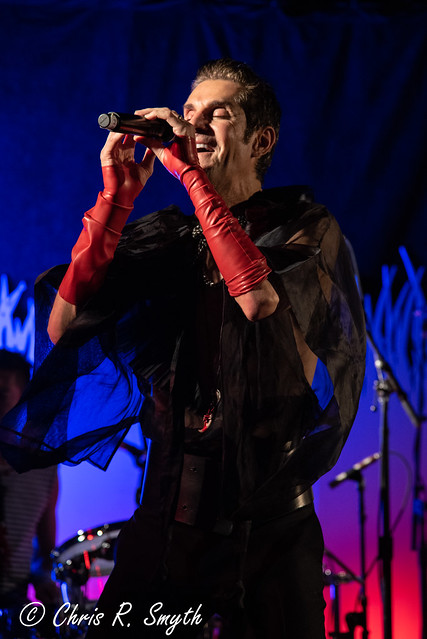 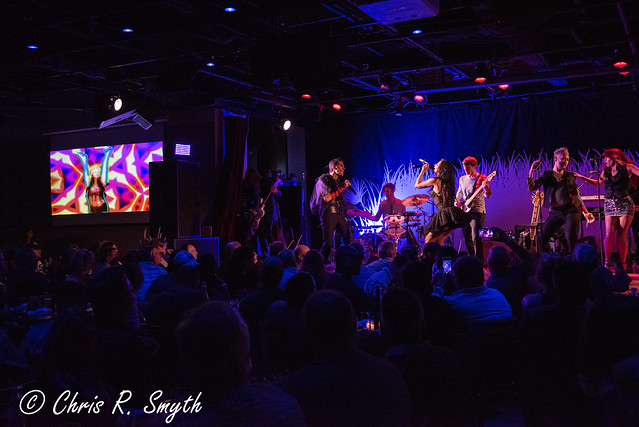 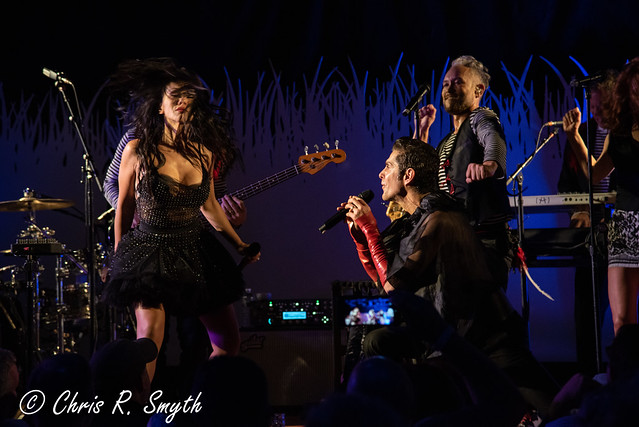 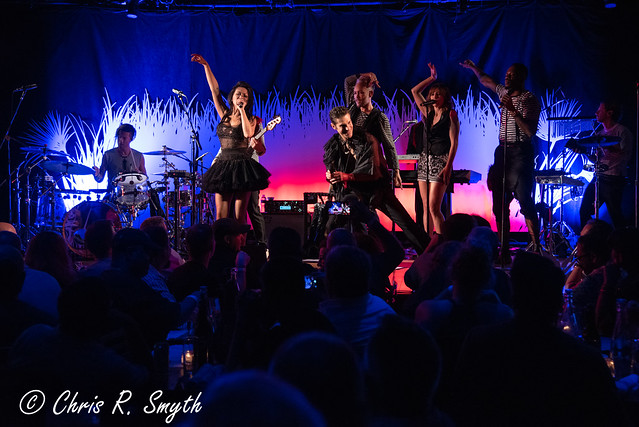 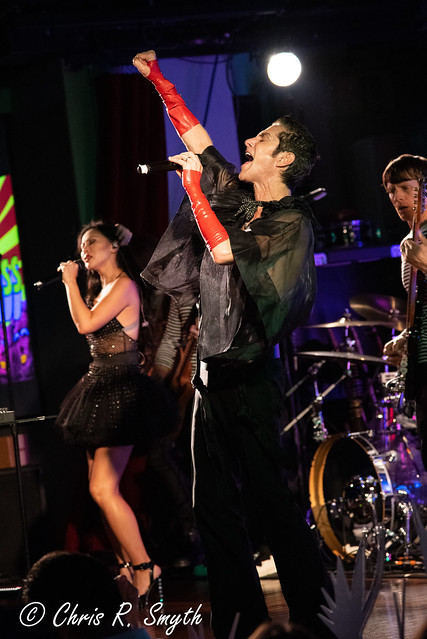 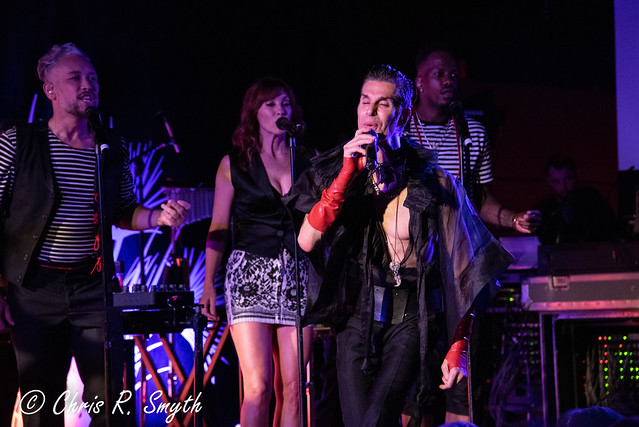 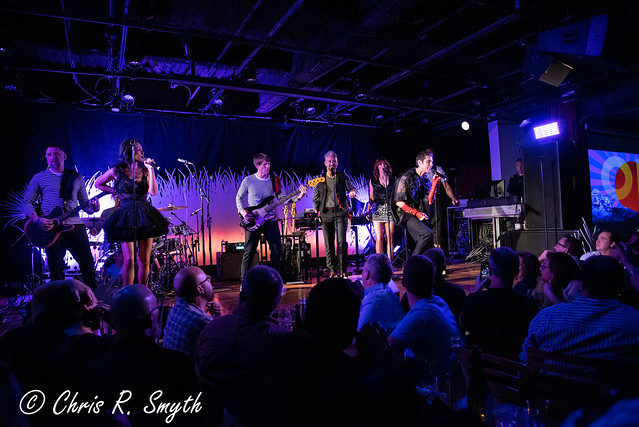 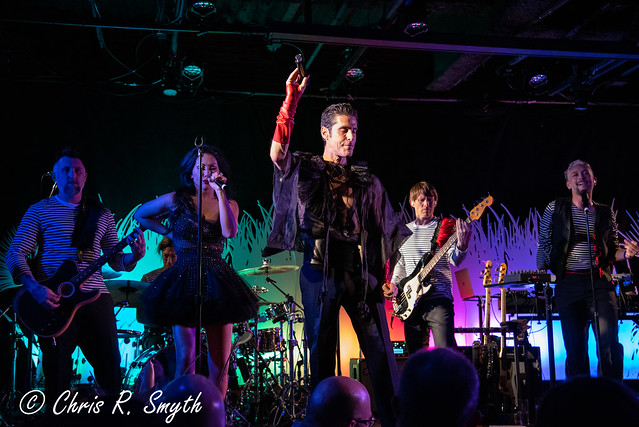 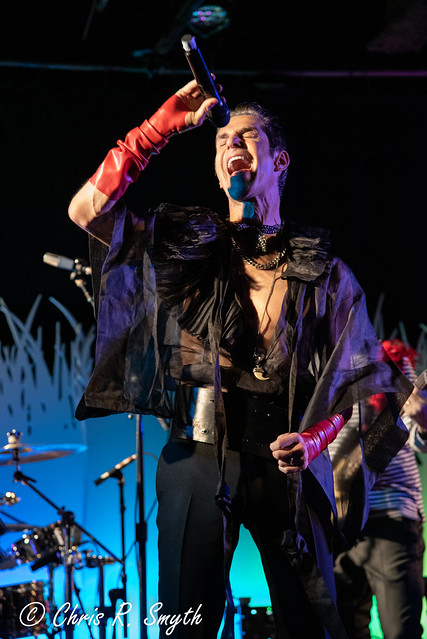 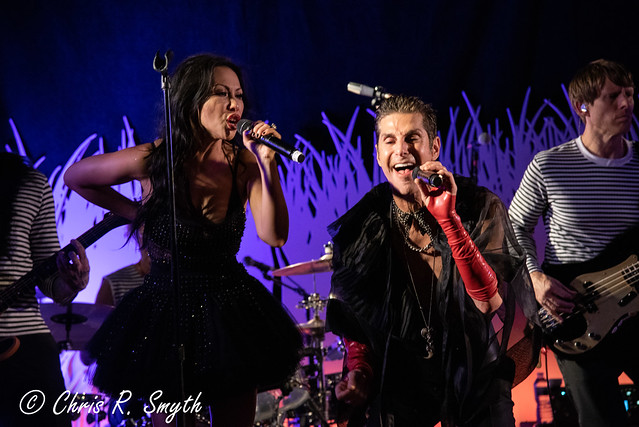 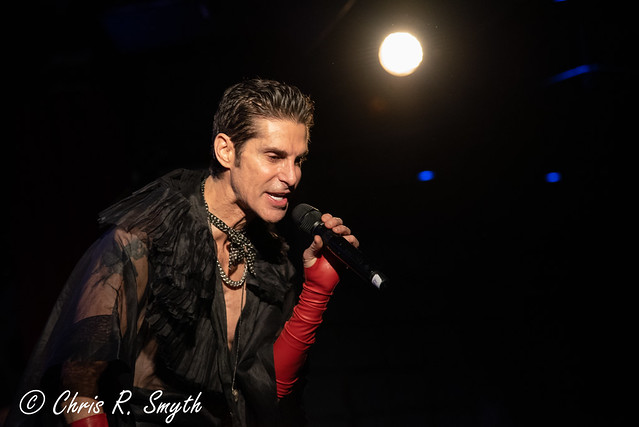 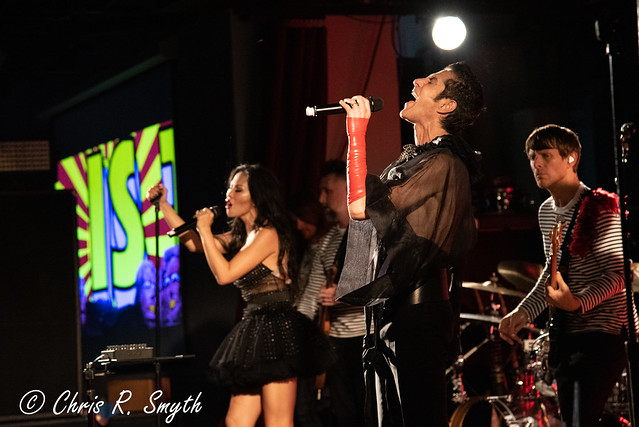 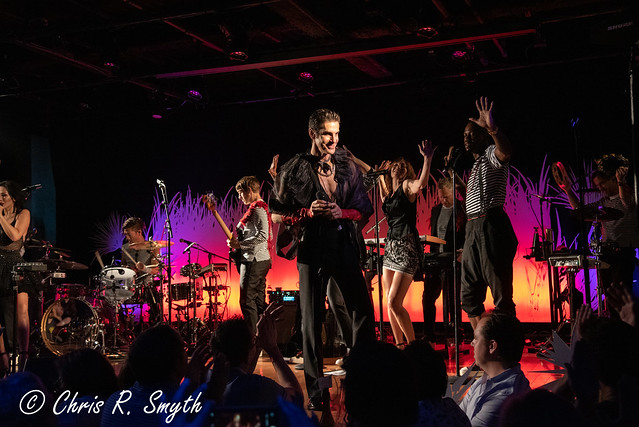 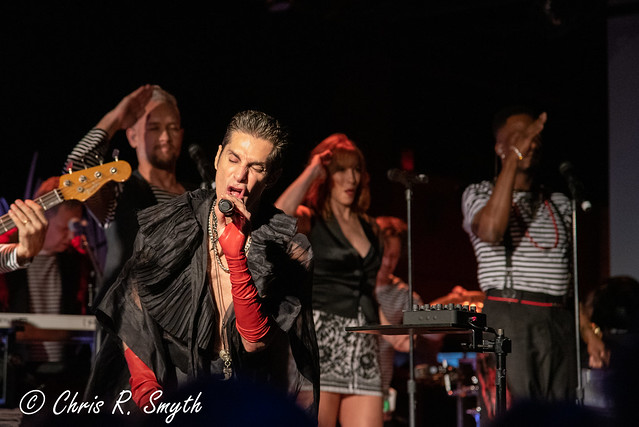 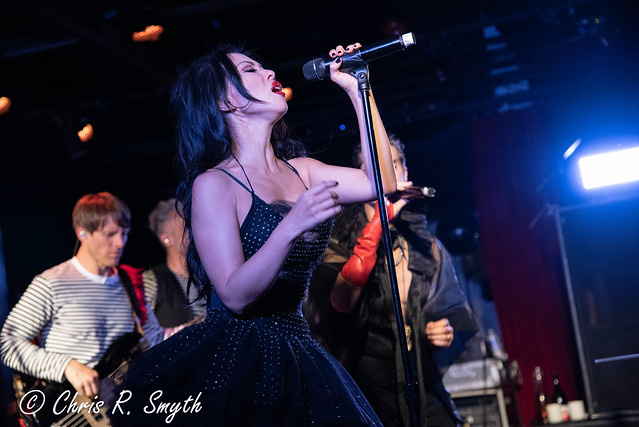 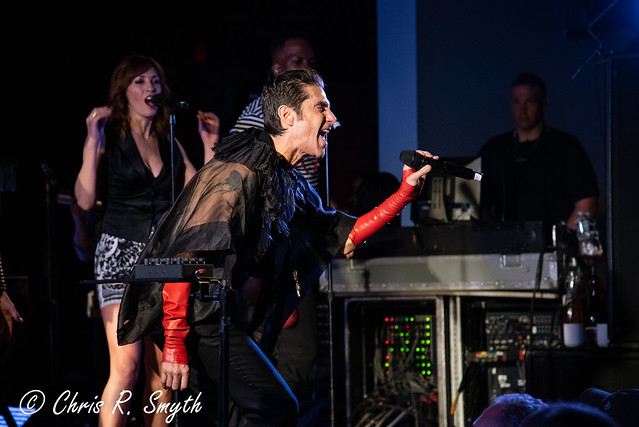 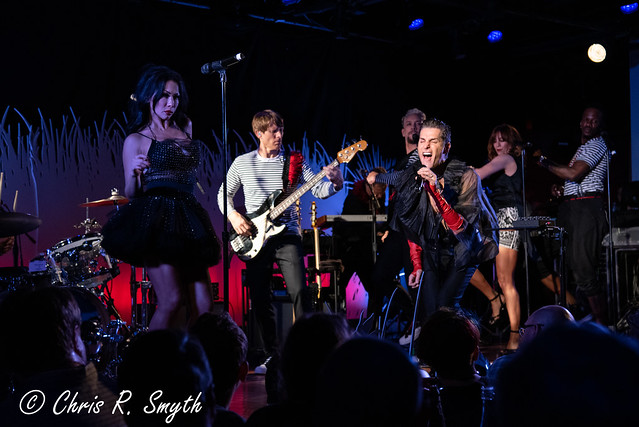 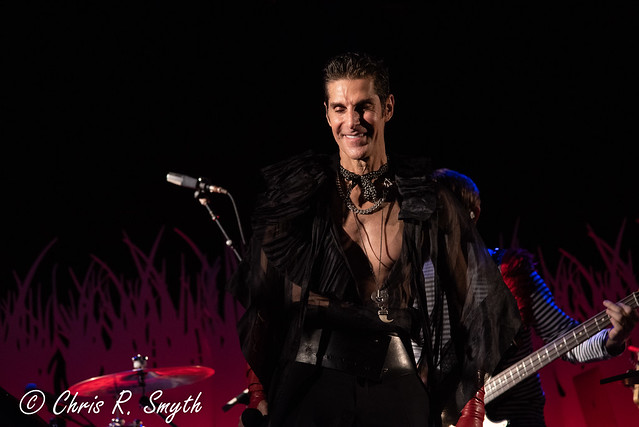 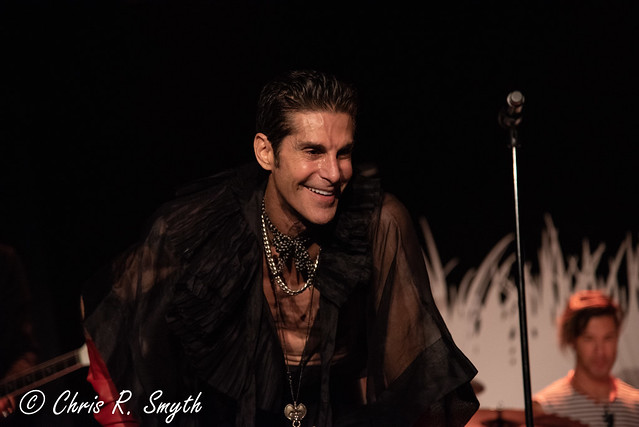 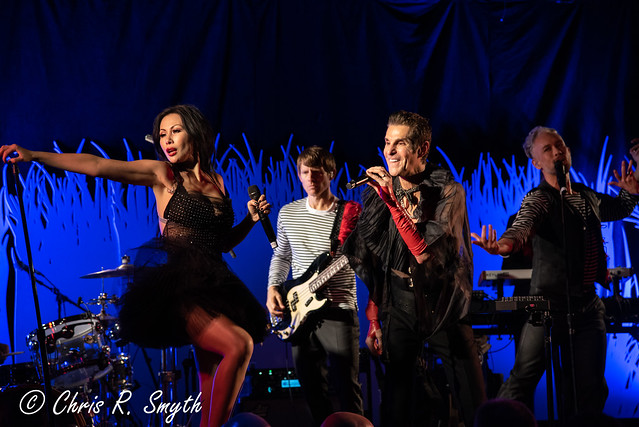 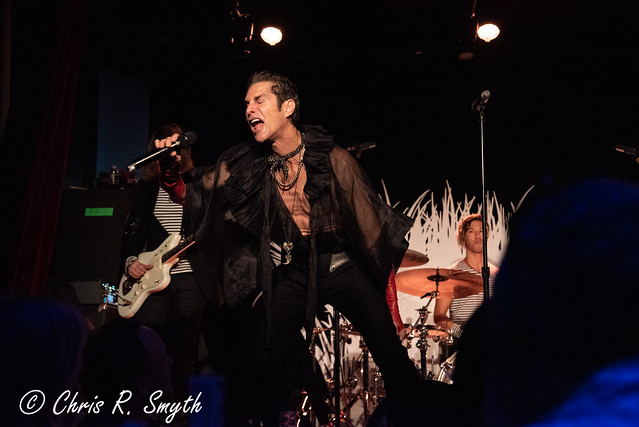