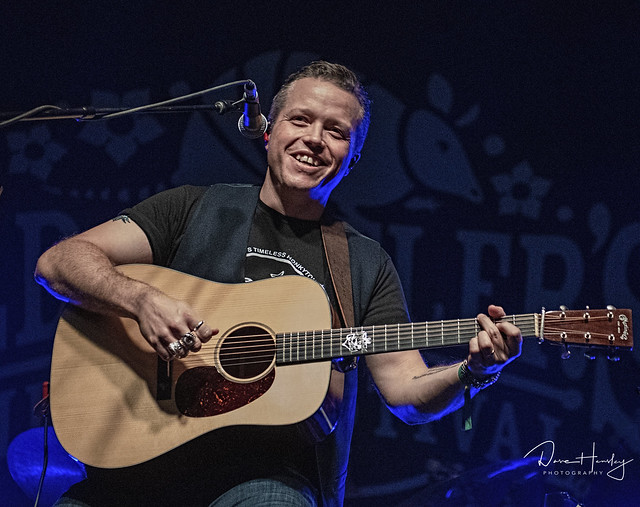 “There’s a specific kind of fucked up person who pays good money to see this much sad music,” declared Rockville native Father John Misty after he finished singing “The Palace” recently. After playing “Elephant,” co-headliner Jason Isbell told the crowd at Merriweather Post Pavilion, “That’s a sad song. I made the fucking thing up and I know it’s a sad song. I’ve sung it 150,000 times and it still makes me sad.”

Jason Isbell and Father John Misty might not look like a natural pairing for a concert double bill. But although they attract somewhat different audiences, Father John and Jason are closer to each other as artists than it might seem. Both are talented singer-songwriters with a gift for heartrending lyrics. A lot of the songs John played, like “Nancy from Now On,” had a strong pop feel, but others, like “Only Son of the Ladiesman,” had a hint of twang. (“Only Son” also had a pounding bass drum driving the beat.) It’s not that surprising; when Father John went by Josh Tillman (his birth name), he was the drummer for indie folk band Fleet Foxes.

Pairing up allowed Jason and John to sell more tickets. Last July, Jason played Wolf Trap; Merriweather Post Pavilion has almost three times the capacity. Even if John and Jason had to share the gate, they split a bigger pie. They appeal to different demographics: John’s fanbase skews younger, while Jason attracts a certain segment of country listeners. During intermission, I spoke with several groups of attendees on the lawn, confirming that those under 25 were largely there for Father John, while Jason attracted an older audience.

Jason got his start in a band, too: The Drive-By Truckers. He spoke positively about his time with the Truckers, saying that he had “a lot of good nights and a lot of shitty mornings.” He colorfully described how the Truckers would sleep in their van in Patterson Park, next to someone’s house. Once, drummer Earl Hicks was sleeping buck naked, still high on acid, when a couple of burglars approached the van. Jason told the audience there was nothing so terrifying as a just woken, naked Earl Hicks on acid — and he terrified the burglars, chasing them off in his birthday suit. Jason played two songs from his DBT days: “Outfit” and “Goddamn Lonely Love.”

Father John and Jason both offered poignant social criticism. With “Total Entertainment Forever,” which drew cheers and applause, Father John satirized our society’s need for constant amusement. He skewered religion and sexism in “Pure Comedy.” Jason told the audience that if opener Jade Bird were a man, she’d sell more tickets than either Father John or himself. Jason took aim at racial biases with “White Man’s World.” He showed his understanding for the nuances of white working-class culture in two very different songs, “Hope the High Road” and “Last of My Kind.” “Hope the High Road” condemned the anger and rage seen in some parts of white America, while suggesting a bettering path: Though the people he addressed may be “mad as hell, But wherever you are, I hope the high road leads you home again, To a world you want to live in.” “Last of My Kind” sympathized with plight of the narrator, who doesn’t fit into the slick, sophisticated modern world and struggles to find his place.

Stream The Nashville Sound by Jason Isbell and the 400 Unit on Spotify:

Father John’s lounge singer act is certainly idiosyncratic, especially on the scale at which he performs. He paused at the beginning of “When You’re Smiling Astride Me” to engage with a woman in the crowd. “Ma’am,” he asked, “were you counting the band members just now?” Exasperated, he continued, “I’ve never seen anything like that. Is that an OCD thing?” Just to mess with her, he told her, “It’s 38.”

Father John exuded confidence, even a fascinating arrogance. Between “I’m Writing a Novel” and “This Is Sally Hatchet,” he said, “Alright, everyone is enjoying themselves. Just phrasing it as a statement.” When he mentioned sad music, he went into and a back-and-forth with the crowd about anti-depressants. It took a lot of charisma to walk the line he strode between commiseration and condescension.

Jason’s recently gotten a lot of attention for the song he placed in the film A Star Is Born, “Maybe It’s Time.” Eddie Vedder covered it in concert. Jason told the audience that he doesn’t like to write songs for other people. He said that it feels like leaving work unfinished. When Bradley Cooper sent him his recording of the song, Jason put off listening to it because he was afraid he wouldn’t like it. He didn’t want to have tell Bradley he did a poor job. Bradley, it turns, was waiting by the phone for Jason to call him about it. Fortunately, Bradley did a pretty good job with the music in that movie. Jason half-jokingly suggested that there must be something that Bradley Cooper isn’t good at.

Both artists covered their big hits. Father John opened strong with “Real Love Baby,” and his set also included “Chateau Lobby #4 (in C for Two Virgins),” “I Love You Honeybear,” “Mr. Tillman,” and “Hollywood Forever Cemetery Sings.” After covering Fleetwood Mac’s “Oh Well,” Jason finished his encore with his Grammy Award-winning song, “If We Were Vampires.” He also sang about what can happen in “24 Frames” and his desire not to die in a “Super 8” motel.

And as he does every night, whether she is there or not — on this night she was playing with John Prine — Jason played “Cover Me Up” for his wife, Amanda Shires. The song expressed Jason’s ongoing commitment to sobriety and his love for his wife. So even this concert full of sad songs ended on a happy note.