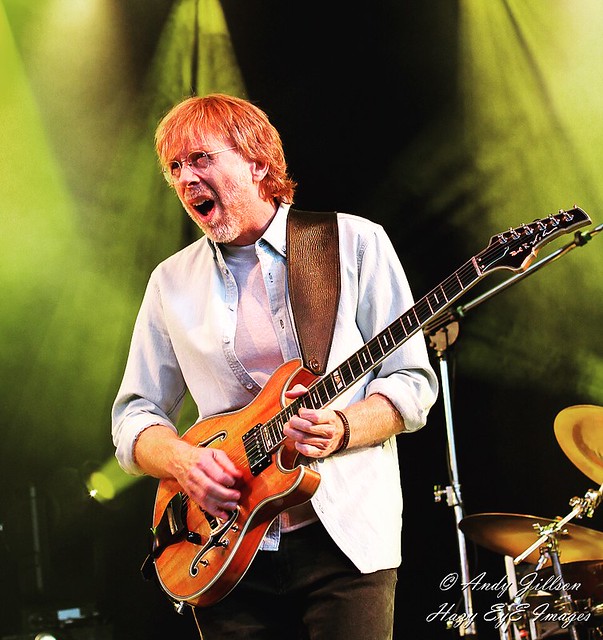 American jam band Phish performed to the utter delight of a stupified sold-out crowd at Merriweather Post Pavilion recently, and I was there taking photos and spacing-out to the music and getting into the groove.

Phish played two back-to-back shows at the beautiful amphitheater located in Columbia, Maryland, on June 22 and 23. I was fortunate enough to photograph Phish during their first set on the first night. Plenty of jazz cigarettes, funky fungus, barely conscious air-guitarists, and cheese sandwiches? Fuck it. It was a Phish show!

I was introduced to Phish around 1993-94 (when I was 15 or 16 years old). At that time I was new to psychedelic drugs, psychedelic music, and drug culture in general. The terms “jam band” and “musical improvisation” were also new to me. I had a few friends in high school that were apart of a weird pseudo-hippy click, and of course I fell victim. I was subjected to all things “psychedelic” by my new drug-taking, Grateful Dead-loving, patchouli-stankin’ ass high school friends.

Anyway, I have listened to many different groups baring the psychedelic branding, but I never cared much for your average mainstream psychedelic rock bands. Nor have I ever cared for pretentious non-stop guitar noodling for no apparent reason. Lots of well-received bands from the 1960s and 1970s that are held in high regard as pioneers of psychedelic rock and/or the jam band scene have always seemed bland to me. Phish, however, have never seemed bland at all, and the band certainly don’t come across as pretentious guitar-noodlers. Though I am admittedly not well-versed in all of Phish’s material, they seem to have taken some of the best bits of psychedelic music, progressive music, and improvisational music and injected a fair amount of humor, jazz, and funkiness to it.

The performance by Phish opened with the groovy-sounding song “Undermind.” This was the 17th time Phish had performed at Merriweather Post Pavilion, but the first time Phish guitarist Trey Anastasio chose that song to open one of their shows. Phish followed with songs “Tube,” “Funky Bitch,” and “Steam.” “Tube,” transitioning into “Funky Bitch” was the primary musical highlight of the show. The band played beautifully and sounded much jazzier and progressive than I expected.

Phish was having an absolute blast while performing, and the fans reacted appropriately with screaming, singing, twirling, and ear-to-ear smiles plastered across their sweaty faces. I didn’t quite have the same reaction, but Phish definitely pleasantly surprised me with their unique brand of good ol’ American rock music. And the light show during the second set  was on point! The whole of Merriweather was drenched in shades of blue, purple, yellow, orange, and pink. The colors and lighting were hypnotizing.

Stream The Baker’s Dozen: Live at Madison Square Garden by Phish on Spotify:

The band stuck to playing mainly older material for the remainder of their first set. Frontman Trey Anastasio and company played a mixture of old and new songs during their second set along with a healthy dose of improvisational playing interwoven throughout. Other songs Phish played that stood out to me were “David Bowie,” “The Squirming Coil,” “Ghost,” “Axilla,” and “Death Don’t Hurt Very Long.”

Overall, this was an entertaining musical experience for me, and it was a concert at Merriweather I’m sure to never forget. I was one of only four photographers (I saw) that was in the photo pit for this Phish show. We were only allowed to photograph the band from the pit for the first 15 minutes of their first set. I was in and out of the pit in what seemed like a blink. It honestly felt like 5 minutes.

I feel extremely fortunate, and I’m truly grateful for having had the opportunity to photograph such iconic artists artists whom have an obsessive cult following. I’m sure there are scores of Phish fans that would hand over their last cheese sandwich and bottle of patchouli for a chance to be standing directly in front of the band like I was.

Here are some photos of Phish performing at Merriweather Post Pavilion on June 22, 2019. All images copyright and courtesy of Andy Jillson.