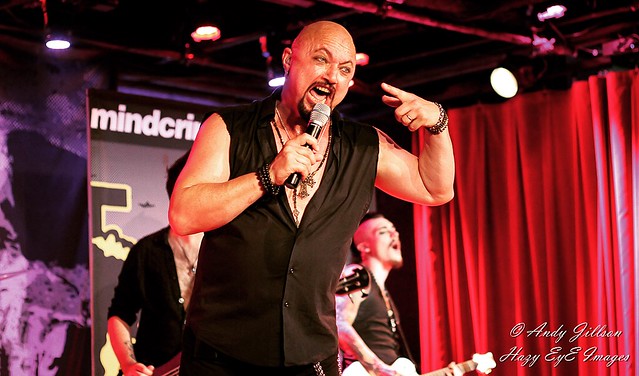 Geoff Tate and his band Operation: Mindcrime performed at City Winery DC recently, and I was there taking photos and reminiscing about the late 1980s. Geoff and the members of his current band performed Queensryche’s progressive metal classic Operation: Mindcrime in its entirety from beginning to end. It was a strangely magical evening brimming with with food, wine, laughs, and of course metal music.

Multi-platinum selling, Grammy-nominated singer/songwriter Geoff was the primary driving force behind Queensryche until 2013, and he is currently the creative push behind Operation: Mindcrime.

I wasn’t sure what to expect as I was being escorted to my table at City Winery on June 30. Images of Queensryche videos from my childhood flashed through my mind. I was reminded of how obsessed I was with Headbangers Ball during my adolescence. 1980’s MTV mind-fucked me with a barrage of swill-coated corporate rock. I must have watched thousands of hours of soulless music videos as a child.

Looking back, not all “metal” music videos played on MTV were dreadful. They did at one time play some decent music — not much, but some. Anyway, Queensryche always stood out to me among all other other hard rock and heavy metal bands of their day. Their music seemed darker and more technical — which to me just means more interesting and engaging. Queensryche’s music videos for the singles “Eyes of a Stranger,” “I Don’t Believe in Love,” “Jet City Woman,” and “Silent Lucidity” were played in heavy rotation during the late ’80s and early ’90s. I’m actually quite fond of those songs and the videos weren’t too shabby at the time either.

The band played great, appeared to be having fun, and proved that good music never dies. The fans absolutely loved the performance, and each member of Operation: Mindcrime individually played to the crowd. The songs didn’t seem dated and there was very little cheese factor. Geoff and his band fired on all cylinders, full of great singing, great guitar playing, technical drumming, and disturbing theatrics.

Here are some photos of Geoff Tate and Operation: Mindcrime performing at City Winery DC on June 30, 2019. All images copyright and courtesy of Andy Jillson.