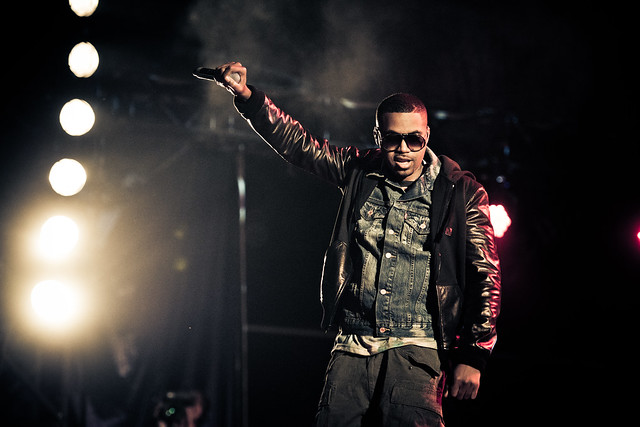 Nas performs at Les Ardentes Festival in Belgium on July 11, 2013. (Photo by Kmeron)

It has been 25 years since the release of Nas’s debut, Illmatic. The New York emcee recently reminded fans at Wolf Trap why many consider it the best hip hop album ever. Nas brought Illmatic’s vivid street tales to the Filene Center and created a truly cinematic experience with the help of the National Symphony Orchestra.

Depending on who you ask, there are about 10 overarching themes in film. Nas’s Illmatic covers at least half of them. On July 14, with a carefully constructed live score by the NSO, Nas documented the realities of his early adult years in New York’s infamous Queensbridge Projects.

Nas stepped onto the stage as the orchestra played the opening to Illmatic, appropriately titled “The Genesis.”

On the Illmatic album, the nearly two-minute intro established time and place. A subway train rattles by as Nas’s verse from Main Source’s 1991 posse cut “Live at the Barbeque” plays in the background. Nas’s verse is cut short of his audacious boast, “when I was 12, I went to Hell for snuffin’ Jesus.”

Nas’s brief appearance on “Live at the Barbeque” ignited a flame that would intensify each month leading up to the precocious 17-year-old’s debut album. Three long years later, April 19, 1994, to be exact, Illmatic would drop. The trailblazing album marked an evolutionary shift in hip hop.

The audience took their seats as the NSO transitioned from the intro’s optimistic crescendos to the foreboding notes leading into “N.Y. State of Mind.” On the song, Nas painted a picture of a war-torn New York rattled by the crack era and President Ronald Reagan’s draconian drug policies. The imaginative lyrics blended fantasy with harsh realities to depict inner-city life, angst, and rebellion.

“Thinkin’ of cash flow, Buddha and shelter
Whenever frustrated, I’ma hijack Delta
In the PJ’s, my blend tape plays, bullets are strays…”

Illmatic is a poignant hip hop coming-of-age story. A tale of a young man that places his faith in the rhymes that will deliver him from bleak circumstances. On “Life’s a Bitch” the protagonist begins by counting his blessings.

“I woke up early on my born day; I’m 20, it’s a blessin’
The essence of adolescence leaves my body, now I’m fresh and
My physical frame is celebrated ‘cause I made it…”

On the album, Nas’s father, jazz musician Olu Dara Jones, played a wistful trumpet solo to close out the song. “I asked him to play something that reminded him of when my brother and I were kids,” Nas told the Wolf Trap audience.

During the show, Nas explained to fans that he didn’t quite get his Dad’s “old people music.” “Why do you listen to music with no words?” he would admonish his pops. Nas let the fans in on a little secret. Despite his fronting, he actually liked jazz.

The “The World Is Yours” melded his father’s musical tradition with the then still-young vehicle for youthful expression, hip hop. Pete Rock combined a sample from jazz pianist Ahmad Jamal’s song “I Love Music” with his signature boom-bap percussion to create a texture beat both gritty and melodic. The song is an entreaty to overcome the trappings of the inner city and lay claim to a world of possibility. This point is made clear by the chorus.

Stream Illmatic by Nas on Spotify:

“Every time I listen to this record I picture myself on the basketball court with cracked concrete, the rim with no net, rusty, might be one bullet hole in the backboard. This is how we grew up. Regular life…”Nas told fans. The vivid memory preceded his performance of “Memory Lane (Sittin’ in da Park).” Violin bows ascended in unison as the evening’s poetic narrator elaborated.

“I rap divine, God, check the prognosis: is it real or showbiz?
My window faces shootouts, drug overdoses
Live amongst no roses, only the drama…”

U.S. Federal drug policies implemented in the ’80s and ‘90s resulted in unprecedented levels of mass incarceration. The staggering rise hit communities of color in the inner city the hardest. On “One Love,” Nas uses letters to imprisoned friends as a way to humanize the lives obscured by the statistics typically used to tell this story.

“What up, kid? I know shit is rough doin’ your bid
When the cops came you shoulda slid to my crib
Fuck it, black, no time for lookin’ back, it’s done
Plus, congratulations, you know you got a son
I heard he looks like ya, why don’t your lady write ya?”

Scene 4: Death as a Part of Life

Prior to his performance of “One Time 4 Your Mind,” Nas explained to the audience how important it was that he named his fallen friends in his songs. This way they are properly remembered.

Nas’s frequent invocation of his slain childhood best friend Will “Ill Will” Graham not only commemorates the man but shares the spotlight with someone no longer here in the physical form.

Scene 5: Man vs. Himself

Nas’s rhymes on Illmatic pull from two opposing forces. The temptations of fast cash, weed, booze, women, and inner-city nihilism straining against optimism, hope, and a righteous path through rhyme. Scarface versus Gandhi.

Nas takes the way of metaphorical debauchery on “Represent.” On the song, the lyrical giant assures Queensbridge residents that they can rely on him to rep them, as well as NY, for the decades to come.

“This sounds like Disney… in a good way,” Nas said of the NSO’s harmony at the beginning of “It Ain’t Hard to Tell.” The ninth and final song on Illmatic would end the NSO’s masterful accompaniment to Nas’s rhymes.

Fear may have hit many fans as the ensemble exited the stage. It certainly did for me. Was this the end of the show? Thankfully, no. Fans sat politely during Illmatic, but as if the parents had left the room, they lost all decorum when Nas began performing “The Message.” Everyone would remain on their feet for the remainder of the show.

Other highlights from Nas’s post-Illmatic set included performances of…

Nasir Jones continues his celebration of the 25th anniversary of Illmatic next on Thursday in Nashville and through Sept. 10, when the tour wraps in Toronto. Make it a priority to visit his website and find a date near you.