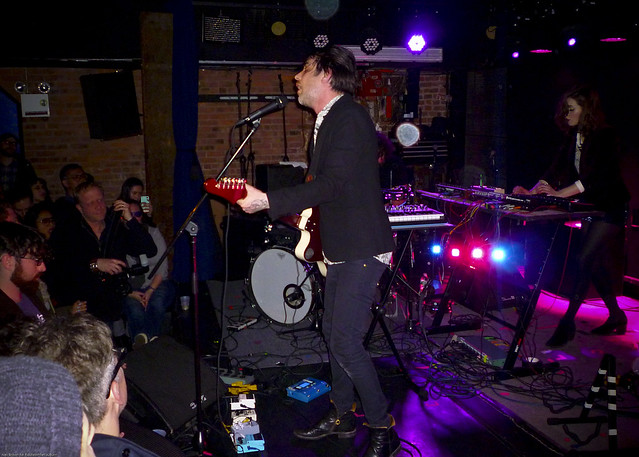 Dan Boeckner is a compelling frontman. The high-spirited crooner danced and weaved his way through an excellent show by his band Operators at U Street Music Hall recently, doing it all as he sang, strummed, and synthed his way through 14 gorgeous songs.

All the while, I couldn’t help but think of how Dan reminded me of Bryan Ferry on July 13. The two men possess a stage presence through a sort of classic movie star majesty while being moved by their music. Moreover, Operators drew their setlist mainly from Radiant Dawn, a second studio album released in May by Last Gang Records — a record that really resonates with the Roxy Music sound.

Operators were inspired by a sense of imagined nostalgia when crafting Radiant Dawn, and it carries with it the sort of haunted romanticism that was right at home on Avalon. Whereas Bryan can be a bit of a distant fashion figure, however, Dan prefers to roll up his sleeves and dig into the music. At U Street Music Hall, he slung his guitar to imbue new wave rhythms to the otherwise complex synth-driven tunes by Operators, occasionally handing the instrument off to synthesist Devojka to punch away at his own synthesizer to his right.

Early in the show, Operators, which also includes drummer Sam Brown, performed “I Feel Emotion,” a single from the new album, showcasing all of the terrific elements of the trio — Dan’s emotive voice and earnest dancing, Devojka’s addictive synthlines, and Sam’s rat-a-tat percussion.

Last year, Operators grabbed some headlines by capitalizing on Dan’s deep catalog of music with other projects. Specifically, they performed the songs of Handsome Furs, a band Dan formed with his ex-wife Alexei Perry for three albums about a decade ago. The Handsome Furs numbers were extremely well received, and Operators sold out early show featuring those records.

So, it was no surprise that the band injected the Handsome Furs material into their set on Saturday. Of 14 songs in the concert, Operators selected five songs by Handsome Furs for live performance. The comfortably crowded U Street Music Hall reacted particularly strongly to “Repatriated” from Sound Kapital, the Handsome Furs’ final 2011 record. “Repatriated” is more overtly rock and arguably more new wave than the comparatively mellow tracks of Radiant Dawn, and dancing broke out among the approving audience.

In something of a shame, Operators performed only one song from debut record Blue Wave — “Cold Light.” “Cold Light” certainly has a pleasing groove, and the band gleefully threw themselves into it. If Dan has occasionally inspired reviewers to compare him to Ric Ocasek of The Cars, it’s because of songs like “Cold Light.” Still, “Space Needle” was the best song on that debut album, and I was sad not to hear it!

All in all, Operators presented a strong evening of memorable songs, and we eagerly await their return to DC.