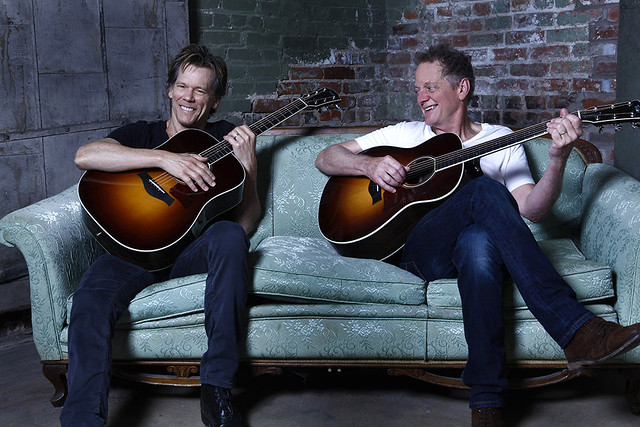 The Bacon Brothers — Michael and Kevin — launched their Shaky Ground Tour 2019 earlier this year, and the famous Footloose actor and his brother perform at The Birchmere for three nights *this weekend*! You can catch them on the first night — Friday, July 19 — and the final night — Sunday, July 21 — but Saturday is sold out.

“We’re excited to be playing some of our favorite places as well as discovering new ones. It’ll be fun to go out with some great new music to share!” said Kevin Bacon in announcing the tour.

Fiercely devoted to making music, even from an early age, The Bacon Brothers cite such varied influences as the Rolling Stones, the Beatles, Motown, Led Zeppelin, Philly soul, James Taylor, Pete Seeger, and Chet Atkins, just to name a few. The two siblings share a singular body of work that’s found them spending over 20 years working the road and paying their dues, resulting in nine albums, most recently the eponymous The Bacon Brothers (2018) — spanning rock, soul, folk, and Americana. Never content to be typecast, they’re fiercely devoted to the cause of making music, undeterred by fame, fortune, or the pitfalls that frequently obstruct the path to success.

Kevin Bacon is an award-winning actor with 80 films and dozens of television and stage credits to his name, resulting in numerous Emmy and Screen Actors Guild nominations. Older brother Michael initially began making music in their native Philadelphia before moving to Nashville, where his songwriting career blossomed by leaps and bounds. An Emmy-winning composer, he most recently scored Goodface Film’s Master Maggie, which premiered at The TriBeCa Film Festival. His other recent works include the audiobook: You Don’t Look Your Age… And Other Fairytales and the HBO documentary RX: Early Detection with Sandra Lee which premiered at the Sundance Film Festival last year.