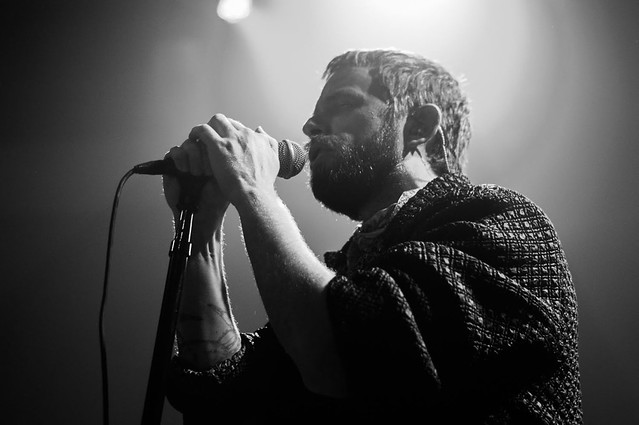 Hailing from Brooklyn, Yeasayer consists of Chris Keating, Ira Wolf Tuton, and Anand Wilder. The band took the stage at 9:30 Club recently under a simple, long, sequin fabric running from the ceiling to the floor, almost acting like a makeshift disco ball. Everyone set their instruments, and they were ready for the night to begin.

On July 12 at 9:30 Club, Yeasayer eased fans into the set, giving us two familiar cuts with “Madder Red” and “Henrietta” opening the show. It’s a little nerve-racking when bands play new material, and it is always suspenseful while we catch our collective breath to see the reaction to those new songs, but favorites such as “Sunrise” and “O.N.E.” appeared in between new numbers. So, the new songs felt like a good balance, mixed in with the super recognizable tracks.

In April, Yeasayer teased their fans by dropping a couple of singles and “Fluttering in The Floodlights” has to be one of the highlights from the new album. It has a catchy hook that will be stuck in your head — you’ll listen to it all day! Pair it with another new tune, “Ecstatic Baby,” and the summer is in full swing.

Yeasayer’s US tour officially ended at Webster Hall on July 13. The European leg of the tour starts in the beginning of August in Warszawa, Poland.

Here are some photos of Yeasayer  performing at the 9:30 Club on July 12, 2019. All photos copyright and courtesy of Brenda Reyes.