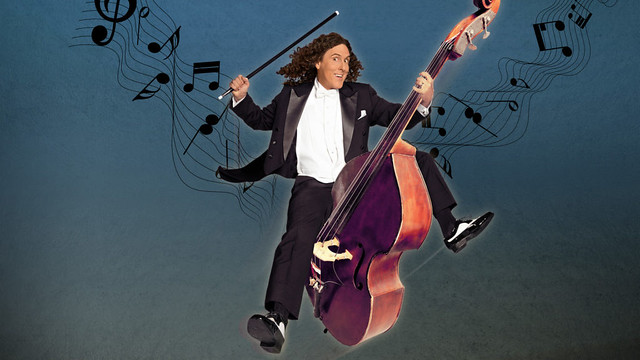 Some people view Weird Al Yankovic as “uncool,” as meant for geeks and nerds — for the weird kids. And while I certainly was one of those growing up, there were enough of us odd ducks at Wolf Trap to pack the place recently. And we got one of heck of a show.

Al is a consummate showman who delivered a performance that, more than anything else, was just plain fun. I’ve never found myself so completely giddy at a concert, singing along to almost all the songs. The material spanned Al’s career going back to the ’80s, and many of the evening’s songs are tied to the milestones of my life.

Weird Al was the first music I ever got into on my own. I don’t remember how I discovered him. I was about 10. I’d play my cassettes in the living room; I didn’t have my own tape player. If my family reads this, I am sorry for inflicting so much Weird Al on you.

On his current tour, titled Strings Attached, Al and his band are performing with a full orchestra. On July 16, the National Symphony Orchestra opened the show with several popular, well-known songs from film scores. They began with “The Raiders March,” the opening theme from the Indiana Jones films, composed by John Williams. Next, they played the theme song from Mission Impossible. The theme from Superman and the closing music from the original Star Wars are also John Williams compositions.

Weird Al began his set with a medley after a 20-minute intermission. A jazzy rendition of “I Lost on Jeopardy” led into footage from the music video, followed by segments of the classic parodies “I Love Rocky Road” (a parody of Joan Jett’s “I Love Rock ’n’ Roll”) and “Like A Surgeon” (Madonna’s “Like A Virgin”).

Al segued into “The Biggest Ball of Twine in Minnesota” by remarking that, while a lot of things are said about DC and the DC metro area, it’s not known for its twine rolls. Lest anyone believe that Al was inventing the subject of this song, it was accompanied by a slideshow of the aforementioned twine ball.

Next up was “Word Crimes,” a spoof on grammar, spelling, and the use of the language that parodies Robin Thicke’s “Blurred Lines.” For a writer like me, this song was a joy. I must confess to committing some of the sins that Weird One mentioned here on Twitter so that I can meet the character limit.

At the end of “Word Crimes,” Al shouted “Drum solo!” and rushed off stage. He came back having changed from his colorful shirt to a scientist’s get-up. Claymation played on the video screen as he sang “Jurassic Park” to the tune of “MacArthur Park.” Mid-song, someone brought out a chair for Al, who sat down and sipped a cocktail before getting back up to finish the song. “All the dinosaurs,” were, indeed, “running wild.”

Weighing in on a matter of controversy, Al “I don’t mind when people say happy holidays.” But, he said, sometimes he just wants to shout, “Happy Weasel Stomping Day!” Al’s band all donned horned Viking helmets, and they lined up together at the front of the stage. Claymation continued to rule the day, showing hilariously disgusting, bloody cartoon footage of weasels being stomped to death as Al and his band serenaded the crowd.

Al’s drummer and bassist left the stage for the next song, and Al remarked, “We’ll just have to get by with the 85 people on stage.” Al’s guitarist switched to an acoustic. Al himself strapped on an acoustic guitar that he kept teasing, but never played during “You Don’t Love Me Anymore.” At the end of the song, Al smashed his guitar. My friend Eugene, who came with to the concert and especially loves this tune, reminded me that this is straight out of the music of video.

The guitar decimated, Al bellowed “Tuba solo!” and the large, low-pitched brass instrument let out a few notes while Al changed into a visually arresting, colorful patterned shirt that epitomized the song “Tacky.” During the song, Al went into the audience, walking up the aisle stage left, joking around, at one grabbing a park ranger’s hat.

The next song, though very brief, was, Al explained, deeply personal — and it was one that he and his band hadn’t done until this tour, because it required a full orchestra to be done properly. Although just a few lines long, Al, his band, and the orchestra gave their all to “Harvey the Wonder Hamster.”

Al and his band emerged after the interlude dressed the like the legendary grunge band for “Smells Like Nirvana.” In full parody mode, Al drank from a plastic cup, gargled, and spat into the first few rows, then chucked the cup.

More videos followed, including footage from a 2010s show called Transformers Animated, which featured Al’s song, “Dare to Be Stupid.” Al and his band wore the concentric hats made famous by Devo and some kind of bizarre robes for the song.

Another clip played featuring a scene with Michael Richards from the late ’80s cult classic UHF. The scene cut, and Al rolled in on Segway Scooter wearing a do rag for “White & Nerdy” (a parody of “Ridin’ ”). The band had dressed in shirts and ties — they looked like the IT department.

A fake trailer for Weird: The Al Yankovic Story aired before the last song of Al’s set. You really have to admire what went into this. The trailer had Aaron Paul as Al, Gary Cole as his father, Olivia Wilde as Madonna (his lover), and Patton Oswalt as Dr. Demento.

Returning in all black and a fake beard, Al rapped “Amish Paradise,” his parody of Coolio’s “Gangsta’s Paradise.” The crowd wave their hands from side to side along with Al.

When Al left the stage, the lights didn’t come on. After a short delay, he returned wearing Jedi robes, accompanied by Darth Vader and Stormtroopers. For the first song of his encore, he delivered “The Saga Begins” to the tune of Don McLean’s “American Pie.” The crowd sang along as the costumed characters danced.

The stage cleared, but the night was not over yet. Al came out with his accordion, playing “Yoda,” a parody of the Kinks’ “Lola,” told from the perspective of Luke Skywalker. It wouldn’t be a Weird Al show without the accordion, and he brought the fire. Or, the force, I guess.