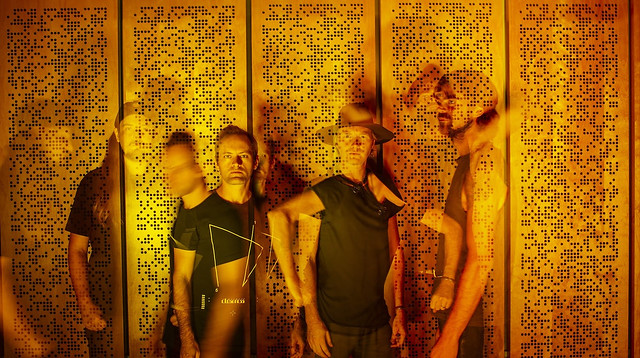 The Faint returned with an 11-track deep-dive into themes on modern society, the internet, and ego — specifically social media and its dark effects, on their latest album Egowerk, released earlier this year via Saddle Creek. Now, The Faint appear at 9:30 Club on Saturday, Aug. 3, in support of the Egowerk 2019 Tour!

Made up of vocalist Todd Fink, drummer Clark Baechle, keyboardist Graham Ulicny, and guitarist and bassist Michael ìDaposeî Dappen, The Faint are no strangers to 9:30 Club, where they channel raw energy into a surprisingly beautiful electro-synth experience.

“The heat is what always gives me this excited energy to play harder. Like when youíre in a sauna. You want to make it hotter and hotter and see how much you can handle,” Todd said.

Watch the official music video for “Child Asleep” by The Faint on YouTube:

Self-produced and recorded at Enamel Studios in Omaha, the new collection of blistering tracks has received accolades from Pitchfork, PAPER Magazine, Under The Radar, and Stereogum — and it has been hailed on the “best music released so far in 2019” list by The Omaha World-Herald.

“As usual, the music is fitfully vicious. Opener ‘Child Asleep’ may be The Faint’s most colossal track yet, a gnarly frenzy of rumbling 808s and electric jolts. Self-producing has served the band well; the drums have the uncanny synthetic clap of techno, yet they sound like they’re reverberating off of real walls. It won’t surprise anybody who’s caught their live show that the group is still in fighting shape,” Evan Rytlewski said for Pitchfork.