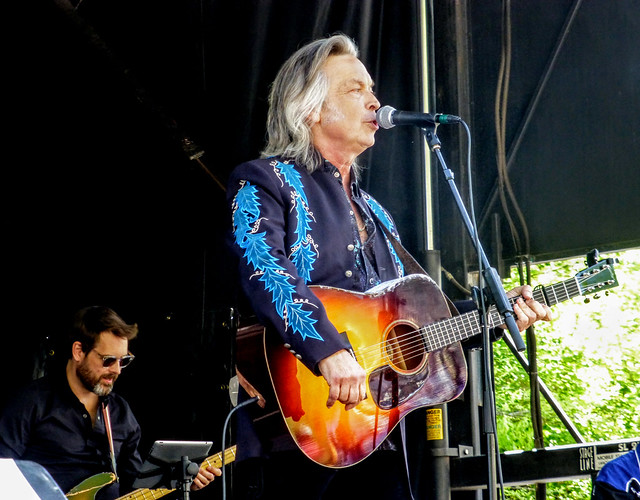 Jim Lauderdale performs at MerleFest on April 27, 2019. (Photo by cp_thornton)

Introducing his “King of Broken Hearts,” Jim evoked an image of a tearful Gram musing on George Jones. Gram and George weren’t the only deific figures of the genre who received a nod. To open the show, all three artists hit the stage to sing Hank Williams’s “Honky Tonk Blues.” Jason sang a blistering cover of Hank’s “Lost Highway,” and he made you believe that this former Illinois farm boy really has lived a life of sin.

Stream EMI Years, a compilation by Jason & The Scorchers on Spotify:

Jason may be older, but he hasn’t lost any of his moves from his Scorcher days. “I can still rock hard as ever, by God,” he told the audience, with a certain aww-shucks character to his boasting. “It does take longer to recover,” he admitted.

When he lived west of Nashville, Jason was neighbors with legendary singer-songwriter Steve Earle. His first wife was friends with Steve’s fourth. Humorously, Jason mentioned that Steve would send his little dog into fits of conniption. The two collaborated on “A Bible and a Gun.”

Bob Dylan got not one but two songs over the course of the evening, and they were boths highlight of the show. To close out the first half of the program, all three men sang “You Ain’t Goin’ Nowhere.” The Byrds, then including Gram Parsons, famously brought that one into country-rock on their seminal album Sweetheart of the Rodeo. The guitarist in Chuck’s band, the Grassy Knoll Boys, contributed a dazzling solo, and the audience spontaneously began clapping along to the beat. For their encore, all three artists performed “Absolutely Sweet Marie,” an old standby from Jason’s Scorcher days.

After the opening number, Jim took the stage and did a few songs with the Grassy Knoll Boys. He started with a song he wrote with O.D. Blackman, “She’s in a Honky Tonk Mood Again.” Next, he did the title track from his latest album, released earlier this summer, “From Another World,” written with Mando Saenz.

Stream From Another World by Jim Lauderdale on Spotify:

Jim is known for his stories, and he told a great one. The first time he played at The Hamilton was for Grammys on the Hill, which promoted the rights of songwriters to lawmakers. He saw one of his heroes before the show, Smokey Robinson, and went up to say hello. Smokey hugged him and asked him how he’d been. As he was walking away, Jim realized that Smokey had mistaken him for Neil Young.

Jim continued his set with “Secrets of the Pyramids.” Logan Ledger co-wrote that one and contributed the title. Jim heard the phrase, and he found it irresistible. The song is a rumination on the secrets of lost time, a country elegy to the world’s deep and inscrutable mysteries.

For the last number in this segment of the show, Jim sang a tune young he wrote with young Lafayette, Louisiana native Sarah Douget. During a songwriting session, Jim was briefly called away, but he promised that Sarah he’d come back. She said, “I’ll forgive you if you don’t,” and a light flashed for Jim — here was the title of a song!

Jim brought out Jason, whose red, flashy attire, including a sort of stage, contrasted with Jim’s more laidback button-down shirt and blue jeans. Jim talked about meeting Jason at the New York City rock club the Ritz in 1984. Jim had briefly gone to Nashville after college, but he couldn’t make it, so he moved to New York in what his friend Buddy Miller called “the Great Country Scare” of 1980.

As one of the early alt-country acts, Jason and his band, The Scorchers, blended classic honky-tonk influences with punk rock. The country-rock style of the Outlaws had given way to more staid urban cowboy pop leanings in the early ’80s, and Jason found himself playing more to rock crowds than country audiences. His performance, taking the mic in hand and violently gyrating across the stage, owed more the traditions that lead back to Chuck Berry than George Jones, even if there’s some of both lineages in his music.

Jason’s first tune, a little number about John the Baptist, could easily have been arranged as a country gospel, but was done uptempo with racing guitar and a driving bass line. He introduced a little bit of local flavor to the show, bring out Baltimore’s Artie Hill to join him for the next song, “Looking Back Blues.” Artie wrote the verses, and Jason put together the chorus, with its wordplay of “I don’t mean Luckenbach, Texas,” punning on Waylon Jennings.

After “Lost Highway,” Jason brought out Chuck, who pulled off a look similar to but cleaner than Clint Eastwood in his spaghetti Western roles. Jason said that he met Chuck in his hometown of Lawrence, Kansas in 1982. He put over Chuck’s accomplishments: Chuck won a Grammy with BR5-49, and he worked as the music director for the Broadway show Million Dollar Quartet. (He went on to direct music for its TV spinoff, Sun Records, as well.) The two performed a Jason & The Scorchers song, “Harvest Moon,” harkening to the autumn nights of their youths in the Midwest.

Taking over the show, Chuck returned the favor to Jason, and said, “There wouldn’t have been a BR5-49 if it hadn’t been for Jason Ringenberg.” Chuck highlighted songs from his new album, released last month. He began with a drinking song, “Tap into Your Misery,” which was all about “the 100 proof kind.” “Daddy Worked the Pole” highlighted the weird, wonderful, magic of this evening. With a chorus of “Daddy worked the pole so momma wouldn’t have to,” this is a strange, clever, and completely unique working-class song. Too off-center for radio play, this one put the smiles on the audience’s faces, hitting them in their funny bones.

Stream Close to Home by Chuck Mead on Spotify:

Getting on pretty good roll, Chuck followed that with the title track of the new album, “Close to Home” — as in, “it hits close to home.” Something seemed very familiar about the last song of his set. At first, I was able to place it as having a ’60s character. As the fat, grooving notes of “Shake” continued, the similarity became obvious to me: It is, as Chuck later confirmed, in the style of Creedence Clearwater Revival. DC got a little taste of California-country-swamp-rock, thick as fresh piping Bay area gumbo on a cold San Francisco day.

Chuck bookended the intermission, opening up the second half of the program with “Big Bear in the Sky.” “I’m Not the Man for the Job” had just the right amount of Tex-Mex flavoring, which is brought out even more by the horns on the album. Declaring that “you don’t need a credit card to get inside,” Chuck validated his hardscrabble juke-joint credentials on “There’s Love Where I Come From,” a letter from a far-out place beyond to an earlier time when the fuzziest of line separated rockabilly, country and rock’n’roll.

After singing “The Man That Shook the World,” Chuck brought out Jim. Jim sang one, and Chuck accompanied him on electric guitar. Chuck left the stage, and Jim introduced the next song, “We Really Shouldn’t Be Doing This.” Jim said he get lucky with this one, and George Strait recorded it on his 1998 album, One Step At a Time. Buddy wrote “Wild on Me Fast” with Buddy Miller. The two co-host a regular Sirius XM on Outlaw Country Radio. He closed out his segment with a song recorded by Dave Edmunds and Patty Loveless, “Halfway Down.”

Jason came out for the last individual segment of the show and opened with “Bible and a Gun.” For his next tune, he covered songwriter Hugh Daneel’s “Almost Enough.” Hugh fronted a band called Woodbox Gang, but he went to Leavenworth Prison for three years, which put quite a hitch in his career.

The crowd cheered when Jason announced “Broken Whiskey Glass,” the first song he wrote after moving to Nashville in 1981. “God Bless the Ramones,” he told the audience, was written in Sequoia National Forest. He was inspired by the Lt. Col. Charles Young Tree, named for the first African American to reach that rank.

Jim and Chuck returned, and the three sang the country classic “Six Days on the Road,” then returned to do “Absolutely Sweet Marie” for an encore. After the show, a good portion of the audience stuck around to get merch signed and meet with the artists, all three of whom greeted the crowd. There was a real sense of connectedness and intimacy, and a shared passion for the music we love.